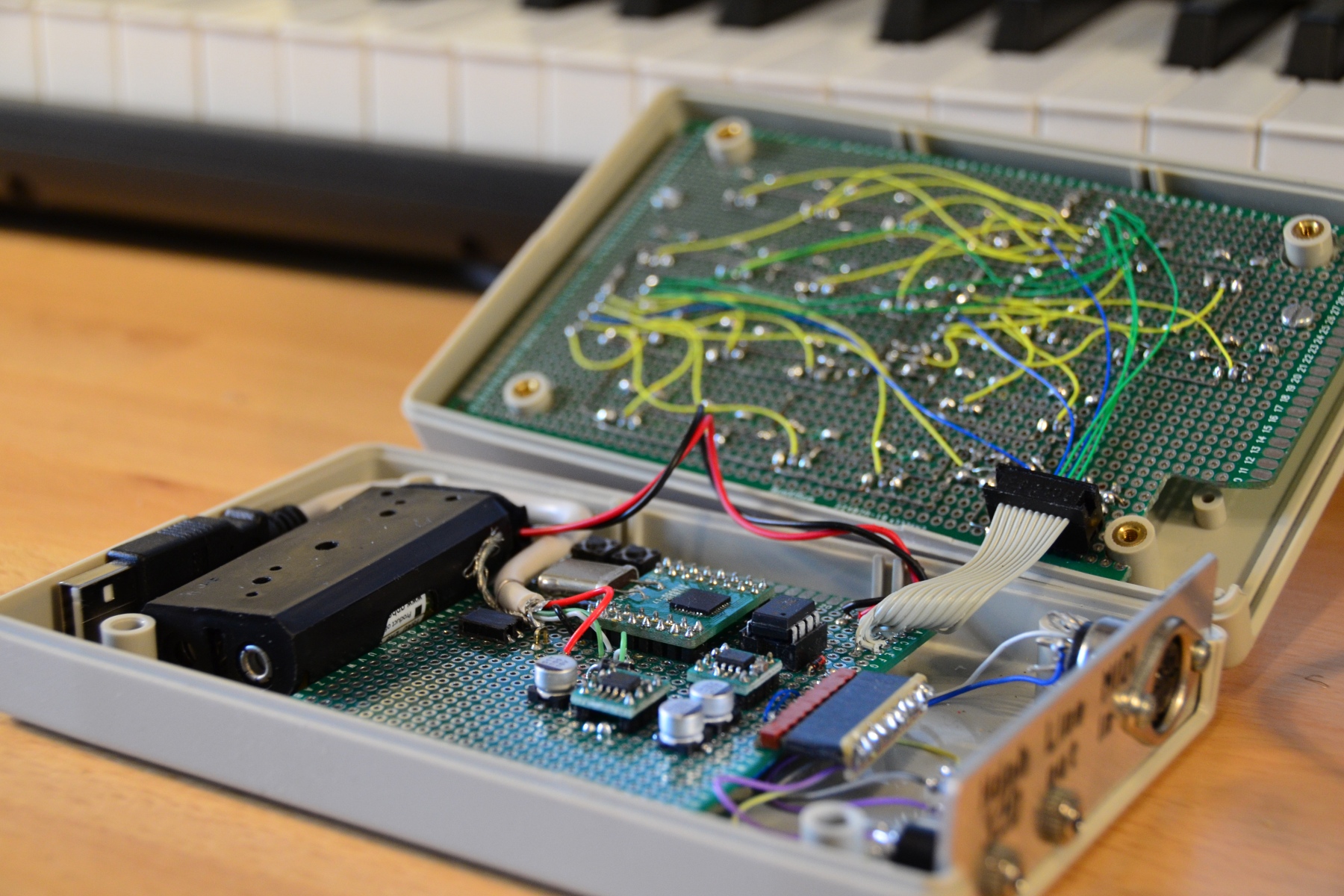 This article, created by William Stokes, was published by Musicradar, August 23rd, 2022.

Please note that all (c) are with the author and Musicrader.

From radioactive synths to sound-generating baby dolls, we survey the strangest DIY creations in electronic music-making.

The urge to reinvent the norm and defy convention is intrinsic to electronic music’s culture.

Even at the very dawn of the electronic music age, inventors sought new and novel ways to use the faculties available to them to enable the creation of sound and music; empowered by the fact that an instrument’s physical shape or size no longer had a direct relationship with the sound that it made.

The world of electronic instrument-building has never been more dynamic or accessible than it is now, with more and more developers outdoing themselves each year with weird, wonderful and occasionally outright creepy designs. It’s proof that despite the comparatively narrow spectrum of instrument and interface designs dominating the mainstream, lateral thinking is by no means in short supply – if you know where to look.

One key area of experimentation has always been in the realm of control and playing technique. For Leon Theremin in 1928, it was the movement of human limbs through the air. For Daphne Oram in 1957, it was light. The aesthetic design of an instrument also speaks volumes about its creator’s vision for its application. Bob Moog is said to have adorned the Minimoog with walnut so it could better fall into line with classical instruments, while Teenage Engineering’s modern classic, the OP-1, playfully channels the look of the cheap and child-friendly Casio VL-1.

Unconventional methods of sound generation are another key element in novel instrument designs. Never have the worlds of kinetics, acoustic sound and electrical oscillations been more closely intertwined, no doubt due in part to technological developments in all three areas, leading to some truly fascinating concepts. Some instruments, on the other hand, make no sound at all, instead sending MIDI or CV signals to influence and integrate with the character of something else.

Whether mass-produced, one-of-a-kind or not for sale, each instrument in this list speaks volumes: about its potential uses, its aesthetic context and, perhaps most of all, its maker’s philosophy of what it means to create music and sound.

Lomond Campbell is a Scottish musician and instrument designer, whose designs combine form with function in fascinating ways. His latest design, the Unsung Machine, is a brass and walnut instrument that uses combinations of letters, inputted via eight letter wheels, to fire off combinations of MIDI CCs. Two other wheels, Record and Play, allow for storage and playback of the CCs from particular words, and it even has a little receipt-style printer to ‘save’ particular words.

“I was looking for a meaningful way to incorporate language into music that bypassed the convention of hearing words being said or sung, so I built The Unsung Machine,” says Campbell. “The innumerable combination of letters provide an endless randomisation of musical parameters, and in this way the machine becomes a kind of co-producer, sitting between me and the synthesisers.” You can see the Unsung Machine and even submit words for it at Lomond’s website

Instrument creation doesn’t get much more daring than this: a Ukrainian musician named Sherman Drozd has salvaged a headlight from a bombed-out Russian tank and used it as the chassis for a synthesiser. “I went to deliver humanitarian aid to the village of Dmytrivka in the Kyiv region, where active hostilities took place,” said Drozd. “There are a lot of destroyed military vehicles — in particular, the tanks that were destroyed by the Javelins. I decided to collect some trophies that could be used in the construction of synths.”

The result is the Psychedelic Soldier (named in reference to ‘Apocalypse Now’): a CV-controllable noise machine that glitches, growls and hums with all the character you might expect from such a maverick creation. “The only problem was painting the headlight,” Said Drozd. “It was so badly burned that it was quite difficult to paint it well in different colours and cover it with varnish. However, after several attempts, I succeeded.” Drozd runs a Telegram channel called Synth Ethic that explores all things DIY. It’s in Russian, but there’s plenty to explore with some help from Google Translate.

The NuRAD takes the wind controller format to a whole new dimension, looking more like an instrument from a Star Wars cantina than a MIDI device. Played like any acoustic wind instrument, the controller is compatible with both DIN and USB MIDI and features touch keys, a lever for vibrato or portamento, octave ‘rollers’, pitch bend pads and even a little OLED display with menu buttons. Its array of sensors is staggeringly well-constructed for musical expression, with a breath sensor, lip sensor and pneumatic bite sensor in the mouthpiece alone.

Created by boutique designer Berglund Instruments, the NuRAD follows a similar design called the NuEVI and is made-to-order. “I am just starting producing these new wind controllers, built to order in a small scale fashion,” says the developer. “They are made available to interested parties on a first come, first serve basis.” It’s available in a range of futuristic colours, too, from Radioactive Green to Kind Of Blue.

“My name is Dave, and I really like making things,” says Dave Cranmer, aka Nervous Squirrel. The British designer’s creations range from the quirky to the ambitious to the ridiculous, employing electronics, robotics, fibreglass, pneumatics, programming and much more to realise his various visions.

Synth Creatures is a series of alien-looking steel creatures with fully integrated analogue synthesisers, audio effects processors and samplers. The Creatures range from the completely alien to the animal-inspired, featuring an assortment of forms and functions. Some are CV-controllable, while others are simply based around grids of buttons or knobs.

A particular standout is the Programmable Musical Pig, which hosts 56 arcade buttons to trigger interchangeable banks of audio samples. It also has a useful handle on top for easy transport. Prospective customers are encouraged to contact Cranmer with novel instrument ideas.

Brooklyn-based developer Physical Synthesis has found a way to synthesise sound without electrical oscillations at all. The modular Cicada Acoustic Synthesizer system consists of a selection of ‘soundboards’, with surfaces made of various materials such as wood or EVA foam, and interchangeable ‘bridges’, which look a little like variously-shaped wings. The bridges transmit vibrations from voice-coil motors to beat incredibly fast against those surfaces and create tones. Harder surfaces, like wood, will sound brighter, while softer materials will sound more filtered down or bassy.

Physical Synthesis call it the “ultimate sound generator,” and they have more than a little critical acclaim to accompany that grandiose statement: the Cicada impressively took home the Judge’s Special Award at the Guthman Musical Instrument Competition 2022.

Initially conceived as creator Elias Jarzombek’s thesis project, the Abacusynth is a synthesiser with an interface inspired by one of civilisation’s oldest designs, the abacus. The instrument’s four horizontal rods each hold a shape, ingeniously designed around a fidget spinner toy, which can be spun, slid, moved and manipulated.

These in turn trigger light sensors built into the Abacusynth’s frame to generate sounds, with additional knobs for parameters like waveform and harmonic allowing for further tone-shaping. “Just like an abacus is used to learn the fundamentals of math,” explains Jarzombek, “the Abacusynth can be used to explore the building blocks of audio synthesis.

Although the Abacusynth is not yet available for public consumption, Jarzombek has plans to expand the synth’s design, with ideas on the table including different shapes for the rods and even the prospect of breaking it down into individual modules. What is currently available, however, is a plug-in version for Ableton Live, which you can play online or download on Elias’ website.

The Baby Bot may well take the prize for the most outright creepy instrument on this list. Developed by Moon Armada, a self-described ‘audiovisual art project’, the Baby Bot series of instruments ranges from all-in-one analogue drone, noise and FX-generating synthesisers to light-triggered theremin designs and delay units.

They come in a slightly disturbing array of colours, from jet-black to bright red, with varying amounts of arms and occasionally some rather interesting looking eye designs. An array of knobs, buttons and switches stick out of the heads and bodies of the various Baby Bots, controlling parameters like envelope and frequency. As you might have gathered, each of these is housed in a chassis comprised of a repurposed baby doll, which, in an era of component shortages, is at least one part unlikely to be in high demand.

Gothenburg, Sweden’s Love Hultén has become something of an Instagram sensation with his range of exquisite handcrafted musical and video game-inspired designs. Some of these are built to house existing synthesisers, while others, like the VOC-25, are entirely novel designs.

Constituting 25 sets of toy plastic teeth and a keyboard controller, the VOC-25 is, in Hultén’s words, a “conceptual vocal synthesiser”, which uses RAW vocal audio samples to create a personal voice bank. Each of its Axoloti board’s 25 solenoids is connected to a different set of hinged teeth, which chatters eerily when opening to ‘sing’. It even boasts onboard effects and a built-in speaker.

A design that would be right at home in the lair of a 1970s Bond villain, the Radiotone is a synthesiser that uses genuine X-rays to generate its sound. Built by Italian artist and sound designer Giorgio Sancristoforo, the instrument is divided into four sections: high voltage generation, X-ray generation, X-ray detection and sound synthesis.

In those sections’ respective order, the Radiotone uses a Wimshurst electrostatic generator to create the necessary voltage, whose terminals are then connected to a Crookes’ partial vacuum tube (in which streams of electrons known as cathode rays were discovered). A German military Geiger counter dating from the Cold War era detects the resultant X-rays from the Crookes’ tube, emitting a click with every X-ray photon detected. This is then fed into a Bela board programmed with the Pure Data musical language.

“Because there is a very high electric potential between the cathode and the anode, the electrons in the tube are accelerated to 190.000Km/sec (0.63 c the speed of light),” says Sancristoforo. “You may in fact think of a Wimshurst Machine with a Crookes’ tube as a hand-cranked nuclear accelerator!” The Radiotone, thankfully, is one-of-a-kind.