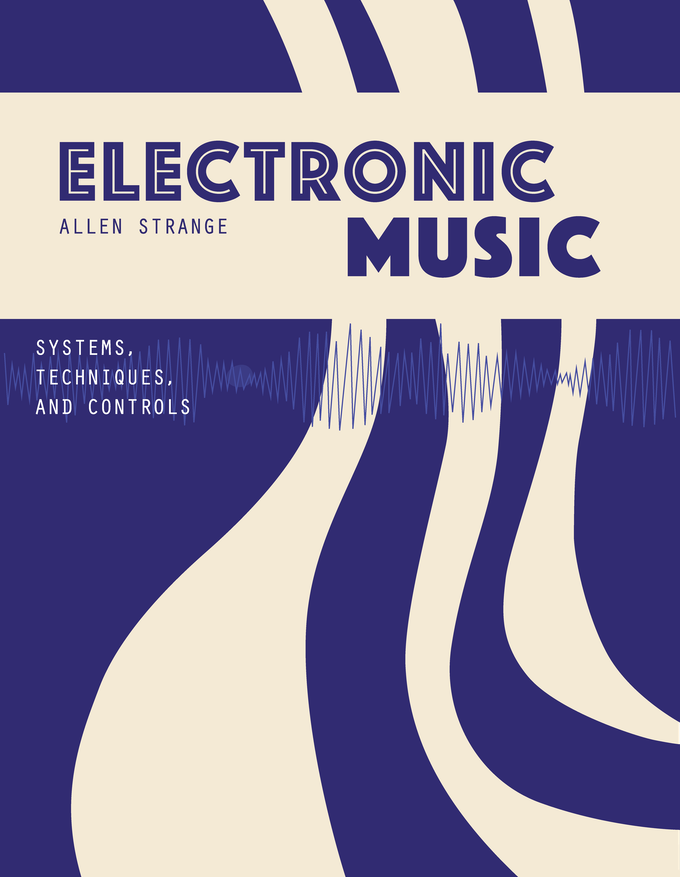 I am the happy owner of the original book by Allen Strange ‘Electronic music: system, techniques and controls’. It seems there is quite some demand for this book as I’ve found there is currently running a kickstarter project for re-issuing this book.

This is the story (go to Kickstarter here to read it all and maybe fund this project).

Hello fans of Allen Strange and electronic music: In June 2018, I was looking to buy a copy of Allen Strange’s Electronic Music: System, Techniques and Controls, at a time when I was getting back into electronics and electronic music  after an almost 30-year hiatus. I had vague recollections of a copy in the Electronic Music Studio at York University, where I made my first explorations into sound synthesis. The spine was gone and it was mostly a pile of papers stuffed into a folder. Finding that the only copies available were either poorly scanned PDFs, and used copies for sale online for hundreds of dollars, I was disheartened, to say the least. But I had a thought: what about finding the copyright holder and getting permission to reprint a few copies? It couldn’t be that hard, right? I work at a university with lots of resources, so I should be able to figure out how to do it. AND, that way I’d be able to contribute something to the electronic music communities that I’d started to join, such as modwiggler.com, modulargrid.net, and other online forums, and who had been so welcoming, sharing all their collective knowledge and wisdom. These were places where I had heard about Allen Strange’s Electronic Music: System, Techniques and Controls, in the first place.

I started a thread on Modwiggler to gauge interest. The interest was overwhelming, and motivating. After tracking down the original publisher, it took time to find out who currently owns the copyright. With the endless help and advice of librarians Ann Ludbrook and Sally Wilson at my school who specialize in e-publishing and copyright, we got to work. One of them tracked down Allen’s partner Pat and helped ensure that the family once again held title to the work, and Pat agreed to let us give this whole Kickstarter a shot, and sent us her copy of  Electronic Music: System, Techniques and Controls to disassemble and scan. Working with library staff and my research assistant Heidi Chan, we worked to get the book digitized, and ready for reproduction. One of the biggest challenges was to replace all the images of modules. That work fell to Heidi, who scoured the internet for people who still owned the original modules and synths used in the book, getting them to take new photographs for us to use. In some cases, the original designers of some of the modules no longer had them, but they helped us track down modules and acquire new images. With Pat’s help, we have added a new introduction by Stephen C. Ruppenthal, as well as a few pages of testimonials from people who learned from and were inspired by Electronic Music: System, Techniques and Controls, from Suzanne Ciani and Todd Barton, to Dave Smith, Dave Rossum, Serge Tcherepnin, Dieter Doepfer and Tony Rolando. The book has a new cover, compliments of Allen and Pat’s daughter Erin Strange, who did a wonderful job of creating a new design that carries the spirit of the original 1972 cover into this new edition. The text of book is faithful to the second edition of  Allen Strange’s Electronic Music: System, Techniques and Controls, published in 1983 by Wm. C. Brown Company.

Republishing Allen Strange’s Electronic Music: System, Techniques and Controls, has been a four-year project since its inception. The goal, from the beginning, has been to bring this important work back into the hands of fans of the original, students and teachers of the history of electronic music, musicians and electronic music practitioners, and designers of electronic music systems. We have permission to make Allen’s work available in print and electronic form from Pat Strange who holds the copyright, and Pat has been actively guiding our efforts through much of the project. At present, Allen Strange’s Electronic Music: System, Techniques and Controls, will only be available through this Kickstarter.

In Pat’s own words (from the preface): “Since it’s first edition in 1972, Electronic Music: Systems, Techniques and Controls has been acknowledged as the definitive text on modular synthesis. In today’s musical community analogue techniques have made a resurgence among many musicians and composers. The idea of a republication has been in the works for many years and the timing of doing it now just made sense. I am very grateful to Jason Nolan, Ann Ludbrook and the team at Toronto Metropolitan University who saw the importance of this endeavor as well as taking on the task of bring this book back to life. I am so appreciative of their attention to preserving the quality of the book and respecting its content. I know that this project would have meant a lot to Allen, specifically in knowing that his techniques and teachings are continuing to influence the future of electronic music.”

This is a non-profit project. Costs involved are royalties, production, logistics and shipping costs. Any residual funds will be donated to community music initiatives focusing on electronic music and electronic music learning. At present two organizations have agreed to receive funds, but we will identify more (in Europe next) depending on the amount of residual funds. These organizations are the Canadian Accessible Musical Instrument Networkand the Willie Mae Rock Camp.

Finally, I would like to thank Walker Farrell for the wonderful Kickstarter video. Thank you to all supporters for being part of this project. Jason Nolan