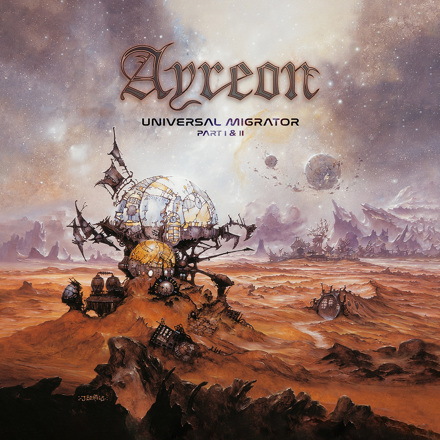 Ayreon, the global rock sensation from a tiny village in Brabant, has announced a new concert series after years of absence. The world-famous music spectacle will return to Tilburg in September 2023 for three rare live performances, called Live Beneath the Waves. But while his fans are cheering in the curtains, the mastermind from Brabant behind Ayreon is mostly overwhelmed by the tension.

A video on Facebook. Dark images from pop stage 013, with ominous, quasi Jaws-like music. A single man and a dog. The dates September 15, 16 and 17, 2023 and a thumbs up. That’s it. But Arjen Lucassen from Oudemolen didn’t need more than those 17 seconds to get his yearning fans foaming at the computer to book airline tickets and hotel rooms.
Because his fans, from really all corners of the world, had to wait four years for it. Out of necessity, according to Lucassen. “The concerts had a two-year cycle. It started in 2015 with the theater production, in 2017 we did Ayreon Universe, in 2019 the Electric Castle shows followed and in 2021 we had booked shows again in 013, but it soon became clear that that could not take place because of corona. If you depend on so many fans from abroad, we didn’t dare this year either. All those costs. Everything is getting more expensive.” Nevertheless, ‘Ayreon 013 2023’ did receive the green light. “It’s exciting and also a little scary.”

Lucassen wants to unpack. “This will be the biggest concert to date, with a 10-piece band and about 20 vocalists. What fans can expect? A show from 2.5 to 3 hours. Of course you want to spoil people who come from this far.”

“We perform the entire album ‘01011001’ and play some extra surprises in the encore. An Ayreon best-of? I don’t think so, actually. I think it’s more fun to play songs I haven’t done yet. That’s more exciting.”

“When I pick up a guitar on stage, the nerves just don’t make a note come out.”
It is not the first and certainly not the last time that he utters the words ‘scary’ and ‘exciting’. It draws the musician. For a world-renowned multi-instrumentalist with a wealth of experience, Lucassen is anything but a classic rock star. Not a man who remodels a hotel room and hunts skirts, stiff from drink and drugs. At 62, he still has just as much stage fright as in his young, wild years. “Terrible,” he laughs. “Always had it. If it’s not a routine, I just can’t play with the nerves. I much prefer being in the studio creating things. That’s why I started with Ayreon and sit not in a band either. I haven’t rehearsed in 30 years. When I pick up a guitar on stage, it just doesn’t come out.” Chuckling: “All I do is sing. And I can’t really sing at all.”

“Again: going to a show is a real hell for me, but after a show I go crazy with the band and fans. I just have to hold on to that feeling.”

Tickets for Live Beneath the Waves go on sale on October 27. A ticket costs about 70 euros. There is room for a total of 9,000 visitors over the three evenings. …. It seems that all tickets have been sold out.