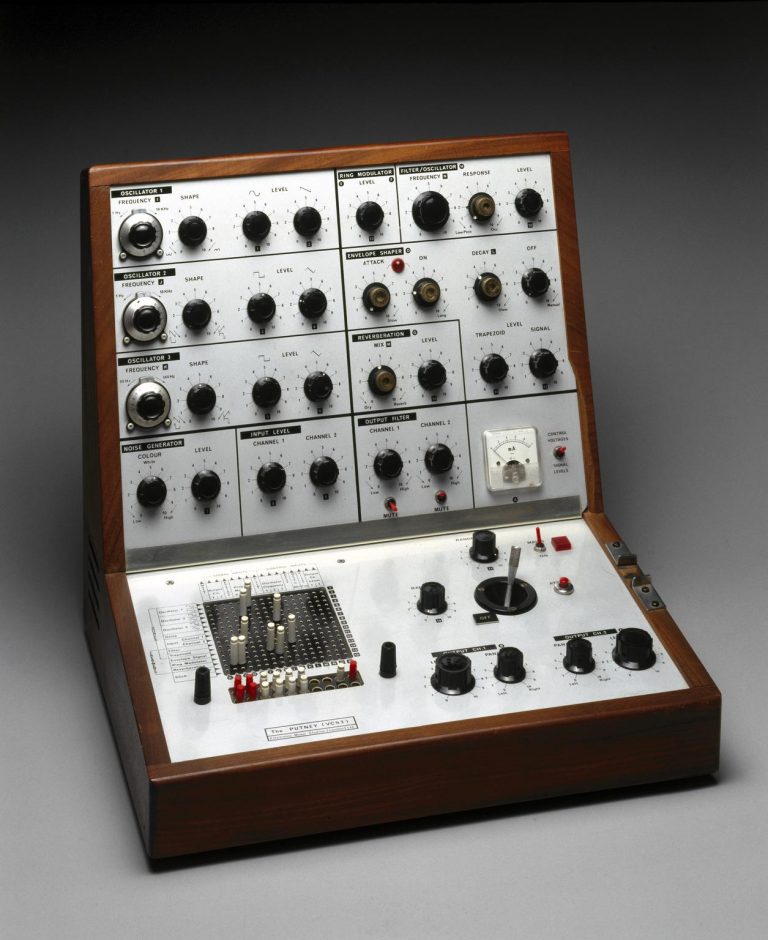 The Radiophonic Workshop officially opened for business on 1 April 1958 from Room 13 at the BBC’s Maida Vale Studios. It was set up to provide theme tunes, incidental music and effects for a wide range of BBC programmes, and it did so by manipulating electronic sounds as well as using a wide array of physical objects, some of which are displayed here. Although the workshop is now closed, many of the instruments and equipment can be found in the British Science Museum or here.

The Workshop’s best known creation is the menacing and other-worldly Doctor Who theme, which is justly celebrated as an innovative and iconic piece of electronic music.

However, the output of the unit included work as varied as the themes for The Living Planet, PM, Blake’s 7 and schools’ programmes such as Look and Read, plus comedy effects for The Goon Show.

The Radiophonic Workshop created an innovative aesthetic that was hugely influential to musicians and other creative artists worldwide. Its powerful and continuing legacy only seems to grow in influence with the years.

The pioneering work was begun by Desmond Briscoe and Daphne Oram for BBC Drama, producing new sounds by the manipulation of tape and test oscillators. Then it very quickly became a focus for other musical pioneers including Dick Mills, Delia Derbyshire, Brian Hodgson, Paddy Kingsland, Peter Howell, John Baker and Elizabeth Parker.

Over the years they used found sounds, synthesisers and eventually samplers to make their unique creations. Wrongly, the BBC persisted in seeing them principally as ‘technicians’, rather than the sound artists and technological experimenters they were.

For young viewers of early Dr. Who, the most famous track created by The Radiophonic Workshop will always be inextricably linked with memories of peeking out at Cybermen from behind their sofa. The pulsing rhythms of Delia Derbyshire’s theme tune went on to represent the beginnings of The Workshop’s unique form of early electronica. This pioneering music studio had been set up by a group of BBC employees as demand had grown for innovative synthetic music and sounds for radio and television. Through developing these sounds The Workshop would go on to inspire musicians from across the world and create a new genre of synthetic soundscapes.

Although the Dr. Who theme tune is the best known piece to emerge from The Radiophonic Workshop, the studio produced an enormous amount of incidental music, sound effects and jingles that sound-tracked BBC TV and Radio from the late 1950’s to the 1990’s.

Now The Radiophonic Workshop are launching their first studio album in 32 years – Burials in Several Earths. The Science Museum recently opened Mathematics: The Winton Gallery and The Workshop’s album launch presented the perfect opportunity to invite them to the Science Museum to explore the mathematical side of electronic music.

The permanent collection holds some fantastic gems from the early days of electronic music in Britain. In 2010 the Museum acquired the Oramics machine, invented by one of The Radiophonic Workshop founders, Daphne Oram.