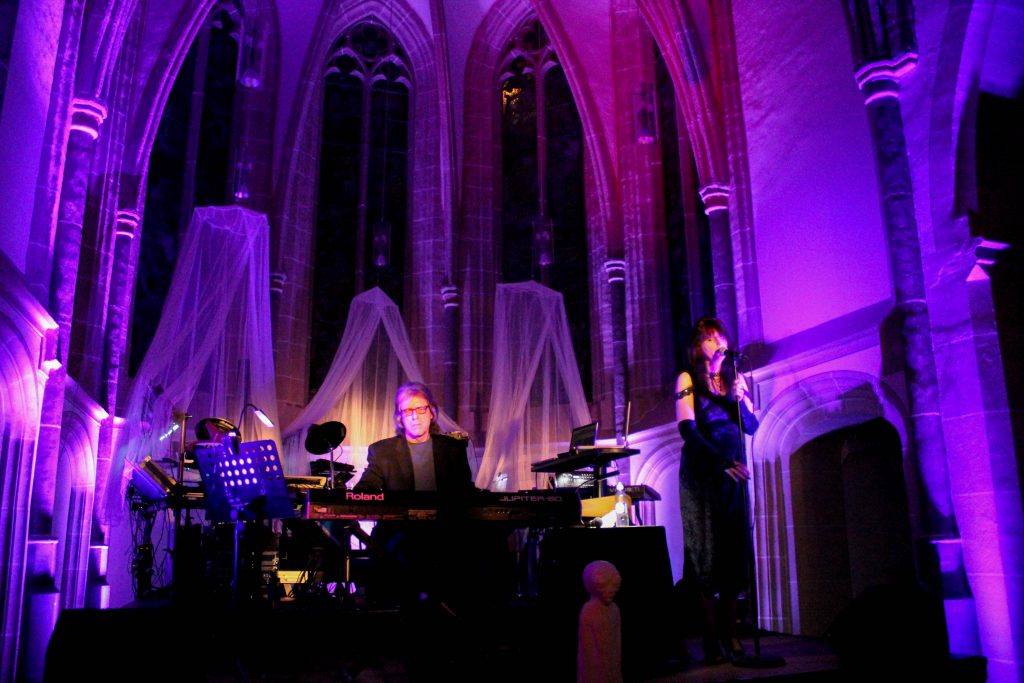 Update 3: David Wright forwarded a kind review of the Beyond the Airwaves concert, which we reproduce gladly: “Since Friday 29 April 2022, and thanks to the streaming on Youtube of the wonderful concert given by Carys and David, “Beyond The Airwaves 1”, it is now done. And I must say that I was not disappointed ! What is beautiful and moving about the great masters of electronic music is the unique atmosphere they create almost instantly. In a few minutes, the Rubycon is crossed. And the dreamy, hypnotic and rhythmic atmosphere that emerges from David’s intimate laboratory will not loosen its grip.There is a David Wright “touch”, an inimitable way of bringing the music, step by step, tier by tier, to a rare level of emotion. The care given to each sound, each detail (meticulous dosage of effects, sometimes acrobatic live !), this so singular way of “digging” the sound until entering the very heart of the material being worked on, the capacity to vary almost indefinitely the same rhythmic or melodic motif, all this gives rise to a jubilation and a feeling of obviousness that is good for the heart and the mind. Above all, there is David’s gift for the melodic element, the “singing” aspect of his music, which seems to draw both from the old, immemorial archaic fund and from an almost organic relationship with the machines, those marvellous synthesizers that he makes sing like nobody else. During this concert, a large part of David’s rich career is covered, alone or with the contribution of Carys’ enveloping voice. If the show starts with an unreleased track, (a harbinger of surprises to come ? We hope so !), the artist will then sweep through his catalogue in a dense and subtle patchwork. We’ll go from ‘Nomad’, taken from ‘Deeper’, to ‘Tales From The East’, an album from 1998, and to ‘Desert Theme’, taken from the English musician’s latest opus, the extraordinary ‘The Lost Colony’. When Carys’ voice joins him in the last part, it’s a great thrill ! The Sufflok-based singer’s incantatory melismas blend with David’s cleverly woven heady loops, and one can’t help but think of that other wonderful duo formed by Klaus Schulze and Lisa Gerrard (Klaus, to whom a visibly moved David Wright will pay a beautiful tribute at the beginning of the concert), although the music offered here is very different. A song of the soul, vibrant and caressing, which transforms the last minutes of the concert into a poignant lamento “for the silences to come”… Thanks to both of them for this wonderful concert, and look forward to the next meeting on 29 July !“

Update 2: David Wright uploaded some nice pictures of the Beyond the Airwaves concert some days ago. Please note that the pictures are (c) David Massey.

Beyond the Airwaves will be an evening of electronic music with David Wright & Carys plus guests.

“After a plague-enforced absence from the live scene, David Wright returns with regular guest Carys in the first of a series of live concerts that will be simultaneously streamed worldwide on Youtube. The evening will commence with a short opening set featuring Carys performing her unique style of folk rock music. Then David Wright will perform brand new and improvised ambient electronic music composed especially for the event. David will be joined later in the evening by Carys to perform old and new music from their collaborative works.” You can find more about this collaboration on David Wright’s website

In case of any streaming issues on the night, (or for those unable to attend or watch the live Friday show), the concert will be uploaded in its entirety for viewing on Youtube on Saturday 30th April at 20:00 hours, when we will both be available to chat with fans and friends.

Tickets to attend the event in person are available through AD Music.

David adds: “After several rehearsals we have concluded that the Livestream/online concert will now be online from Saturday 30th April, when we will both be available to chat with fans and friends. It will be free to watch but donations are appreciated. We understand some of you intending to watch online may be a little disappointed to lose the “live” element, but we feel offering a full concert without fear of buffering or reduced stream quality will more than make up for this.“