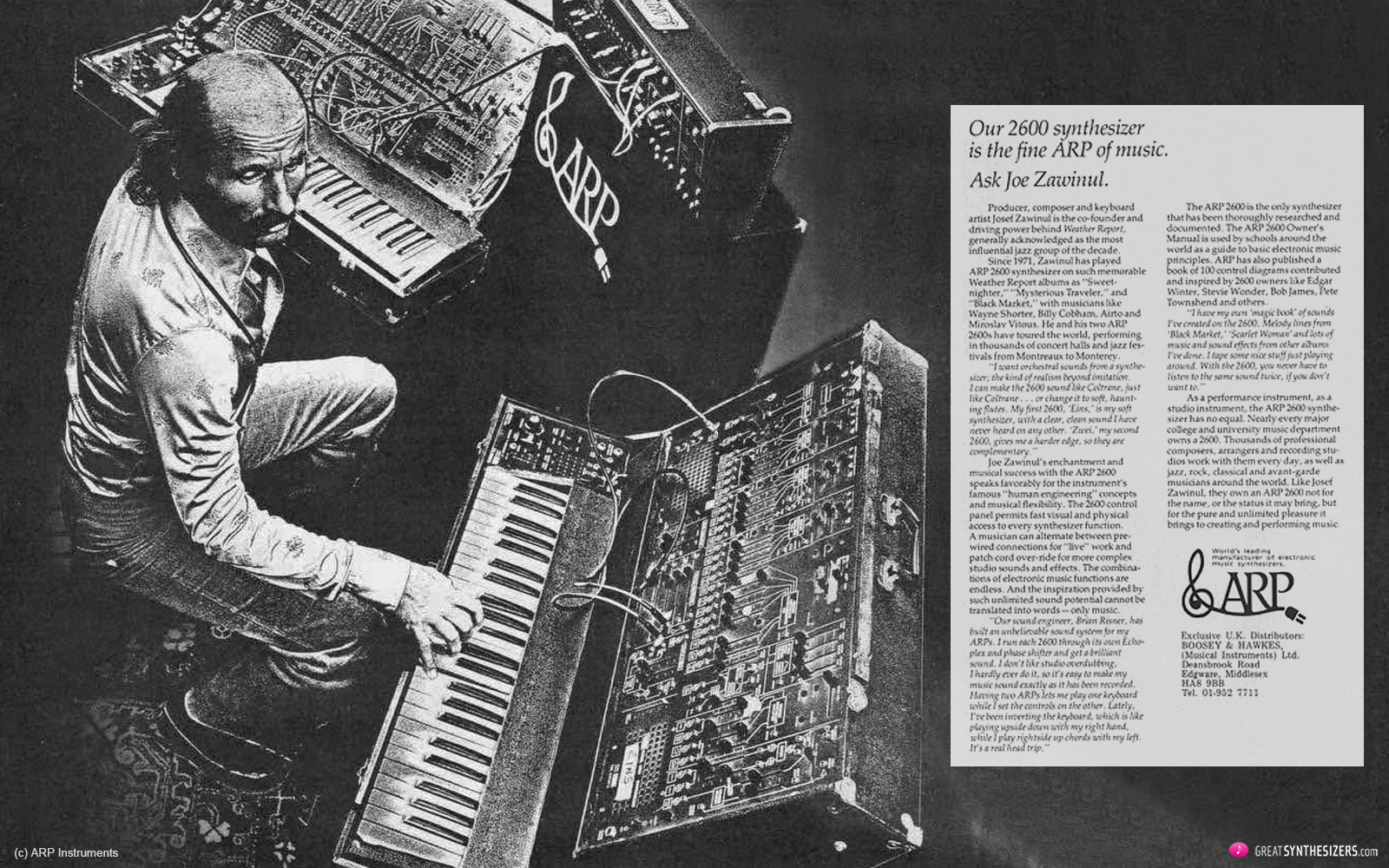 In Keyboards US magazine, there has been a long range of articles covering vintage synthesizers. Not only the series created by Mark Vail, but other authors too. Below is a 2-page article on the ARP 2600, written by Bob Moog. Bob not only discusses the role of the ARP 2600, but also some interesting user features and …. two famous sounds.

Below the scans you can find the OCR text.

THE ARP INSTRUMENT COMPANY introduced its line of high-tech analog modular synthesizers, the 2500 series, in 1970. These instruments featured matrix-switch patching (no “patch-cord jungle”) and stable oscillators. ARP’s founder, Alan R. Pearlman, recognized the importance of teaching musicians how to use the technology, so he designed a new instrument with a fixed selection of basic synthesizer functions. This instrument, dubbed the Model 2600, was an integrated system with the signal generating and processing functions in one box and the keyboard in another. The functionality was borrowed from the original ARP modules, but instead of using matrix switches (which were expensive and bulky) for patching , Pearlman devised a system of factory-installed “normal” connections between the modules. These connections could be added to or replaced by patch cords. Thus, a beginning user could work the system relatively simply. When the user desired to develop more complex sounds, patch cords could be added as needed. Pearlman believed that schools with small or medium-sized music departments were the main market for this new instrument. To further enhance the 2600’s educational value, Pearlman put graphics on the console’s front panel so that the signal paths were easy to follow, and used sliders and slide switches so that the control and switch settings were easy to see. The first production run had blue panels, painted sheet-metal cases, and polished wood handles. “That’s not what I wanted,” Pearlman recalls. “I wanted the instrument to be housed in a rugged case that would travel safely. But those were the days when nobody would listen to you if you were over 30, so the young designer had his way.” Musicians and retailers, however, quickly shot down the “Blue Marvin” or “Blue Meanie” design in favor of the vinyl-covered luggage-style case with the dark grey panel that remained in production from 1971 to 1981. Into The Hands Of Musicians. The ARP marketing people quickly determined that the key to promoting the 2600 was to show musicians and retailers what could be done·with the instrument. David Friend and Roger Powell toured the United States, putting on demos and talking to musicians and dealers. synthesizer. Powell (who left ARP to become a synthesist with Todd Rundgren and currently works for Waveframe) recalls, “David and I traveled all over the place in a red Chevy van. We tried to sell the 2600s in hi-fi outlets as well as music stores. We got thrown out of most of them. For most musicians of that time, the instrument was hard to use. On top of that, it was monophonic. The turning point was when [music retail store) Sam Ash decided to take on the 2600, late in 1971 . They were really forwardlooking. They gave us credibility among retailers, and exposed our instruments to all the musicians in New York.”

Edgar Winter was the first high-profile musician to pick up on the 2600. He had the keyboard equipped with a long extension cord, which enabled him to wear the keyboard around his neck like a guitar. Pete Townshend, who also had a 2500 modular system, was another early 2600 user. Stevie Wonder had the control panel of his 2600 labelled in Braille. Many talented musicians took on the 2600 and, with sustained determination, mastered the new technology. Powell remembers Joe Zawinul’s early experience. “Joe came up to Boston to play at the Jazz Workshop. I met him and showed him the 2600. It took him a little time to pick up on some of its features. For instance, the 2600 lets you route the output either through the VCA or directly from the VCF. If the output came from the VCF, the sound would always be on. After Joe had his instrument for a week or so, he called and said, ‘Hey man, the sound is fantastic. Now tell me, how do you make it stop?’ But he kept at it, and became one of the 2600’s leading musical innovators. Eventually he had two 2600s, one of which was controlled by ARP’s model 1601 16-step analog sequencer.” Zawinul also took advantage of the function that allows the 2600’s keyboard voltage to be inverted, which results in pitches that are mirror images of those on a normally tuned keyboard. He would then simultaneously play the identical fingering on two keyboards, one of which used the reversed tuning. The effect was far from conventional. From Monophonic To Two-Voice. A couple of years after the 2600 was introduced, Tom Oberheim came out with a kit that would convert the 2600 into a twovoice instrument. The kit worked by converting the keyboard so that it would produce both high-note and low-note voltages. Since the instrument had three oscillators, you could use one or two of the oscillators for the high note, and another oscillator or two for the low note. In 1975, ARP incorporated Oberheim’s idea into its standard production models. The keyboard circuitry was redesigned to include not only the two-voice mode, but also delayed vibrato, interval latch, single and multiple trigger, and improved pitch-bend capability. Mark Minter-Smith, ARP’s musica) tester for six years (and now an instructor at the Berklee College of Music) points out, “Just the addition odelayed vibrato freed up a VCO, the VCA, and an envelope generator.” The new keyboard had the model number 3620, whereas the monophonic keyboard model numbers were 3601 and 3604. (The console model numb was always 2600.) The 2600 color scheme remained black, gray, and white until 1978, when the look of the entire ARP product line was changed. After 1978, the panel graphics were white and orange, and the panel itself became a darker gray. The Service Situation. The critical circuits of the early 2600s were cast in epoxy blocks that are almost impossible to repair. Around 1975, ARP switched to potting the circuits with silicone rubber, then topping them with epoxy, which is less difficult to repair. A few years later they stopped potting altogether, resulting in circuits that can be easily fixed. two-voice counterpoint.

When ARP went out of business in 1981, Music Dealer Service in Chicago (phone: 312- 282-8171) bought a large quantity of ARP parts at the bankruptcy auction. Since then, MOS has been the main source of replacement parts, and they have repaired many 2600s as well as other ARP instruments. MOS still provides 2600 service and parts, although they report that many parts, including potted circuit blocks, are no longer available. Although no one is advertising MIDI 2600s, the instrument may be integrated into your system using a stock MIDI-to-CV converter such as the Roland MPU- 101. This is easy because it is a trivial matter to disconnect the keyboard. Another bonus is that the 2600’s oscillators are more stable than other early-model synths, such as the Minimoog, so you needn’t worry too much about the instrument staying in tune. Wrapping Up. As Roger Powell says, “The 2600’s main assets are the same things that made it hard to sell initially. The 2600 boiled down virtually all analog synthesis capabilities into a single box. You could experiment with it or use it pre-patched. It was a magic mix-definitely enough stuff to use musically. On top of that, it stayed in tune and was reasonably robust and roadworthy. “As analog synths went, it was easy to use. You could easily see and recognize panel setting patterns— even in the darkness of the stage. As one wellknown 2600 user said many years ago, ‘It’s the only synth that I can operate while I’m drunk.”‘

These two patches only begin to illustrate the wealth of sonic resources that are available in an analog modular system of this size. The second patch, used by Edgar Winter in his song “F rankenstei n, 11 i II ustrates two important features of the ARP 2600, as wel I as of other instruments with related design philosophies. First, real-time access to all of the front panel controls is an important musical resource. And second, completely new, unconventional sound material can be produced with only a few functions, controls, and patch connections. These patches are shown as block diagrams so that you can better understand the principles of signal routing in a modular system.

The sample/hold module samples a noise (random) waveform, producing voltage steps of differing heights. These steps control the frequency of the VCO. The higher the step, the faster the VCO. The VCO square wave output is then used to clock the sample/hold. The result is a waveform at the output of the sample/hold that consists of steps of random height and width, and another waveform at the output of the VCO that consists of steps of uniform height and random width. By varying the noise level, sample/hold level, and VCO frequency, you can produce a wide range of crashing and breaking sounds, which can then be fed through a VCF and VCA. Patch 2: Edgar Winter’s “Frankenstein.” The sine wave from the VCO is used to frequency- modulate the VCF, which is set to oscillate. The VCF output is a raunchy FM sound. The degree of raunchiness is controlled by attenuator #1. Two envelope generators are used. The ADSR envelope generator produces a short, percussive envelope, while the AR produces a sustained envelope. Both envelope generators are triggered by a clock that produces a trigger fourto five time per second. The VCF is swept by the ADSR; the sweep of the depth is controlled by attenuator #2. The VCA is controlled by both the ADSR and the AR. The level of the audio output is controlled by attenuator #3. To produce the complete sound: (1) Turn up attenuator #3 so that the sound becomes audible. (2) Change the filter frequency. (3) Turn down attenuator #1 to reduce the amount of FM. (4) )erk attenuator #2 up and down in time with the beat of the music.

The sine wavefrom the VCO is used to frequency-modulate the VCF, which is setto oscillate. The VCF output is araunchy FM sound. The degree ofraunchiness is controlled by attenuator#1.Two envelope generators areused. The ADSR envelope generatorproduces a short, percussiveenvelope, while the AR producesa sustained envelope. Both envelopegenerators are triggered by aclock that produces a trigger fourPatch 1. Breaking Glassto five time per second. The VCFis swept by the ADSR; the sweepof the depth is controlled by attenuator#2. The VCA is controlled byboth the ADSR and the AR. Thelevel of the audio output is controlledby attenuator #3.To produce the completesound: (1) Turn up attenuator #3 sothat the sound becomes audible.(2) Change the filter frequency. (3)Turn down attenuator #1 to reducethe amount of FM. (4) )erk attenuator#2 up and down in time withthe beat of the music.