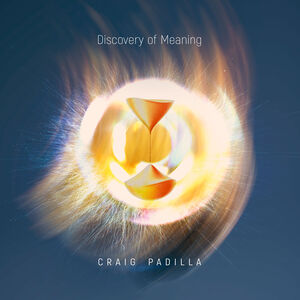 Veteran electronic composer-experimenter Craig Padilla’s Discovery of Meaning is a celebration of the endless lessons brought by living in the present, and he invites the listener into the intimacy of a single instant. A personal and contemplative record, Discovery of Meaning paints in sounds from across Padilla’s career. Elements of electronica, trance, new age, drone, ambient, and cosmic space music blend into something unique and spellbinding, though Padilla’s environment is also a significant influence. He draws from modular synth explorations in Oregon, serene naturescapes at his Cottonwood, California home and the hovering anxieties of the 2020 lockdown. Padilla first began Discovery of Meaning in Oregon while working at a modular synthesizer shop and learning more about modular techniques—but completed it at his home in California in the middle of the 2020 lockdown.

This study in Oregon informed his compositions: the MST/Division 6 Modular Synth and Mattson Mini Modular Synth are featured on almost every track, sometimes as rhythmic anchor and sometimes as hypnotic melody. On opener “Perception Stream,” a modular bassline swings like a stellar orbit around a trance-like beat. Their interplay is subtle but cyclical, rapturous. Penultimate track “Cottonwood” features natural samples from Padilla’s backyard; sounds of wind and wind chimes, forests and frogs simmer under cosmic pulses and gentle modular striations.

In mid 2020, Star’s End Radio Host and fellow electronic artist, Chuck Van Zyl commissioned Padilla for a song about what artists were doing to stay sane and healthy during quarantine. This song, “Continuum,” features spoken word elements about time (in German: zeit) featuring a German foreign exchange student Paula, who was studying music with Padilla’s daughters, Harmonee and Melodee, recorded just prior to Paula’s return flight to Germany. The track also features wordless vocals from Harmonee and Melodee, which entwine over a cinematic swell, adding organic warmth to a cold, electronic landscape punctuated by a propulsive modular loop that gallops through oscillations of texture and voice. These elements rise and recede around each other like crashing waves—at once intimate and unfathomably vast. Van Zyl called “Continuum”: “something rare… a new sound, a new atmosphere,” adding, “I almost do not know how to absorb this new music, as it reaches to such a personal space.”