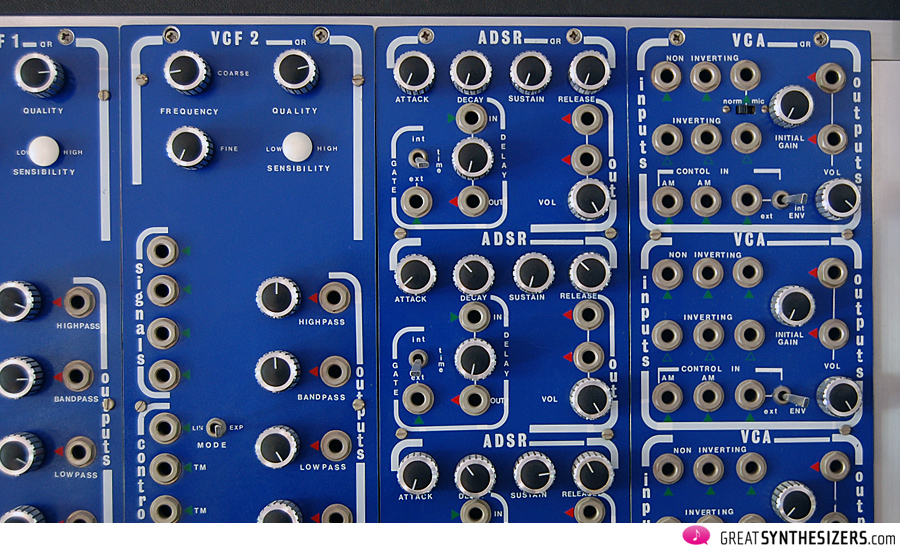 In the pile of vintage (synthesizer) brochures, I found one about the EEF synthesizer. Well ‘brochure’ is not the best description: it is a black/white copied A4 paper describing a modular synthesizer system, designed and built by E. Feremans. I was not aware of it’s existence and also could not find any info in the A-Z of analogue Synthesizer from Peter Forrest.

This is the brochure we have in our archives – it is in Dutch, but below the images we have included a translated version.

The description (scanned and ocr’d as good as possible, translated by Google) says:

Two years of sweat and blood preceded the design of the EEF-synthi, the first professional synthesizer from our own soil. The system is completely modular (different parts, independent of each other, each with a separate function), and is therefore infinitely expandable (on the other hand, this also means that you can already start with a few modules.) The synthesizer can be used on all possible ways to be controlled: classical, with keyboard and/or sequencer; with computer; as a guitar synthesizer and as a processor of any acoustic instrument (even voice). Despite the high quality and flexibility of the system, the synthesizer still remains! 10 times cheaper than comparable commercially available systems. In the picture it looks anything but cheap!

HOW IS THIS POSSIBLE??? Firstly, because we (EVERY MUSIC) believe that everyone (including the doppers) should be able to build up a complete and professional sound studio (without buying themselves bankrupt), provided that he, and that is, secondly, the little effort to build his synthesizer yourself, (The synthi is supplied in kit form – although it can be delivered completely finished which is a little more expensive, tiens.,,,) Building it yourself does NOT require ANY KNOWLEDGE OF ELEKTRONIKA and turns out fine supervised introductory evenings, there is an extensive construction manual and the modules are adjusted free of charge by our engineer. There are also courses in playing the synthesizer and courses and workshops in modern music theory (eg, acoustic-electronic music). Atelier (computer drawings, etc.),

The kits contain printed circuit boards and electronic components. Potentiometers, switches and front panels are not included. If you would like to come and view and play the synthesizer, please send a note to: E. E. Feremans, Pater Verbiststraat 6, 2610 Wilrijk, Belgium.

On the internet little more info can be found. Such as on greatsynthesizers.com, on which you can find pictures and some sound examples. Obviously this system contains more and different modules then presented in the brochure. Also on matrixsynth.com little info was available, in 2006 someone wrote:

This so-called EEF 16-4 sequencer is the name of this particular sequencer, built by a guy named Eric. E. Feremans (hence the name), who was the founder of a non-profit organisation in Antwerp (Be) called ELK-Muziek. In ELK Muziek you could learn about electronic music synthesis, and also how to build your own modular synth. This was late-70ties, early 80-ties. The 16-4 sequencer is part of a modular system, and I seriously doubt there were built more than two or maybe four (I was a very active member of that group, and even used this sequencer myself). The Klinik still exists, and is still very popular in the industrial music scene. Marc Verhaegen (its main member) may have borrowed this sequencer on a few occasions.

Further investigation lead us to Eric Feremans, known as a Belgian composer and synthpioneer. It seems that he composed music, such as for ‘The Antwerp killer’ movie. I found this on forcedexposure.com:

One of the rarest vinyl horror soundtracks of all time, 1983’s The Antwerp Killer consists of remarkable homemade electronic experiments created by a wunderkind synth designer for a smart-talking teenage movie maverick. Combining self-propelled punk attitude and uninhibited confidence, the hyper-proactive work of these DIY prodigies pinpoints an important era when youthful ambition and creative technology met. By the age of 16 Eric Feremanshad started building modulators and eventually his first proto synthesizer; he later played a concert with Belgian electronica pioneer Karel Goeyvaerts. Feremans founded a school for building and playing synthesizers, the EEF, where volunteers ended up producing about 20 or 30 build-your-own packages. After appearing as a guest on a national television show, the demand for his courses exploded, and Feremans began lecturing internationally, even attracting the king of the Amsterdam mafia, who was driven down from Amsterdam with two body guards in his Rolls-Royce every week. One day Feremans got a visit from a Luc Veldeman, a 16-year-old with a manner of speech way beyond his age and larger-than-life projects. Veldeman was making Antwerp’s first crime movie, The Antwerp Killer. He had seen Feremans play live and he wanted some of his music to be used as the score, and to press as an album to promote the film. Feremans gave him one of the rare recordings he had made with the synthesizer, a session he had just recorded upon installing his new studio; a session, according to Feremans, that was the result of the pure joy he experienced at having such a wonderful machine in his studio and the bottle of vodka he downed during the session. Veldeman cut up that session and it turned it into the soundtrack of The Antwerp Killer. The press and the audience shared a general reaction to the film: bad acting, bad editing, bad script — cool soundtrack, though. Veldeman, who had rented the film equipment under a false identity and dumped it in a canal after shooting, was nowhere to be found, and his investors lost their money. A magnum opus by a true criminal and the synthesizer teacher of the Amsterdam mafia king, The Antwerp Killer remains a prime document of the broody Belgian ’80s and a heck of a soundtrack. This first-ever reissue was beautifully remastered with the full cooperation of Eric Feremans himself. Includes liner notes by Belgian archivist Gerd de Wilde.

At this moment we’re still trying to find more info. If you have any, please share it with us.