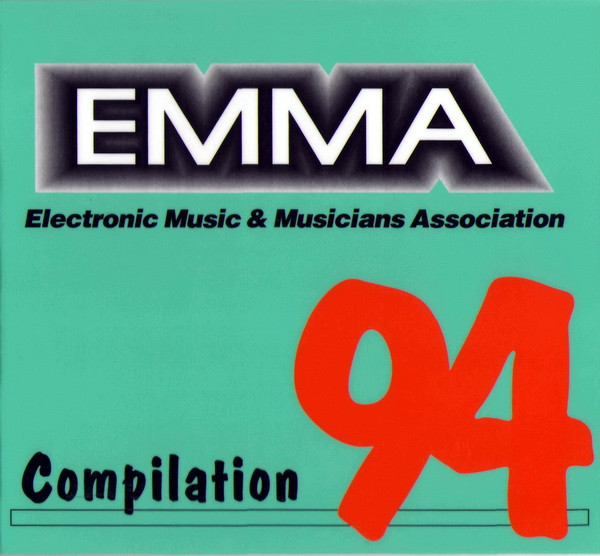 EMMA Electronic Music & Musicians Association. Emma was formed in 1994 by a team of fans and musicians who felt there needed to be an organisation to promote E. M. producing a regular newsletter, holding yearly festivals and generally spreading the word that this type of music was available.

1994 saw two festivals in Derby, England , the first showcasing the best UK acts inc, John Dyson, Andy Pickford, Ian Boddy and Mark Shreeve. The second saw a more international lineup inc. Jonn Serrie (USA) & TK (Germany), both were very successful events. In 1995 the venue was switched to Sheffield and again the show had an international flavour with the highlight of two of our most successful artists Ian Boddy & Andy Pickford headlining.

As with all organisations there were internal wranglings and one by one those members who formed this association left, and somehow the dream of getting EMMA more recognition died.

Sequences editorial staff who were part of the EMMA team from the beginning, decided to go alone and carry on the name. Hence two years later in 1997 the fourth EMMA festival took shape with Mind over Matter & Waveshape (Germany), ex Hawkwind player Harvey Bainbridge and many new UK acts. Although the show, musically, was successful, financially it was a disaster.

You can find more (historic) info about EMMA at the sequences magazine website.

Sound on Sound Magazine published this article about the EMMA festival in 1994, written by Graham Getty.

Is the Electronic Music scene, as personified by the likes of Tangerine Dream, Jarre, Vangelis and Kraftwerk, dead and buried? Or is it alive and well, and living in Derby? Graham Getty reports.

Names such as Boddy, Dyson, Pickford and Ward may not have the same ring as Tangerine Dream, Vangelis or Jarre, but in the current EM scene it is these artists’ music that people are talking about. Add Tranceport and Mark Shreeve to the bill and it amounts to the strongest line‑up ever seen at a UK event.

The venue for this gathering was Derby Assembly Rooms. Why Derby? Simply because it is BBC Radio Derby, in the form of DJ Ashley Franklin (otherwise known as the Patron Saint of Electronic Music), who has started to devote regular airplay to Electronic Music, and (unsurprisingly to EM devotees) people have started to take notice, as previously demonstrated by a clutch of sold‑out EM concerts in the Derby region. Combine this with the fact that Derby just happens to have a superb venue in the form of the Assembly Rooms, which is almost tailor‑made for an event like this, and even the unnavigable Derby one‑way road system starts to look an acceptable prospect.

Events such as this work because of a number of elements. The venue and line‑up are of primary importance, of course, but the presence of EM related trade stands is also a fundamental ingredient. Indeed some fans attend for these alone — just the thought of being able to buy EM over the counter is enough to draw devotees (and their cheque books) from all over the country. All the main EM retailers/distributors were present: C&D Compact Disc Services, Neu Harmony, Midas Records, Mike Lloyd Music — plus a wealth of synth related stalls such as Zenith Magazine, Voyager, Sequences, Space Rider, and some stalls from abroad. There was even a chance to twiddle with some knobs yourself, courtesy of the ever‑supportive Carlsbro music stores.

Doors opened at 11am on Saturday, March 12th, giving attendees well over an hour for an initial browse round the stalls before Tranceport took the stage. From the opening speech samples which proclaimed ‘All matter is merely energy condensed to a slow vibration…..’, it was clear that this was not going to be a ‘traditional’ EM set.

The Scottish trio of Bobby Gilles, Alan Martin and Stewart Robinson presented tracks from their forthcoming album Further, together with new material based on sci‑fi author David Wingrove’s Chung Kuo series of novels. Tranceport’s heavy, almost tribal, rhythms juxtaposed with regular sampled effects made for interesting and enjoyable listening. Combined with some deft sequencer work and expert lead lines, the set really personified EM’s current attempts to get to grips with the Ambient explosion.

Judging by the crowd’s enthusiastic reaction, many decided the band were on the right lines; however I’m sure some would have been left thinking ‘Now what the bloody hell was that all about?’ And here we have one of the great dilemmas of the EM scene today. Ambient left its traditional EM roots languishing in the doldrums and has successfully exploited a not insignificant niche, being hailed as a ground‑breaking genre in the process. EM artists trying to traverse the gap risk losing their traditional base to become part of a rapidly splintering scene, which may yet come full circle. Sit tight or go with it, that is the question.

There were no doubts about Paul Ward’s roots. If it’s synth music with more than a hint of prog rock you like, then look no further. Paul walked on stage, with fellow musician Shaun Michael D’Lear, looking like refugees from the American Civil War but from the opening notes it was easy to appreciate that you were in the company of a class act. Paul’s trademark MiniMoog solos seem to get better with each concert and D’Lear’s superb guitar work simply added to the equation. They delivered a pulsating 60‑minute set. Old and new material was on show, the new whetting the appetite for his forthcoming release The Fear Of Make Believe and the old underlining just what an excellent album For A Knave was. Two tracks were also aired from Paul’s Quiet Point days. ‘Scream In Darkness’ is always a crowd pleaser, with its scorching MiniMoog solos, but the real highlight for me was a performance of the classic ‘Taken To A Place’ with its wonderful, poignant melody. Even better is its promised inclusion on the new album.

Headlining the daytime event, and rounding off a trio of Surreal To Real acts, was the incomparable John Dyson and (an ever‑growing band of) Friends — Stephan Whitlan, Shaun Penton, Dino Zoferelli, the omnipresent Shaun Michael D’Lear, and for the latter part of the set Antony Thrasher. John showcased material from his new album Different Values and demonstrated that his ear for “a damn good tune” (as he puts it) is far from diminishing. ‘Osaka Hai’, from John’s Wavestar days, was also dusted off, and those colossal chords which close the track still sounded as fresh as ever.

John’s set was not without its problems though, especially on one or two of the newer numbers where poor monitoring and unfamiliarity combined to create “a few timing problems”. Also the smoke machines, which should have emphasised the excellent light show, succumbed to the Assembly Rooms’ enthusiastic air‑conditioning system, and ended up being as much use as a couple of wet Woodbines!

However, ever the showman, minor points such as these were dispelled by the now expected madcap moments — such as the ‘oven gloves’ pastiche of Mr Jarre’s famous Laser (or “lazy” as John puts it) Harp, performed incidentally over a candelabra, and a spaghetti western shoot‑out during ‘Rio Grande’.

‘Time Node’ was duly performed in anthemic fashion as the encore and the audience reaction which followed was proof, if any were needed, that 18 months away from live performance had not diminished John’s unique popularity.

A two‑hour break followed John Dyson’s set, allowing time for food and a further perusal of the stalls before the evening session got underway. Befittingly Ashley Franklin, whose ‘Soundscapes’ radio programme jointly sponsored the event with Sound On Sound, introduced the evening’s opening act — “the local lad made good” Andy Pickford. With his acclaimed debut CD Replicant only having been released six months earlier, Andy was a new proposition even to many EM devotees. However, after his seamless 45‑minute collage of simply stunning Electronic Music, there was a sense that one had witnessed ‘the start of something big’.

The easy option would have been to present a cocktail of tracks from Replicant, but never a man to rest on his laurels Andy served up a set of almost exclusively new tracks from the imminent Terraformer CD. Andy’s superb sequencer technique, combined with sensational melodies, produced such a quality sound that it was easy to believe he was making full use of the impressive arsenal of synths and modules which festooned the stage. However, the bulk of the equipment lay in wait for the next act — Andy’s only keyboards were a Korg T3 and Roland S10 placed in front of him (OK — with a little help from a Sony 55ES DAT). What he could do with equipment like that is anyone’s guess!

If you need someone to follow Andy Pickford’s pyrotechnics, then you could do a lot worse than Ian Boddy, accompanied by David Berkeley. Ian’s popularity seems to grow month by month, and judging by this performance so does his confidence.

It was an exemplary set which underlined Ian’s mastery of the sampling technology he employs, with classical themes combining perfectly with modern rhythms and pulsating sequences. Tracks such as ‘Supernova’ and ‘Space Cadet’ from The Uncertainty Principle shone as ever, but the material from his forthcoming album, The Deep, promises even greater heights. Ian remains among the leaders in the EM scene today and this performance, which many agreed was probably his best ever, will have done him no harm at all.

So who is this man Mark Shreeve? He’s not released an album for years (other than Library Music) and yet he can walk straight to the top of a bill littered with such pre‑stigious names. Within minutes of experiencing the Shreeve ‘Wall of Sound’, nobody was left in any doubt of his credentials. Drums like grenades, sequencers like howitzers and searing axe leads were served up track after track, some from his ironically titled new album Nocturne.

Flanked by fellow key‑boardists Julian Shreeve and James Goddard, and resplendent in leather biker gear, Mark Shreeve assaulted the EMMA audience with a ferocity never before witnessed. Everything seemed to click — the PA went into overdrive, the stroboscopic lights pulsed incessantly, and above all the beat went on! An encore of the ultimate ‘in yer face’ EM track ‘Assassin’ finished the set off in appropriate fashion, leaving the by now punch drunk crowd in no doubt about one thing: no‑one can shag a keyboard like Mark Shreeve!

So that was that. The 500+ audience staggered out (whether this was due to the strobe lights or the weight of CDs they had all bought, I’m not sure) into the cold Derby night, and as the dust settled many came to realise that they had witnessed a spectacle the likes of which may never be seen again… until September that is!