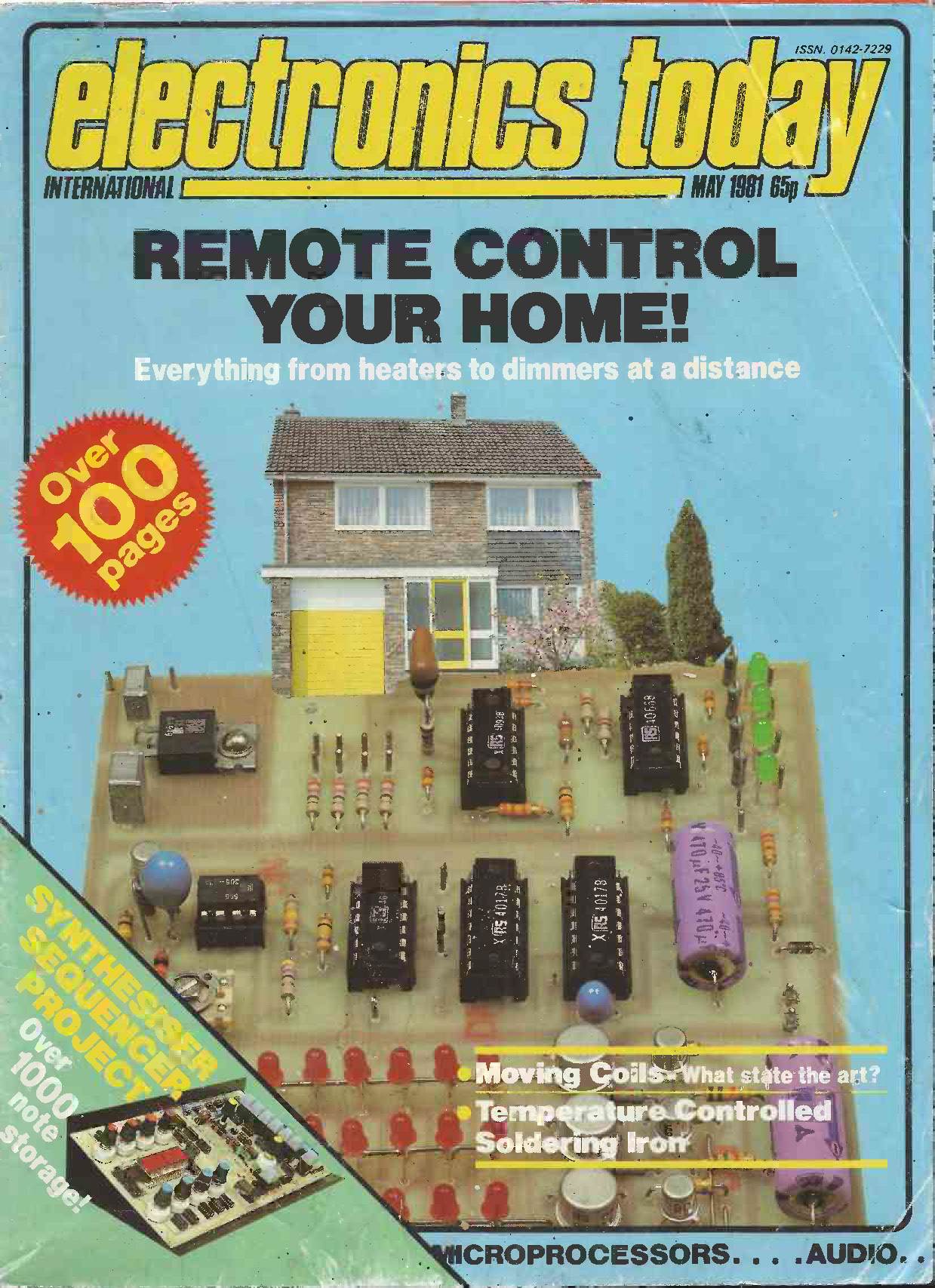 In the May 1985 issue this digital Synthesizer Sequencer DIY project was introduced. In the same issue this sequencer was offered as a kit by Powertran. This was quite a challenging project and we are looking for electronic musicians that built this sequencer, of have owned it (or still own it): please share pictures and/or sound demo’s with us.

We have included scans of the original article and the pdf of the full article. Also we have tried to OCR the article and the (English) text is included below the images. Please note that the (c) are with ETI Magazine and its authors. The pictures of the 1024 sequencer are kindly reproduced from matrixsynth.

OCR of the original article here.

Treat your syntht on this sequencer/composer and let it play sequences of up to 1024 notes. Design by Richard Becker of Powertran Electronics.

The 1024 composer is a machine which will repeatedly cause a synthesiser to play a pre–detem1ined series of notes either as short sequences or a large composition of 1024 notes, ie several minutes long.The sequence can be of any numberof notes from two to 1024. lf the length is less than 1024 then the unused sections of the memory of the composer can be used for alternative sequences as there is full control over the starting and finishing points of the sequence.

For example, 64 different 16-note sequences or 128 different eighti”lote se~ uences could be stored. The address of the note being played or entered is shown clearly on four seven-segment LED displays whilst the address at the beginning and end of the sequence selected are indicated by the position of the rotary switches which set them up. _ The memory stores not only the pitch of the notes but also their length. There is a choice of six lengths ranging from half a beat to four beats. In addition. a rest 0r series of rests of one beat can be entered.

The composer is programmed from the synthesiser by plugging into the VOLTAGE CONTROL OUT and GA TE OUT sockets, Transcendent 2000 owners needn’t feel left out! You can easily add a couple of jack sockets to the rear panel of the 2000 and fit three bits of wire; VC OUT to IC6 pin 6, GA TE OUT to IC4 pin 6 and common I ine to common line on the HI OIJT socket As for any other synths without these sockets, if the handbook mentions 1 V/octave (the standard) you will be able to find the control voltage at the input of the YCO and the gate voltage at the input of the ADSR. The synth control voltage is converted to a digital code by an integrated A-to-0 (analogue to digital) converter. An integrated D-to-A converter does the opposite on playback The outputs of the composer plug into the EXT VC IN and EX GA TE IN sockets of the synth. Provision is made for the gate voltage to be of either polarity depending on the synth’s requirement (the Transcendent 2000 requires a negative gate voltage). A synth usually sounds at its best when the filter is tracking with the VCO If there is a control input for the VCF put the control voltage into here too. If there is no such socket it will be possible to find a suitable point on the YCF to inject the control voltage, On the Transcendent 2CXXtal ke VC IN to Q10 pin 12 via a 43k resistor.

Now that we are plugged in, one of the note length switches is pressed. Pressing a key now programs in that note’s pitch and length. To enter a rest, ie an interval with no note being played, press the rest switch followed by any key as many times as there are beats in the rest period. It doesn’t matter how long you take between entering notes. Go down to the pub in the middle of your corn position if you like; it wil I sti II play back with perfect timing. What’s more it doesn’t matter if there’s a power cut or anyone pulls out the plug while you’re away. Hands up all those of you who have lost a painstakingly entered computer program that way! The cam- poser, though mains powered, has a trickle charged NickelCadmium battery to supply the memory (which uses a pair of CMOS 4K synchronous RAMs) when there’s no mains connected. After switch-oft the memory will retain the data for months and will change only when reprogrammed. Should you find that vou have entered a burn note – no hassle. Just advance the START-OF-SEQUENCE switches to the offending entrv. press RESET, enter the correct note/riote length combination Take the address to where you left off. press RESET and carry on  PROJECT

Construction and Setting up

The PCB is double-sided so start by linking the two sides with link pins, soldered to both sides, at the points indicated by black dots on the overlay. Now fit everything else except the displays. The tempo potentiometer is soldered to the side of the board which its pins enter. Mica washers are required under the 7915 and the 7815 to prevent shorting to the tracks To fit the displays at the correct height above the board, stretch some 22 swg wire to stiffen it, cut 46 2″ lengths and bend through 90° the last 3 mm of each one. Lay a 10 mm thick spacer bar across IC11-14 and I ay thedisp I ays onto the spacer. Pass a wire through each hole in the displays and down into the PCB, solder the bent ends to the display, turn over the PCB, trim off the excess wire and solder in place. The photographs should make this clear. Above and below: All the switches except the start switch mount directly on the PCB. The photograph below also shows the mounting details of the display.

After the customary cleaning and checking of the PCB fit to the cabinet, wire up the base/rear panel, set the presets to midway and plug in. Switch to ENTER. press a NOTE LENGTH switch and the ST ART switch together with any key. This starts the ADC converting and is done at each switch-on. Press the top note of the keyboard together with any NOTE LENGTH switch. and adjust the input offset null preset (PR2) until the red LEDs are all off, whilst the green LEDs (indicating the three least significant bits which are not stored) show either binary 3 (011 l ie bottom two LEDs on, or binary 4 (100), ie the third one up on. The LEDs may flicker between these states. Next press the key two octaves down and adjust the gain control PR1 ~ that only the top two of the red LEDs are on whilst the green ones again show binary 3 or 4. This ensures that the AOC is halfway between changing the code given by the five most significant bits.

To confirm the correct encoding of each note, enter each one down the keyboard, switch to PLAY, press RESET and observe the red LEDs progressively showing a larger binary number. Set the ST ART OF NEXT SEQUENCE switches to 0003 and the ST ART OF SEQUENCE switches to 0000, press RESET, enter the note two octaves down from the highest three times (any note length). Switch to PLAY with TEMPO halfway advanced and adjust PR3 for 2 Von VC OUT ie set the control voltage to 1 V/octave. Now you can bolt together the cabinet and start composing!

The voltage control input (pitch dala) isapplied via 1(22 to the A-to-I) con\lerter IC23 which produces an ei1hl-bit binary code equi\lalent to the pitch \loltage. (1 and R34, in conjunction wilh an internal Schmitt trigger, form the internal clod ope..atin1 at a 1- hundred kilohertz. All eight bi!$ are monitored by LEDs,d riV4!nb y 1(24 and IC25a and b, although only the fo1e mosl significant biture used. Th~ go on a data bus connecliOR to the memory and the D-to-A converter IC26, the reference currfflt for wt.idl enters pin 14. The qu.tntized current from pin 4 generates a volt.age across R46. Q1, CS, IC27b form a sample and hold circuit, controlled by the output 11ate signal. This permits a chan1e in pitch only at the !-lme time as the gate pulse starts. The output of 1c2, changes a clock ph.ue e..-lier. ICl-10 encode the addresses set up on SW1~ to the equiv,ilenl 10-bit binary codes. IC1 > 17 form a binary counter which is reset to all zeros at suitable times by theoutpul of IC21.1(18-20 are bin,1ry adders which add the output of the counter to the output of IC1-5 to produce the addr~ code for the memory, Thus when the counler is -•• the memory address is that set up by the ST ART OF SEQUENCE switches SW1-4.T he outputs of JC(>-1a0r e comp;ired with the memory address by -the 10-bit comparator IC 21 – a reset signalis gene, aled when they ue the same, so the sequence is finished and &oe!i bad: to the start. The seYen-segment displays are driven by the decoders IC11-14 which are CQmlected to the memory address bus. When enterin1 data the counter is clod<ed by the gate pulse applied via IC2Sf, IC33a, IC37b, IC2Sc. A55uming the liynfh to be correct· ly adjusted wilh the pitch vollage changin1 before the pie signal is produced, lhe pitch \IOltage changes when a key goes down and the AOC generates the appropriate code. The gate signal then puts lhe memory into the write mode and enab~ the tri~f.1.te buffer IC31 and the AOC, entering the ADC data and the nole lengt!\/rest data from IC30, 1(31 into the memory. As the key is released the pie signal ceases, the memory is returned to the read mode and the buffer and ADC are disabled. The end of the gate signal results ina nex;ative pullie from IC2Sc pin 12. On its negative going ed1e the counter addlione lo the address. The pulse iii also applied via Q4 to pin 8, the enable input of the memory, briefly disabling ii. As pin 8 returns to O V the new address is latched in. The base of Q4 isalso connected to the reset circuit so that the latched-in address is updated when the co11nter is reset. IC38 is an a5ymmetric reLuation osollato, prodl.lcing a 1 :2 mark/space ratio pul,eat IC37 pin l, the negati\le edge of whic:h cloc~ the divide-by-eight counter IC36. During playback the output of IC36 is compared with the note length/rest data by four bit comparalor IC3S. When there is eqldlity 105 pin, goes hix;h and is applied to one of the two reset pins of 106 \lia IC3Jb, IC37d. When the clock returns to high the other reset pin (pin 2) also goes high, resetting the counter. The counter therefore counts as far as the binary code from the memory, stays there for one phase of the clock and resets to ztto. The alheros state of the counter is detected by 102b, the output of which cloc”5 the address counter. The clock (in”erted) is applied to IC32 pin 13 to restrict its output to a single clock phase when the counter recei\les no reset ie when the note length is four beats and the memory ruds out all zeros. The output of IC32b becomes the gate signal after passing through IC33c, which inhibit! the gate when data ‘1X1’ iii detected by IC34a le when there is a rest (101 programmed in). The counter is reset after two clock pul5@5b y the output of IC34b. When there ;s • mains supply the logic:r eceives S V via 018, the memory receives S V \lia D16 and the battery is charged via D15. D14raises the output of 1(42 from S V to about SV6 to compensate for the drops ,icross D16, 018. When there is no mains supply the lo3ic is shut down butthemernory .till gets 3 V fromthebatteryvi.i D17.Asthe logic is all down Q4 turns off, disabling the memory so that only microamps are consumed.