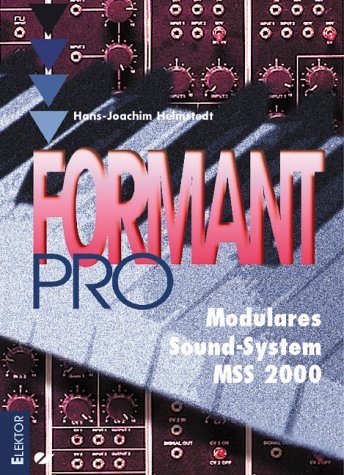 The synthesizer has had its place in electronic sound generation for decades. In the mid-1960s, R.A. Moog developed a modular synthesizer system which – according to the state of the art – had a modular structure. Increasing digitization replaced analog technology – also in sound generation. But there has been a trend back for a long time; the best example are the amplifiers in tube technology, which are in great demand again. For some years now, the call for new, old analog technology has also been getting louder in sound generation. Well, here’s the answer: FORMANT-Pro is the name of the new system and is based on the FORMANT synthesizer released by Elektor Verlag in the 1970s. The system is modular and based on a collection of VCOs, VCFs, VCAs, envelope generators, ring modulators, mixers, LFOs, noise generators and other modules. They can all be connected to each other in almost any way with connecting cables, the so-called patches. The result is the typical “warm, fat” tones that are only possible with analog sound synthesis. With this synthesizer handbook, the electronic engineer with an interest in music as well as the musician who is well versed in electronics has a standard work that is so rare to find.

Vemia says: “This is a professionally built huge modular by Helm Electronics. The founder of the company set himself the task of turning the original Formant modular into a professional and super-powerful machine, and this is the result. The build quality and the sound put it in a completely different league as compared to the Formants you usually find. If you ever wanted to know what this beast can really do, this is the one to get. Massive sound and clear studio quality signal path. Envelope gate and vco cv connections are to a large extent normalised and need no patching but you can of course override and patch as you like. Hugely powerful sequencer and a great keyboard that plays well. I have gone through it and the reverb needs work – or maybe is just missing its tank. Nothing serious at all. I also have a few spares which I will include. It is also extremely beautiful.”