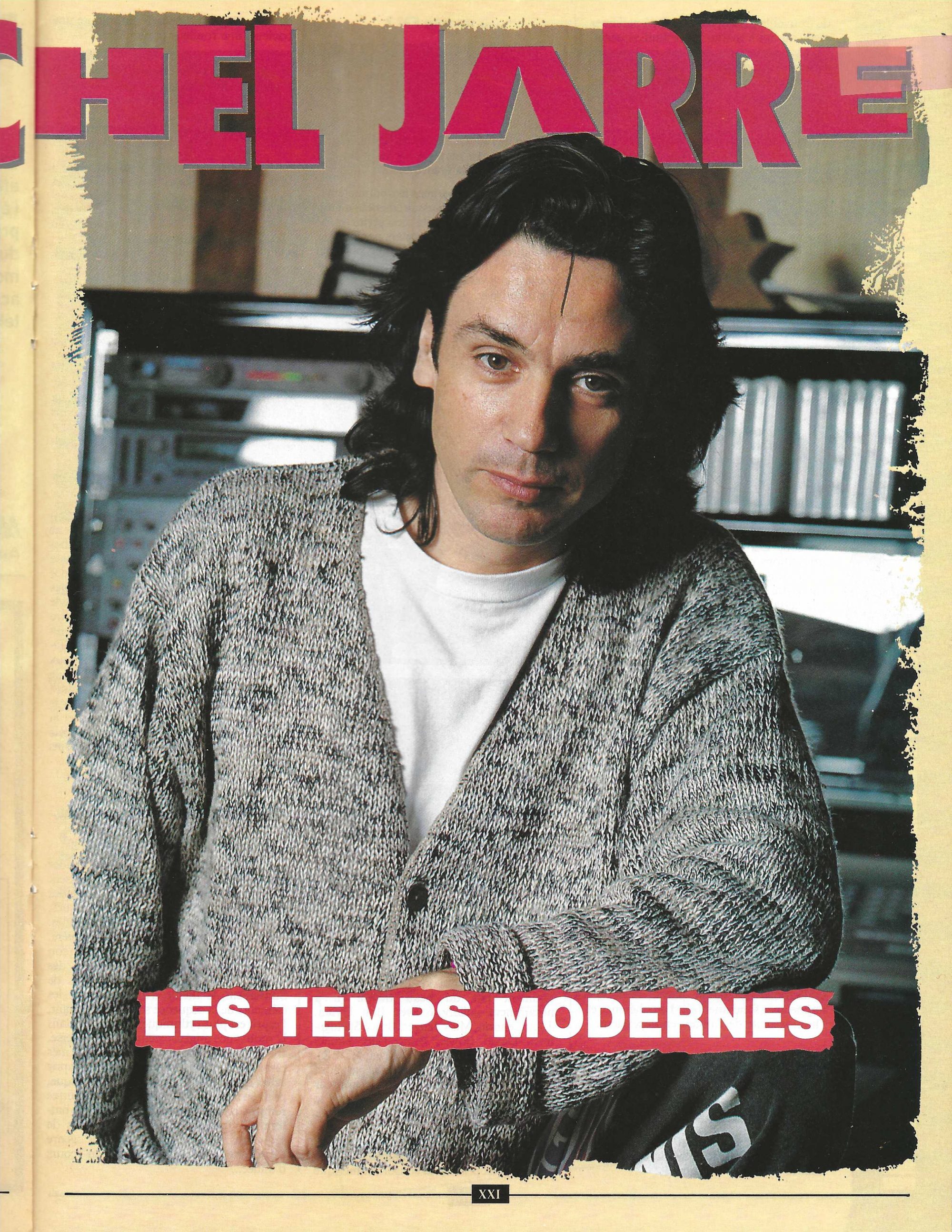 Below the images you can find the (OCR Scanned, Google translated) text of the interview. Please note all (c) by Home Studio magazine and Christian Braut.

“Chronologie is one of the rare high-level albums to have been completely “homemade”.

Assisted by Michel Geiss, Jean Michel Jarre recorded and mixed it in his personal studio.

By the fault of Keyboards, “ Chronology ” had just taken a half-day delay .. . During our interview, we learned that Jean Michel had always recorded at home, since the time of his first studio, in 1969, improvising around two Revox, a modest Allen & Heath console, a VCS3 EMS and of a patch made in a cardboard box ! Today surrounded by an SSL, two Studer A820s, racks full to bursting with peripherals, and, it goes without saying, an imposing collection of electronic musical instruments , he talks to us about his latest album….

Even before composing, I prepared a palette of sounds according to the different atmospheres I was thinking of, transitions between the pieces, which follow one another without being separated by “ blanks ”. The album can also be listened to in a loop : it is designed cyclically. The last title ends with a countdown, followed by sounds that we find at the beginning of the first. I first worked on the fourth part, the first “ single ”. which I had already partially written last year. Once mixed, I advanced all the other titles in parallel. It ‘s the first time I’ve done it this way . For me, the middle of a record is more difficult than its beginning or its end. Starting there, when I attacked the first pieces, I knew that they had to follow a progression leading to this fourth part. A bit like an author would write a novel based on its outcome …

Apart from yourself, Michel Geiss, Francis Rimbert and Dominique Perrier hold the keyboards, Patrick Rondat the guitar. How did the sessions go?

In a very original way : they recorded at home, with all the advantages that entails. Working in a familiar environment, at your own pace, often yields better results. I sent them bases in the form of tapes, MIDI Files, or MPC60 files. If by definition, MIDI Files are supposed to allow the exchange of files between different software, the transfer of tapes or MPC60 sequences implies that everyone is equipped identically, right? On the multitrack side, every musician available knows of a Fostex G-24S. I also have a second MPC60, in addition to the one I use, that I could lend to such and such a victim (laughs). Depending on the case, I recovered sequences or tapes, to transfer them to the Studer. In the context of an album, do you therefore consider the quality of the Fostex as sufficient to support this additional generation? Widely. Considering the Dolby S, its performance is comparable to that of the Studer, except perhaps, with sounds with very rich transients. Its only flaw : the outputs at -10 dB. Patrick Pelamourgues had to build direct boxes to enter + 4 dB in the console!

Rather than cc sequencing everything, I seem to remember that you record each part on the tape, as you go?

With synthesizers, especially analog ones , you ‘re never sure to find the same sound the next morning. That ‘s why, for security, I usually save them. Sample players and samplers? Regarding loops and rhythms, I used the DJ-70 a lot Despite a horribly long save and load time, I appreciate it for its practicality: the ease with which you sample, loop, assign. I also processed a lot of S1000 samples through the K2000, which played them back directly. Kurzweil converters are better, although Akai has corrected the situation with the new generation : that of the S3000. Models that I would probably have used, if they had been released earlier…

Any other remarks to make, on electronic musical instruments?

We have been very careful with MIDI delays. Some devices, the D-50 for example, induce a huge delay . It’s even worse with old analog MIDI synthesizers. Others react very quickly: the K2000, the JD-800, the 01/W … How to measure this delay? Using a very precise device , the Russian Dragon, which displays in real time the shift between two audio signals. I recorded the click of the MPC60 on the tape, as a reference, to compare it to the sequences and compensate for any delay by advancing the track in question. At a fast tempo, you realize that one or two milliseconds count. On the other hand, don’t fall into the trap of over-synchronizing and quantizing. Under these conditions, a piece no longer lives. Sometimes it ‘s interesting to be slightly ahead or behind. There are rumors that you have had some setbacks with the SSL? And not least! I have big complaints about maintenance and technical service in France. It will be necessary that one day, the representatives of the English or American brands begin to do their job. For two years now, the SSL “computer” has regularly broken down, and I sometimes wonder if our interlocutors are competent. With such expensive instruments , it is inadmissible that one does not profit from a correct assistance. It would be the least you could do, in the middle of the weekend, when a problem arises in the middle of a session, to be able to get your hands on someone efficient. In this country, anyone who is unable to open the technical manual themselves, with a soldering iron on their knees, and find the fault, only has to wait until Monday morning. If the studios among the most important can obviously exercise a certain amount of blackmail, the small structures are only helped out at Easter or on Trinidad. It is unacceptable. Across the Channel and across the Atlantic, there are no double standards. Sometimes, I almost hesitate to get rid of a product, in favor of another whose ‘maintenance is better ensured. The quality of the after-sales service is just as important a criterion of choice as the price … I also take this opportunity, since we are there, to advise against anyone in France working with Quested: not for the quality of what they do, but for the service… This has the merit of being clear! Going back to your album, I find it very wide, very spatial… I “played” pans, like an instrument, and used many effects specialized in stereo processing, such as the Cyclosonic: A small Japanese rack that really spins the sound around. A product much more effective than certain three- dimensional devices which cost a fortune when they came out, and have been worth considerably less for three months … For me, the effects are an integral part of the sound. For the rest, I took the same precautions as with the synths: after having programmed them, I immediately recorded them on the tape. There again, you are not certain, a few days later, of finding the same settings, the same level… Especially for the two Revox B-77s, which I used extensively as echo generators at tape, and with which it is obviously impossible to memorize anything !

How does the tape echo appeal to you?

Numerical deadlines give a inert sound, while the imperfections of analog tape recorders – phase shifts, distortions – give them a lot of life, especially at slow speeds To eliminate dirt, the Revox are equipped with Dolby A. The life of music also comes from the spatialization of sounds . In this album, they move from one end to the other. Bass, mids, treble: everything is very wide. This is one of the reasons why I went to a New York mastering studio, Sterling Sound, where I usually go. This work on the levels, the equalizations of each part, is of fundamental importance . The coherence and the homogeneity of the album depend on it.

Upstream, to make things easier in terms of levels, did you use the SSL stereo compressor?

Especially not! No mixes have been globally compressed on the console. I hate that kind of sound… .

Exactly. Mastering studio compressors are so much better ! On the other hand, we have ensured that each part fits within a reasonable dynamic range.

Coming back to mastering, why not call on the French?

How long have you It took?

Three days and three nights, which is relatively long for a mastering. There are many albums for which the operation hardly takes more than half a day. Greg Calbi, the sound engineer really did great work (he has notably collaborated with Bob Dylan, John Lennon, Mick Jagger, Bruce Springsteen, David Bowie, Brian Eno, Daniel Lanois, Paul Simon and Lou Reed, editor ‘s note ). a day is to be able to take a DAT in the evening, to listen to the result outside the studio and to refine it the next day … On certain tracks, we used a tube converter, inserted between the two tracks and the digital mastering console . A device that adds a color, a particular roundness.

During our previous meeting, you affirmed that imer mixer outside, for a matter of hindsight. “Chronology” is an exception to the rule…

As the project unfolded, it seemed to me more efficient to mix here, with the same fader positions, the same equipment as during the recording. We weren’t in a context of takes, separated from the mix by a few weeks apart : the songs progressed simultaneously, we had to go very quickly.

Still a proponent of analog?

I am very proud to have not only recorded, but also mixed in analog: on 1/2 inch Studer with Dolby SR, which I consider to be the best machine in the world. Compared to a DAT, the difference is enormous. A ten -year- old child would hear it ! The size of the machine is proportional to that of the sound (laughs). What did you choose in terms of monitors? After seeing a certain number of them, we ended up opting for two completely different types of loudspeakers , quite universal : small enslaved Cabasses, the very straight Galiote M2s, and JBL 4408s. I also test the mixes on everything a bunch of little Ghetto Blaster style plays. For stereo effects, among other things, I worked a lot with a particularly xcellent headset : the Sony CD-3000. A derivative of their famous wooden model, which cost a real fortune: around thirty thousand francs! Vi~ Faced with the mixed success of the product – the number of victims must not have exceeded a hundred -, they released an almost identical model, but ten times less expensive … Y

ou entrusted titles to be remixed to different groups. What equipment did they have?

I provided them with copies of the 24 -track master tapes , so that they could dub isolated elements , as well as premixes of sequences, rhythmic dice, themes , etc., intended to be sampled. Each of them remixed in their own way. Praga Kahn replayed the melody with a piano sound, added instruments , voices… , while on some Sunscreem mixes, the theme does not appear: the elements of the sequence are highlighted, the spirit is more rhythmic. Quite in the current English movement. Conversely , Black Girl Rock used all my Vocoder and Vocalist tracks, including those that don’t appear on the disc, to make them the body of the song. Other completely mind-blowing remixes, without drums at all, only made up of sequences and outfits, in the “ambient house” genre , will be released during the year … ‘