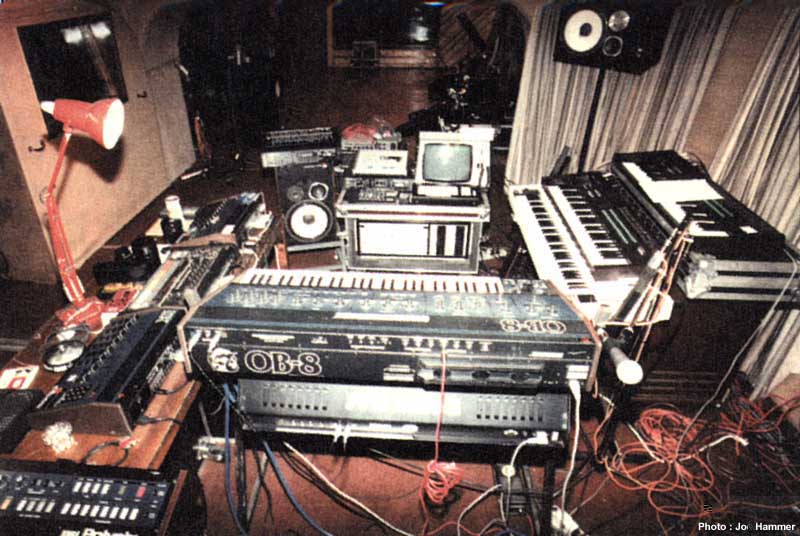 Below the images you can find the (OCR Scanned, Google translated) text of the interview. Please note all (c) by Home Studio magazine and Christian Braut.

Michel Geiss, Jean-Michel Jarre’s closest collaborator , plays many roles alongside him: that of artistic adviser, musician, sound engineer, electronic instrument maker . . do associationt ou azimuths. .. Half-musician, half-technician, Michel Gass started learning music theory around the age of eight before learning to play the accoroem. Later, abandoning his m~ activities in favor of electronics, he obtained a B’ and then became interested in music again. ea looking at analog synthesizers of the time and on the ARP 2600 in part It was during a conference . ‘i gives on the subject, for the French section of the AES (Audio Engineering Society) ‘i meets Jean Michel Jarre. Then maintenance technicim at the Barclay studio, Geiss starts working with him ” Oxygen ” .. We are in 1976. Seventeen years later, the ARP 2600 is still there, and the collaboration of 1kbel more important that ever. .. From where some explanations on the way in which it has con to the realization of “Chronology “, and particularly to the mixing. As artistic advisor, J followed the project from start to finish. We started , Jean Michel and I, by selecting sounds – I have programmed some of them – before even moving on to recordings. Next. as soon as he played a theme, we reflected  together on the best way to enhance it . I also participated certain titles, such as musician. By dint of working with him, and sharing his musical ideas, we have become very close friends. It’s essential : embarking with someone on this kind of adventure requires perfectly understanding their musical tastes, their vision of things … Until now, you supervised the mixes, without taking charge of them. personally.

For cc Chronologie ”, you went behind the console. How did the operations go, what do you have to say on the subject ? After finishing a piece, Jean Michel let me work alone for three or four hours, then come and listen. making some modifications if necessary . When recording the master tape, he was doing real – time panning, certain ” fade in ” effects … A close collaboration! For me, mixing is bringing out all the elements that a composer has put on the tape. Each of them has to find themselves at the right plane of timbre, of the stereop tioning of their role within i two elements struggling . remove one, like not have to do that, I think it’s tricks for chaa= to participate in the other aspect of mixing in its own way . different piece, and to reserve surprise . Christian Braut Does instrumental music mix differently? In the absence of voice, words, the listener’s attention is drawn to the timbre of the melody. Special care should be taken and installed harmoniously in relation to the rest of the accompaniment. The denser the arrangements , the more complicated the exercise . This is the case with the music of Jean Michel: effects, rhythms, sequences. outfits, backings… I must have done very; Warning. Listening to the album, we feel a desire to make full use of stereophonic spaces… Jean Michel is a fan of real- time panning . His style lends itself to it completely. This is one of the advantages of the instrumental, compared to the song, where this kind of effect quickly becomes incongruous: you can’t imagine a guitarist ” turning ” around the singer! On the other hand, a piece based on electronic instruments has no physical reality to respect. Apart from the pans, very specific peripherals were used : a rotation effect, the Cyclosonic, Revox transformed into tape echo generators (see “Kitchen Corner”, Editor’s note), and two old Korg delays, which I modulated sometimes the delay time using the internal LFO… On the second track of the album, they made it possible to simulate a rather particular acoustic space, which would have been difficult to obtain with a reverb, unless you set pre-delays of different durations on the right and on the left. Speaking of reverbs, we sometimes did not record the direct signal , but only the processed sound. Otherwise, we used them in a relatively simple way: two short ones on the Lexicon PCM70, one long one on the 480, with the same basic algorithms, and possibly different durations depending on the pieces. Changing radically from one title to another was not justified. It ‘s a very homogeneous album in terms of effects. How do such wide mixes behave in mono? In this area, nothing is really ideal : more space often means less compatibility. However, many listeners still listen to mono broadcasts, for example on the big waves : France Inter, Europe I or RTL. Not to mention television ! Recently, about a clip for M6, I realized that the sound was better by keeping only one channel, rather than by mixing the two. Even the reverbs “sounded” better this way. We opted for the left channel, because Jean Michel is used to positioning the original signals on that side , and the effects on the right … Unfortunately, in SECAM, unlike PAL, it is impossible to transmit in stereo. It is true that most receivers are equipped with mono speakers, but all the same … Abroad , some TV channels broadcast in stereo. We provided them with a slightly “ refocused” version, better supporting mono listening. Lots of equalizers? Verry much. Once equalized, the timbre of certain sounds has become very far from the original… Whereas in terms of acoustic takes, the spectrum is both limited by the construction of the instruments and the frequency response of the microphones, a synthesizer sound , connected directly to the console , can perfectly contain bass and treble in significant proportions. If the highs tend to reinforce the presence and clarify the tone, the lows are rather disruptive. Insofar as a high level is useless to the ear, it is better to attenuate them by eliminating the superfluous! Apart from the technical problems discussed with Jean Michel Jarre, are you satisfied with the SSL? It ‘s a great instrument. The equalizers, precisely, are of excellent quality. I also appreciate having a noise gate and a compressor per channel, being able to process the dynamics of each signal individually, without having to go through a rack of peripherals, with all the manipulations that entails. On SSL, it ‘s instantaneous. If I remember correctly, it has undergone some improvements, hasn’t it? That’s right. The preamps have been changed. I designed them , and Patrick made them . Their level is more suited to that of synths, and their quality is superior. On the other hand, Patrick had to make changes so that the indicator lights last longer and stop breaking down one after the other! A few words from the listening? I have used the Sony CD-3000 headphones extensively. It respects the whole spectrum fairly well and, like all headphones, allows you to listen independently of the acoustic environment, and therefore more objective. In terms of “ monitors ”, the problem is always the same : it is not only their quality that counts, but the habit that one can have of them. For safety, we are equipped with several pairs of loudspeakers, which does not prevent us from being trapped sometimes. During the mixes, I periodically went to listen to the tracks on the K7 turntable in my car, which I must say is of very poor quality (the turntable or the car? Editor’s note). This allowed me to avoid errors of balance … Did your training as a technician have any impact on your way of mixing? If it is true that by turning a knob, I know exactly what it corresponds to ” physically “, I believe that when mixing, technology must be forgotten: what we hear takes precedence over what is displayed VU meters …