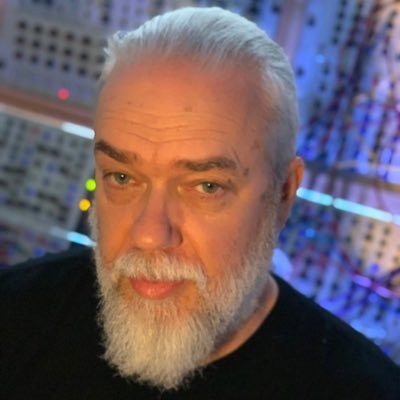 The album will also be available at the ‘Concert in the Bavo Kerk in Haarlem’ event.

“Revolve” is the fourth collaborative project between DiN label boss Ian Boddy and the acclaimed Norwegian composer and guitarist Erik Wøllo. Their previous two studio albums “Frontiers” (DiN39) and “Meridian” (DiN54) were both very well received. They also played live together at the Electronic Circus Festival V and released this performance as the digital album “EC12” (DiNDDL16).

As with their other work together “Revolve” is a continuous sonic journey, with the tracks joined together by slices of sonic ambience and field recordings. Whereas their previous two albums seemed to inhabit the frozen landscapes of the North, this time the duo seem to be exploring warmer climes. The combination of Boddy’s Moog and modular sequencing with Wøllo’s ostinato guitar patterns creates sections that ebb and flow structurally with a beguiling sense of space and freedom. Beautifully ethereal textures give way to pulsing rhythmic sequencers underpinned by solid bass lines and shimmering percussion lines, as evidenced most succinctly on the title track. Over these structures Wøllo’s guitar motifs soar and glide, especially when he uses the EBow to produce a haunting, legato tone colour. The final track “Adiona” sees Boddy joining Wøllo by playing his Ondes Martenot style French Connection keyboard for a stunning duet to close the album.

Certainly cinematic, “Revolve” is a stunning musical travelogue that cries out to be listened to as a whole album and shows the mastery both these composers have in their craft.