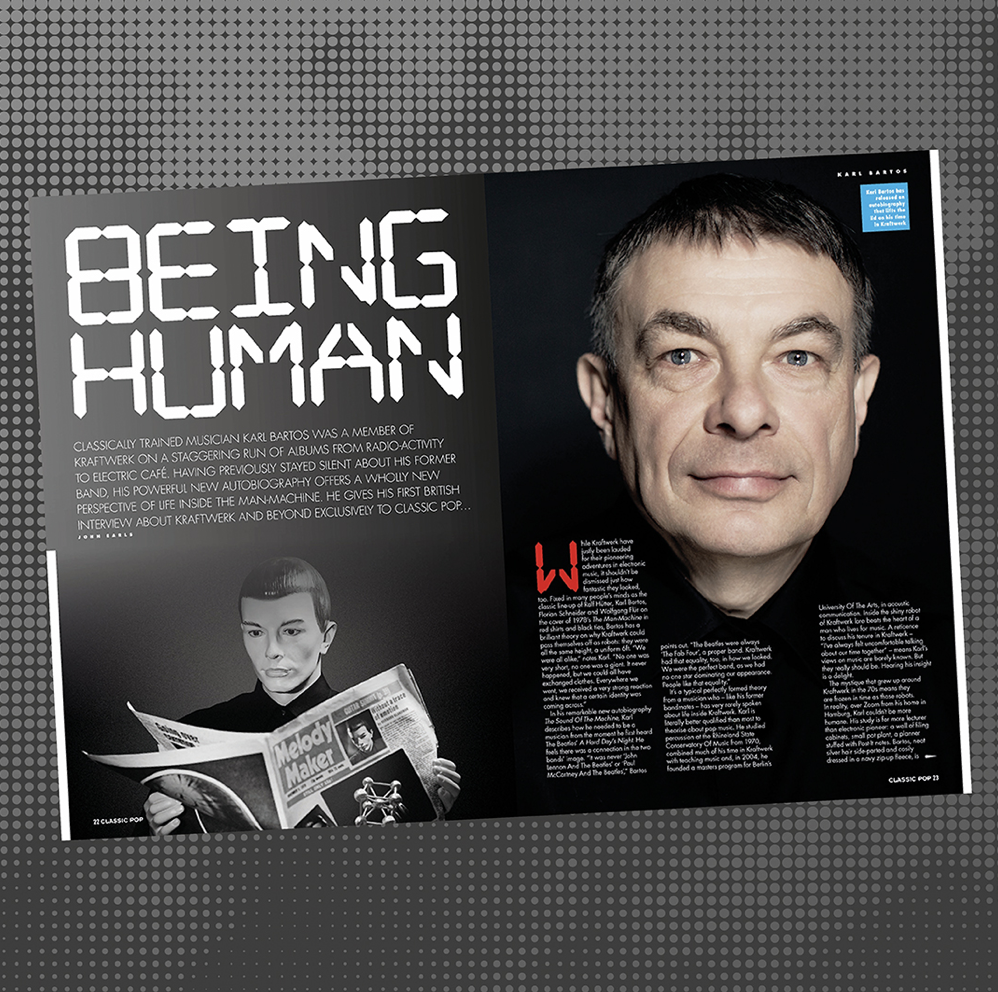 Originally published in German, this book by Karl Bartos is now also available in English.

Available already as of July 21st?

The official publication date of this new book is September 15, 2022. But we received messages that some of the (signed) copies already arrived.

Some of the most beautiful, era-defining music has been co-composed by Karl Bartos. ‘The Robots’, ‘Computer Love’, ‘Neon Lights’, ‘Tour De France’ and Kraftwerk’s 1982 number one single ‘The Model’ all contain his deft musical touch. For the first time, in The Sound of the Machine, Bartos speaks candidly and with wit and humour about his life in Kraftwerk, a band widely acknowledged as being one of the most important in modern music.

In The Sound of the Machine, Karl vividly recalls what it was like to be in the Kling Klang studios during recording, describing the process and perfectly capturing the joy and passion of three people composing and recording.

Now, with a successful solo career of 30 years, Karl Bartos recalls his post-war childhood, the amazement he felt on first hearing The Beatles, his first bands, his parallel career as a musician and teacher, his years with Kraftwerk, and his hopes and fears for today’s musical culture.

‘A full-blooded insider’s account of life inside the Kling Klang studio. This is a must read for the robots’ fans.’ Prog Magazine

Review by ‘New books in German’

Karl Bartos was a member of the legendary German band Kraftwerk from 1975 until 1990, during their heyday as pioneers of electronic pop music. This illuminating book provides an insider perspective on one of the world’s most influential yet notoriously secretive bands.

The Sound of the Machine evokes the incredibly fertile music scene in 1970s Düsseldorf, from which Kraftwerk emerged. The book has a strong sense of location, charting the cultural topography of this cosmopolitan yet provincial German city on the Rhine. A classically trained musician, Bartos played in several groups and bands before joining Kraftwerk. Here he tells the band’s fascinating story: from setting the record straight about the creative conflicts and power struggles between Bartos and the band’s founding members, Ralf Hütter and Florian Schneider, to insights into the production practices at the famed Kling Klang studio and detailed descriptions of the genesis of such iconic songs as ‘Das Model’, ‘Die Roboter’, ‘Computerwelt’ and ‘Tour de France’.

Kraftwerk are revered in the English-speaking world: recent UK concerts have sold out rapidly and in 2014 the band received a Grammy in the US for their life time achievement. The book’s many references to the UK music scene are the icing on the cake of this ready-made bestseller.

Please note that all (c) of the above review is with New books in German.

Karl Bartos was born in 1952 in Berchtesgaden. A classically trained orchestral musician, he was a member of Kraftwerk from 1975 to 1990. Since the 1990s he has worked with numerous musicians and groups, including Bernard Sumner (New Order), Johnny Marr (The Smiths) and Andy McCluskey (OMD). He has also been a guest lecturer at the Universität der Künste in Berlin to teach sound media design. He regularly tours with his live audio-visual show.