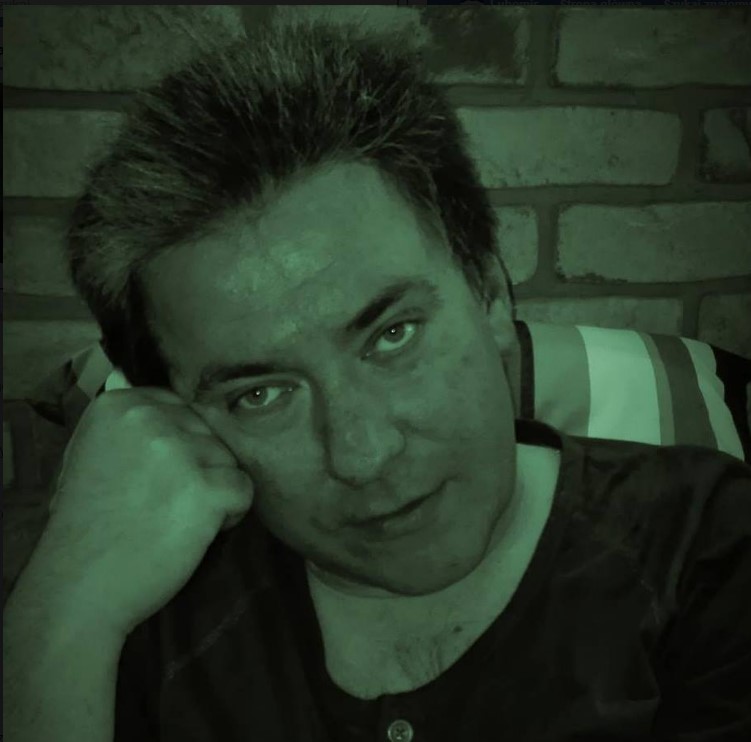 He began his musical education by learning to play the guitar at the age of about 10. Then he studied the secrets of the double bass at the State Music School in Słupsk, which he never graduated from. At the age of 13, he began to gain experience in all sorts of local music bands. He went on his first tour at the age of 14. He founded his first own band at the age of 15, in 1987. The group was called “Van der Krammer”. It was a trio playing electronic music, similar in atmosphere to the achievements of Tangerine Dream, Klaus Schulze or Vangelis. The band’s first major public appearance was the Music Festival. Science – Fiction, organized by the great promoter of the genre, Artur Lasoń at the Ochota Culture Center in Warsaw in 1988. To the surprise of the young musicians, they took second place with the audience’s verdict. Flesnburg The band existed until 1990, playing concerts and recording materials for subsequent albums, which, however, never saw the light of day. In 1990, he decided to start working on his own account. He wrote two electronic suites, one of which was published a few years later. In 1992, he staged his first performance. At the Rondo Theater Center in his hometown of Słupsk, he presented a performance entitled “Waiting” accompanied by the contemporary dance group “Night Workshop” by Katarzyna Suliga. The concert was quite an event, the invited journalists later wrote enthusiastic reviews in the professional press. A very hot review was also published in the then most prestigious western magazine devoted to electronic music. Artur Lasoń wrote then: “People! This man is not yet twenty years old, and he has staged a spectacle that an artist with twenty years of stage experience would not be ashamed of! “. In 1993, he and his friends set up his own recording studio, where he intended to implement his new ideas. The idea, however, turned out to be a failure. The period of studies did not allow for too active artistic activity. In 1994, the X-Serwis publishing house released Kayanis’s first material – “Oczekowanie” (“Oczekowanie”).

A few small pieces also appeared on compilations promoting young artists. for which he wrote and arranged all the pieces. Without ceasing to write his own music, Kayanis waited for the opportunity to present it in a civilized form. This possibility appeared in 1998. A sponsor appeared, thanks to which he was able to release his first full-fledged album. The project was called “Machines and Dreams”. The material from this album was warmly received by both critics and lovers of such sounds. music at concerts all over Poland. He has been a frequent guest in the programs of Jerzy Kordowicz, who hosts the “Top Tlen” program on the Third Program of Polish Radio. He appeared as a “star” at the Rally of Electronic Fanatics in Pisz. The year 2000 opened a whole new chapter in Kayanis’ artistic activity. About a year after the release of “Machines and Dreams”, the songs for the next album were ready. This time, however, the preparations were to take much longer. Music from the prepared album appeared at numerous concerts, in July, in the courtyard of the Poznań castle, the official premiere of the new suite took place. entitled “Synesthesis”. Together with the band, he performed at the International Music Presentations in Wisła. He became the artistic director of the “KOMP” Festival, held in Kwidzyn. At that time, all professional magazines – Estrada and Studio, Music, Keyboard Instruments, Gazeta Wyborcza and the local press – wrote about Kayanis’ activities. He devoted almost all of the year 2001 to another project. This time the thing was supposed to have a momentum that is rarely seen. A total of about 150 people participated in the production of the album “Synesthesis” – soloists cooperating with the artist, the State Chamber Orchestra in Słupsk under the baton of Roman Drozd and a choir of 100. Recordings were made in four recording studios, including one organized especially for this album. The whole process took about six months. The album was released at the end of 2001. The music on “Synesthesis” is an attempt to implement the composer’s “idee fix”. He always believed that adding adjectives to the word “music” was a misunderstanding. Therefore, on “Synesthesis” electronic and ethnic motifs, classic and rock ones are intertwined, creating a new value. During the breaks between consecutive recording sessions, he realized himself in his learned profession – he dealt with artistic translation for the film and recording industry. He translated songs for, among others. Warner Bros. and the record company Koch International. In September 2001, the premiere of “Synesthesis” took place at the Impresaryjny Theater in Słupsk. Both the concert and the album itself received enthusiastic reviews from all over the world.

Also in Poland, the music of “Synesthesis” is gaining more and more fans. In March, Kayanis and his friends appear on MTV Classic TV, at the invitation of Zbigniew Hołdys, who speaks about the band and music in superlatives. Thanks to this program, more and more fans come. In March and April 2003, Kayanis carries out its first large commercial order – I create the musical setting for the Warsaw radio RDC. Also in April, Kayanis becomes a reviewer in the “Estrada i Studio” magazine, supporting beginning musicians with his comments and observations. The following months are spent on preparations for the next big project – the concert tour “Synesthesis 2003”. Four concerts, each of them different and requiring a completely different approach. After three months of preparation, the largest undertaking in the history of the artist’s activity began. The first concert, which took place on August 19 in Rawicz, was a great multimedia show. The music was performed by a seventeen-person band (a choir, three guitarists, two vocalists, a drummer), the performance was visually enriched by computer graphics prepared by the composer himself, displayed on a large screen suspended on the stage, additional impressions were provided by the street Teatr Nieruchomości led by Włodzimierz Butrym. The show was commissioned by the Museum in Rawicz on the occasion of the opening of the 2nd International Biennale of European Art. The next concert on the tour took place in the “ARSUS” Cultural Center in Warsaw. This time the most important element enriching the spectacularity of Kayanis’ music was the complex and delightful lighting, prepared in cooperation with the most renowned Polish company dealing in this field. Despite the intimate atmosphere of the concert hall, the artists managed to create a real music and light show. The third concert is a completely different category. At the request of the PHILIPS company, the Kayanis team prepared a great outdoor music, light and pyrotechnic show at the end of the “Campus Day” festival organized by this company. Once again, we managed to completely surprise both the organizers and the large audience. With the participation of the best Polish specialists in lighting and of pyrotechnics, a truly breathtaking spectacle was created – a pyrotechnic show. Architectural lighting, a blaze of stage lights and powerful sounding music gave a really electrifying effect.

A few days after this event, Kayanis and his team received an initial invitation to organize another such show next year, with more momentum. The tour ended with an open-air concert in Darłowo, also with a pyrotechnic show and interesting lighting. After returning from the tour, another nice news was waiting for the artists – the organizers of the “Kotana Day” (Polish Television and Radio RDC) – a charity event dedicated to Marek Kotański who died tragically, asked the artist to prepare a short concert as part of this event. The concert was hosted by Zbigniew Hołdys, and at Plac Defilad gathered around 20,000 people and the Kayanisa band ended the 2003 season with this concert. At the moment, Kayanis is working on other projects. The two most important of them in terms of music are the two new albums, which are to be released in 2004 and 2005. There are also plans to release a live album and a re-edition of the album “SYNESTHESIS” with special additions. The artist and his crew are also preparing the initial assumptions of the great open-air concert to be held next year, in the most beautiful scenery you can imagine for this purpose.