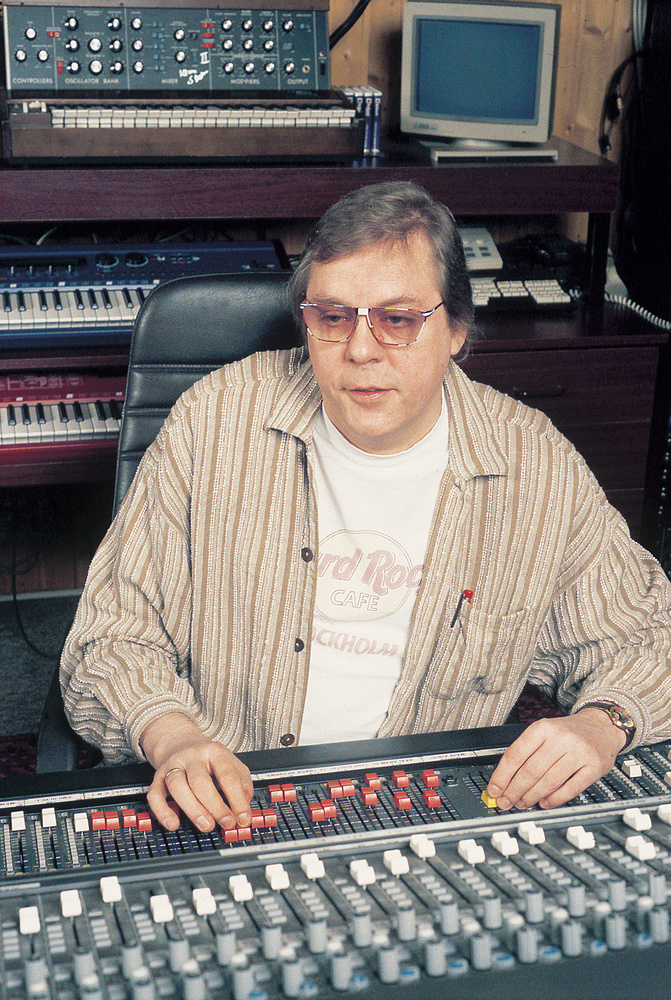 This review was written by Sylvain Lupari and kindly reproduced from his website synthsequences.

Many thought that Klaus was going to retire with an album as average as Silhouettes. I liked that album, but it lacked the fabulous Schulze essence that could take us on a journey on his timeless waves, and repetitive and nuanced synth loops. But no! Klaus Schulze was going to say a real farewell with this sublime album that is his posthumous work DEUS ARRAKIS. Posthumous by necessity. Since this last album of the master of German electronic music (EM) has marinated in inexplicable delays, and still unexplained. So that it was finally released 9 weeks after his death on April 26. The source of inspiration for DEUS ARRAKIS comes from a conversation between Hans Zimmer, who composed the music for the film Dune 2021, and Schulze, to whom he asked permission to use the basics of Frank Herbert, a track released in 1978 on the magnificent album X, for the music of the film by Canadian filmmaker Denis Villeneuve. That’s all it took for Klaus to dive into the Dune universe. Let’s say it from the start, DEUS ARRAKIS has nothing to do with the 1979 album Dune. The only link is the presence of Wolfgang Tiepold on cello. That’s all!

Osiris sets the tone for this album whose main quality is to restore the quiet presence of Klaus Schulze on keyboards. A humming musical bass layer mumbles on a shroud of static mist in its opening. Synth layers already envelop this meditative opening with their emotive nuances unique to the Berlin keyboardist’s vision. A line of sequenced arpeggios begins to gallop feebly, creating a circular ambient rhythm vaguely reminiscent of the majestic In Blue album, both in sound and texture. The bass extends its dormant grip on this abstract rhythm, increasing the musical richness of a track that brings Schulze fans back to the 70’s with a soft atmospheric texture devoid of percussive and orchestral bursts. The orchestrations reside in those layers that sway the music between its light torment and deep serenity to which Schulze grafts his electronic chirping effects that marry a rhythmic backbone that is as evasive as it is silent. The intensity increases a notch around the 11th minute where the rhythm takes a much more accentuated tangent, unfolding its magnetizing power in a long stroboscopic filament where the jerky flow reminds us that the recently deceased musician liked to add a base of meditative trance to his music. As ambient as it is! So is the 18-minute journey of Osiris that rolls like a calm and eternal sea between ears still sore from mourning.

Guided by an abstract cha-cha-cha figure, Seth is more animated! After an opening typical of Schulze’s Dantean works, synth waves building up like sonic remnants of THX tapes, the beat settles around the 30-second of the 4th minute mark. It hops around in a slightly spasmodic way with sequenced keyboard chords that leap back and forth in a rhythmic line embroidered of contrasting tones. The soundscape flirts with immense cosmic corridors more here than in Orisis. The vocal layers are discreet and efficient. Paired with the keyboard riffs, the delicate lunar orchestrations and the bouncing sequences, they covering this Seth section with a gloomy aura that is almost tenebrous. Wolfgang Tiepold’s cello makes a first cut in the rhythm just before the 12-minute mark. His tearful solo is coated with a layer of sizzle and cosmic noises, giving a more sibylline feel to this moving passage of Seth. The rhythm, modified, is reborn 4 minutes later. Flanked by the cello, it extends its alternating leaps into a fine texture of uninterrupted jerks that shudders like virgin Bambi feet on a frozen pond. There’s a fascinating Tiepold-Schulze poetry here that translates into one of those mesmerizing yet without overflowing rhythms of the Berlin genius’ repertoire. The cello dominates these moments with a musical grace that pays homage to the delicacy of Klaus Schulze. The rhythm falls silent around the 23rd minute, leaving Seth to wander through the corridors of an ambient music full of the sonic fantasies of a Schulze who is much more conservative and melancholic than in his years when his excessiveness had no boundaries. One feels more the temerity of Silhouettes here than the audacity of Shadowlands, his last great work.

Another very long track, Der Hauch des Lebens starts with a buzzing vibration to which is grafted a sumptuous musical one. This last track of DEUS ARRAKIS is the most ambient and is its weakest according to many critics. And it is true that it is very meditative with a cosmic presence, but a weak track! I’m not really sure of that! Its first minutes are without rhythms, nor sequences. They are built on a heap of synth layers with celestial and Mephistophelian radiance and a propensity to keep the listener on the alert. A first echo of rhythm appears after the 8th minute. Fragile like a silkworm hiding from its predator, it articulates a spasmodic march under the aegis of some sibylline orchestrations of a synth in contemplative mode. The sequencer weaves its line. It skips nervously, like lost steps on a drumhead stretched to the minimum. A rhythm as ambient as it is almost abstract which unrolls a thin circular membrane, a vestige of those elusive rhythms of the golden years of EM. The Berlin School era! This is typical of Klaus during his migration from analog to digital in the MIDI years. Der Hauch des Lebens finds its more atmospheric bearings after the 16th minute. A beautiful moment of intense serenity, adorned with sweet synth strings and Schulze’s unique electronic chirps, which leads us to a last spasm of ambient rhythm in a finale clothed in the gargantuan, pharaonic organ strings that put the famous Berlin musician on the map in 1972.

So, the fate is sealed, DEUS ARRAKIS is the last album of Klaus Schulze. Unless Klaus D. Mueller pulls a rabbit out of his hat. Which would not be surprising! As far as I am concerned, Klaus does not invent anything on this album. On the contrary, he offers his audience a sober work that shines with his unique prose for an atmospheric EM guided by ambient beats. The delicacy and the sensitivity of DEUS ARRAKIS join these oneiric tracks scattered between Timewind and In Blue. A melancholic Schulze who transmits us his past, knowing without a doubt that his end is inevitable! For me, it is a wonderful intimate moment from which I cannot detach myself… the true strength of this DEUS ARRAKIS!