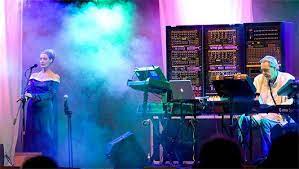 I was shocked to hear that Klaus Schulze passed away yesterday on April 26, 2022 at the age of 74, after a long illness. He left not only a great musical legacy, but also a wife, two sons and four grandchildren. The multi-instrumentalist, but above all a synthesizer virtuoso, Schulze was a founding member of the electronic rock band Ash Ra Tempel and played with Tangerine Dream for a while, after which he started a solo career. Klaus produced tons of albums, including music for films. Unfortunately, Klaus will not see the day that his new album Deus Arrakis will be published.

I have witnessed some of the many live performances of Klaus Schulze, of which the most memorable was his concert in Groningen (1983, thanks for correcting the date Wouter..) and in Köln (under the Dome). I will play my favourite Schulze album Dreams on and on and on….