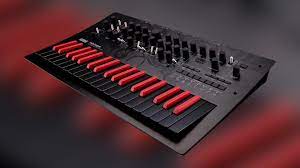 Korg have revealed the Minilogue Bass, a limited edition four-voice analogue synthesizer which they say retains the hands-on control and playability of the original Minilogue, and has been optimised to deliver deep, dark, and thunderous bass sounds.

The Minilogue Bass features an all-analogue signal path, and is equipped with two VCOs, a switchable two-pole or four-pole VCF, a pair of envelope generators, a VCA, and an LFO. The instrument also boasts cross modulation, oscillator sync, and ring modulator functions, and offers the same waveshaping capabilities as the original Minilogue. A built-in delay effect offers Hi-pass Cutoff, Time, and Feedback parameters, and can be placed both pre- and post-filter. An on-board OLED oscilloscope is also present, displaying the waveform being produced by the oscillators.

100 professionally programmed preset patches exclusive to the instrument are included, with a further 100 slots available for users to store their own patches. Korg’s Minilogue Bass Sound Librarian software allows the entire library to be saved to a computer, and offers the ability to load existing Minilogue patches alongside additional factory and bonus libraries from Korg.

The instrument’s four voices can be used in a range of different configurations thanks to eight selectable modes. A Poly mode allows the Minilogue Bass to function as a four-voice polysynth, whilst selecting Duo will stack the voices into two unison pairs. Unison mode stacks all four voices together, allowing the instrument to be played as a monosynth, and Mono provides the same behaviour but with the addition of a sub-oscillator.

Using the Chord mode will result in the four voices forming a chord, with a range of selectable options, and a Delay mode triggers three voices in a delayed sequence after the first voice is played. An Arp mode utilises the Minlogue Bass’ arpeggiator to play up to four voices, and lastly, Side Chain lowers the volume of the previous note each time a new note is played.

The Minilogue Bass also features a 16-step polyphonic sequencer, which is able to capture the motion of up to four of the instrument’s parameters. It is capable of being overdubbed or step-sequenced, and also allows its root playback position to be changed whilst running by playing a new note.

MIDI connectivity is provided via both USB and five-pin DIN sockets, and Sync connections provided on 3.5mm mini-jack sockets also allow the instrument to be integrated with Korg’s range of Volca and Electribe instruments, as well as the SQ-1 sequencer.

The Minilogue Bass has a striking look, sporting black and red keys. Korg say the instrument also features a roadworthy construction, with all of the front panel controls utilising metal shaft chassis-mounted potentiometers.Instrument: