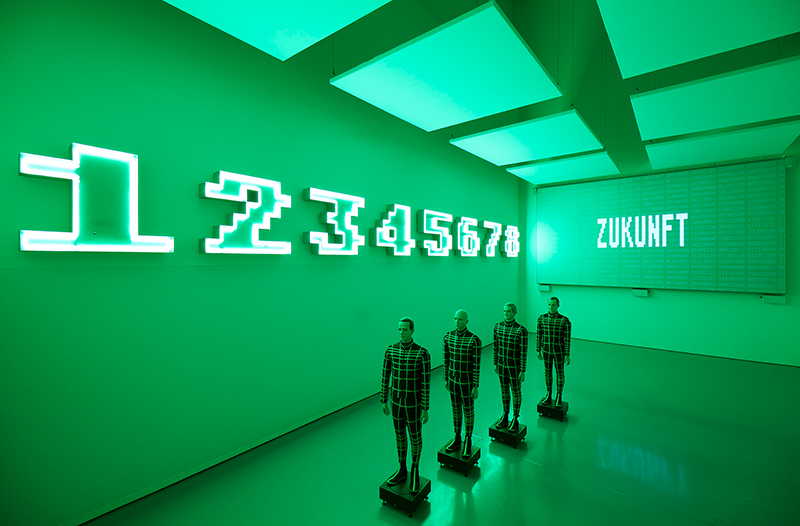 Kraftwerk are established nightlife icons, and watching the German electronic music pioneers emerge before sunset in Victoria Park felt rather surreal. This was a long-awaited appearance; the quartet’s London date was originally scheduled for 2020, around the time when their creative legacy was being explored in an excellent exhibition at London’s Design Museum, Electronic: From Kraftwerk to the Chemical Brothers. Now the two acts were heavyweight co-headliners at the multi-stage All Points East presents Field Day festival. While Kraftwerk’s catalogue stretches back to the early 1970s, their club culture status (influencing genres from electro to synth-pop to techno) has informed their music since the 1990s, accompanied by an increasingly sleek visual aesthetic. They commenced this live set with the digital funk blitz of “Numbers/Computer World”, before cruising through further seminal anthems: the commanding vocoder of “The Man Machine”; the hypnotic sashay of “The Model”; a tense burst of “Radioactivity”. Kraftwerk’s musical motifs are unmistakable, and their crisp 3D projections have for years been showcased in concerts and galleries around the globe (including MoMA and Tate Modern), yet they retained a scintillating energy here, entrancing young revellers and older fans alike. The festival setting brought highs and lows. Field Day’s bill was superbly programmed overall, with multi-genre standouts including London rave’s rising star Jasper Tygner, Detroit techno-soul dons Carl Craig and Moodymann, and “K-house” DJ/producer Peggy Gou. However, the event was also marred by shaky sound (Kraftwerk’s opening tracks had to compete with on-site fairground noise) and careless attendees who littered the ground with detritus, including 3D specs wrappers. The only answer was to grit your teeth and keep dancing; this music deserved full focus.

Kraftwerk have often assumed automaton guises, and proto-techno groove “The Robots” was a precision banger here. Yet a very human charm prevailed when co-founder Ralf Hütter (who turned 76 on Saturday) left his tech podium to wave “auf Wiedersehen” to the cheering throng. Lasers gleamed through the now dark sky, urging the crowds towards The Chemical Brothers’ stage. The Grammy-winning British duo (Tom Rowlands and Ed Simons) also qualify as club culture elders, despite being considerably younger and more frenetic than Kraftwerk. Their set took flight with the explosive “Block Rockin’ Beats” (a crossover hit in 1997) and covered catchy hooks from across their nine albums (most recently, 2019’s No Geography). Again, the sound quality was variable, but this didn’t quell the audience euphoria; “Hey Boy Hey Girl”’s refrain prompted a mass chant-along: “Superstar DJs, here we go!” Like Kraftwerk, The Chemical Brothers have been both a precursor to commercial EDM and a refreshing antidote to it; they maintain massive mainstream appeal alongside an avant garde edge. Although their records often feature high-profile guests such as US hip-hop hero Q-Tip and Scandi-pop singer Aurora, their live shows centre on the hyper-surreal digital art of their longtime collaborators Smith & Lyall rather than live vocalists. Each tune here featured gorgeous yet unnerving big-screen visuals, ranging from sci-fi combat (for “Eve of Destruction”) to amorphous dancers in perpetual motion. The air of clubbing abandon could only go so far at an event with a strict 11pm curfew. The Chemical Brothers accelerated through their material: “Do It Again” was frustratingly rushed, though there was a joyous blend of “Star Guitar” with New Order’s classic “Temptation”. The closing blast of “Galvanize” didn’t feel like the end. The night was still young and these rhythms were timeless.

This article (c) by Arwa Haider and Financiel Times.