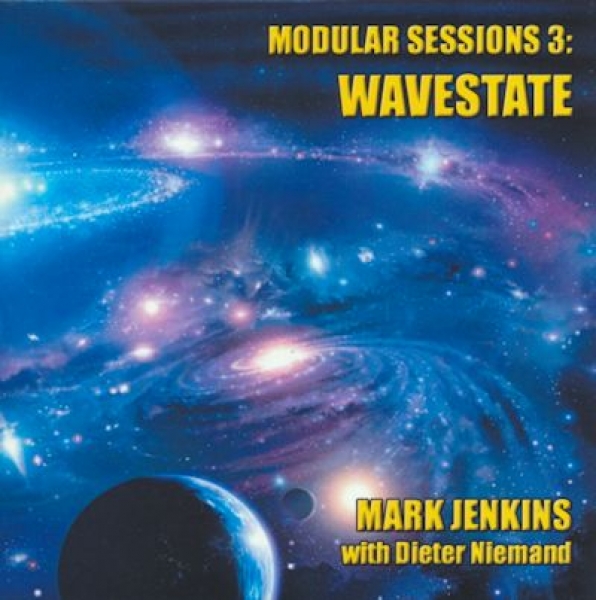 Mark Jenkins just released the 3rd album in the Modular Sessions series – ‘Wavestate’. As with the previous issues only 100 copies are available through C&D Services.

Below the image of the cover you will find the press info and an interview with Mark.

Mark writes: MODULAR SESSIONS 3: WAVESTATE is this month’s issue in the highly collectable limited run numbered CD series of collaborative electronic music. Fans of the Tangerine Dream sessions, Jean-Michel Jarre, Vangelis, and the Klaus Schulze albums with Harald Grosskopf on drums will love this almost hour-long tribute to the pioneering work of CERN on sub-atomic particles, created by MARK JENKINS on the Korg Wavestate synth and a barrage of other keyboards, sequencers and modular systems. On continuously playing multi-sequencer, ratcheting-crammed pieces like “59 New Hadrons And Counting” or “Schroedinger Dances For Joy”, Mark is joined by talented drummer DIETER NIEMAND who has mastered classic krautrock-style, symphonic and electronic percussion. On purchase of MODULAR SESSIONS 3 if you already bought Issue 1 “Galactic Visions” and Issue 2 “Cosmic Tales” you’ll be entitled to a free even more exclusive bonus disk of unreleased music “MODULAR SESSIONS; Bonus Alpha”. “MODULAR SESSIONS 3: WAVESTATE” is exclusively available from C&D Services and they’ll deliver worldwide. There are only 100 numbered copies. Very limited stock remains of Issues 1&2 – buy every issue to receive the exclusive collectors’ bonus disks. Ordering link I hope you enjoy the promotional video of crossfaded extracts from various tracks on the album. There is no download or streaming option. The next issue, Modular Sessions 4, will appear in late March. Mark Jenkins

Amy Triptyline (*) talks with Mark Jenkins about gear & guys on on this new album.

AT – We talked last time about why “Modular Sessions 3” is appearing first not third in the series, and about the Korg Wavestate synth and ideas behind the album. But what else contributed to the recording sessions?

MJ – Well, the Wavestate sat at the heart of the setup for these improvisations, but it wasn’t the only instrument involved. My studio has interconnectable groups of keyboard synthesizers and MIDI modules, software setups and Eurorack modules. Different albums will have a different balance of all these sound sources. On “Modular Sessions 3: Wavestate” there’s some guitar too.

AT – You had a remarkable young drummer Dieter Niemand involved in the sessions also?

MJ – Yes, a lot of the “Modular Sessions” CD’s involve collaborations, and “Modular Sessions 3: Wavestate” is a particularly strong launch title for the series because it has some very powerful drumming on it. I’ve always thought that the best thing to add to a synthesizer performing lineup apart from lead guitar was a great drummer – not the sound of drum machines or loops, although they have their place too, but really human percussion. You can’t beat Tangerine Dream with Klaus Krueger, Neuronium with José Maria Ciria, Klaus Schulze with Harald Grosskopf – there aren’t many great examples, perhaps because of the difficulty of synchronising drummers with sequencers.

AT – So what are the drumming styles incorporated on the album?

MJ – Oh, there’s a great variety, Dieter is very versatile. There’s very fluid rock drumming, a sort of tribal drumming leaning more on the tom-toms, and sounds from an electronic kit. There’s the use of classic drum machines like the Roland CR78, and a bit of orchestral percussion too. No surprise there though, it’s a very rhythm oriented album.

AT – And collaborations on the other albums in the series?

MJ – Yes, the second one is a major collaboration also, and it’s an approach I want to follow up through the whole series.

AT – So when do we all get to hear “Modular Sessions 3: Wavestate”?

MJ – Let’s go into that next time, I have some information coming about where it will be available too…

(*) I As I was reading through this interview it came to my mind that the name of the interviewer is a bit curious. Amytriptyline is an antidepressivum. I’ll ask Mark if this is just a pseudonym for the interviewer or if there is another explanation.