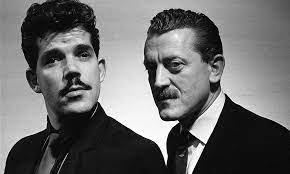 This article, by Eduardo Simantob and Carlo Pisani, was published May 29 in Swissinfo.ch Please note that all (c) are with the magazine and the authors.

Hailed as pioneers of techno music and still filling halls in the wake of a career spanning four decades, the Zurich duo has just won the Swiss Grand Award for Music. Speaking to SWI swissinfo.ch, they explain the secret to success: not to care about success at all.

Boris Blank is the musical brains, but he confesses that he can’t read a score. Dieter Meier is the singer who learned how to sing on the job. Together they are Yello, probably the most globally successful and influential Swiss band in history. These two assumed dilettantes couldn’t be more different from each other – Boris, the shy genius behind the group’s unique samples, and Dieter the lyricist and front man, who also doubles as a business maverick, bohemian, conceptual artist, and gambler.

Yello has so many contradictions in its DNA that it’s hard to fathom how the duo became a sudden global hit right from their beginnings, in the early 1980s. Maybe the reason lies in the fact that they have always been outside of all trends and movements.

Blank and Meier welcomed SWI for a chat in their studio in the noble hills overlooking Zurich, but they insisted on being interviewed one after the other rather than together. We asked their manager whether they were no longer on speaking terms, despite displaying genuine brotherly affection and cracking jokes at each other. “It’s a marriage of 40 years,” replied the manager, “and each one of them has his own style and personality”.

Music to be watched

Yello’s trajectory is multifaceted and goes beyond pop or electronic music. Their videos produced in the 1980s were some of the most creative and wittiest clips aired in a still young and fresh MTV, the American cable channel that turned video clips into an art. So much so that their very first video, made for the song “Pinball Cha Cha” in 1981, was included in a 1985 video-art exhibition at the Museum of Modern Art (MoMA) in New York.

Colourful, cheaply assembled décors, nonsense narratives, and clownish acting gave substance to their electronic rhythms, which moved beyond the exclusive, impenetrable domain of the engineered music of the 70s by musicians such as Brian Eno, Robert Fripp or groups such as Pink Floyd or Kraftwerk.

Yello claims they have nothing to do with these pioneers of electronic music. “Kraftwerk is the total opposite of Yello. They are minimalists and we are more like wanderers through the jungle of sounds. We let ourselves be driven by situations,” says Meier, before engaging in a long appraisal of Blank.

“He never has a concept of writing a song. He starts with some sounds, like an unfinished painting, and then we go to the studio with only a basic idea and let things move ahead in an improvised way.”

Blank’s sounds do not come from nowhere, though. “I was very much into French experimental music and the British industrial music scene of the 1970s, like The Normal’s Warm Leatherette he says, recounting his early influences. Even for a dilettante, Boris was always a devoted searcher of sounds, playing with early synthesisers and oscillators uing all kinds of effects “to make the music more human”.

“Conceptually, I think Kraftwerk is just brilliant, but they wanted to be machines. I wanted a more human touch, that I found in the combination of jazz and electronic music”.

He wanted electronic music to also be fun and spread this joy not just in concerts but in their videos as well.

The Yello clips were the result of years of Meier’s dallying with conceptual art and experimental film. “[When MTV started] we were indeed prepared, because I was already an independent filmmaker, playing with my 16-millimetre camera,” he says. There were no marketing executives steering the band. Meier was left totally free to write, produce, direct, and edit the clips. This autonomy was, and still is, a rare privilege in the global music industry.

The duo never displayed a Swiss flag to point to their origins, and the pop world didn’t question where they came from. To their audience, Blank and Meier could be aliens from outer space. Some hits stroke a chord with hip-hop fans, who thought that Yello were black West Coast rappers. “In the beginning, it seemed that only black kids were interested in our music in the US,” says Meier.

This discretion, which also reflects a typical Swiss stance, was what helped them maintain their autonomy, even at the peak of their success, with the big labels they were working with (Mercury in the United States and Elektra in the United Kingdom). Another factor was certainly their ‘outsiderness’.

Family guys: Boris Blank and partner, Dieter Meier and his wife, together with their four kids, pose on the occasion of the Art Award Zurich, 1997. Keystone / Martin Ruetschi

Both Blank and Meier were well over their 30s when Yello sprang to fame – quite a mature age for new faces to emerge in the pop world. They came from Zurich, a city until then without any tradition or special distinction in the global music scene. The Swiss city, at the turn of the ’70s-80s, was having its very own belated ‘1968 moment’: young people clashing with police, occupations of abandoned buildings, art collectives, illegal venues and parties, an angry punk scene, and heavy drug use overflowing to the open streets.

Yello was born in this setting, but the duo hardly took part in it. Nor were they seen in the techno rave scene and its myriad subspecies (house, jungle, trance, drum&bass etc.) that they helped create. Uncountable DJs copied and sampled Boris’ sounds; some of the most influential, such as Carl Cox and Carl Craig, would pilgrimage to Zurich to mine some of Boris’ gold – his enormous gallery of samples – for their acts.

Before Yello, Meier had an art studio in the Rote Fabrik, an abandoned brewery complex in Zurich occupied by an anarchist collective – today it is an institutionalized alternative art space. The conceptual artist was also a habitué of the small bohemian circles of the city, a well-to-do, dandyish bon-vivant, and professional gambler (“I was not a gambler,” he corrects, “I was a poker addict”).

Not caring about success may have been much easier for Meier, who was already rich before becoming a multimillionaire on the back of his many business ventures, than for Blank, who scraped a living doing all kinds of jobs to survive, such as driving trucks (“really bad – in six months I crashed four times”).  To his credit, though, Meier was never shy of taking risks and making the best of a comfortable situation.

When not making music or playing golf (another confessed addiction), Meier invested in a huge piece of land in Argentina where he grows cattle and produces organic wine sold in his steakhouses and stores in Switzerland. But does he conduct his other business in the same freewheeling mode as he did with Yello?

“No, business is business. But even when I’m a so-called businessman, I’m driven by circumstances. When I started to farm in Argentina, I had one idea, but then throughout the last 30 years more and more things came my way, and I was just catching the opportunities and stumbling into something that I had never expected.”

When asked about his reaction for having won the Swiss Grand Award for Music, Meier sounds surprised. “Did we? So, do we have to go there and attend the ceremony?” Probably yes, it’s quite an official prize, laced with a CHF100,000 check. He keeps mum about what he thinks of the honour, and the mention of the money doesn’t make him flinch.

The future is still rolling on

Meier and Blank today don’t have many plans for the future of Yello, but that doesn’t mean that they are sitting on their laurels. “My biggest dream,” says Blank, “is that we give a concert in Las Vegas to celebrate Dieter’s 90th birthday” (Dieter is 77). The duo has given sporadic shows in the last few years, but they are mostly pursuing solo projects.

Blank is still quite active producing his soundscapes. Currently, he is composing the music for an art installation to open in October in the futuristic scenery of Bishopsgate, a neighbourhood in London, and has recently developed a mobile phone app, yellofier, record and sample any kind of sound and transform it into music.

Meier, for his part, is not very excited about the arts circuit in general, and even less with the Zurich scene. “It is quite a sad time. The last ten, 15 years in Zurich have been very uninspiring. On top of this, unfortunately, we have these very strange people in command of the Kunsthaus here, very mediocre, following some boring trends.” [Among other issues, the Zurich Museum of Fine Arts – Kunsthaus –  is currently under fire because of its controversial handling of the Bührle collection, amassed by an arms dealer who is suspected of having looted, or bought artworks under duress, from Jewish collectors fleeing the Nazis].

Meier wants to make movies, something he hasn’t been able to do in the last 15 years. “I’m a man with a lot of doubts in whatever I do.” When making films, he says, you have to be practical, there is no space for doubt.

It is the same attitude they had when Yello started, as summoned by Dieter. “We had no choice. We did what we had to do and became very original, especially Boris. We never tried to impress people. Sudden success was a surprise, but we were constantly surprising ourselves with our own work without ever thinking about success.”