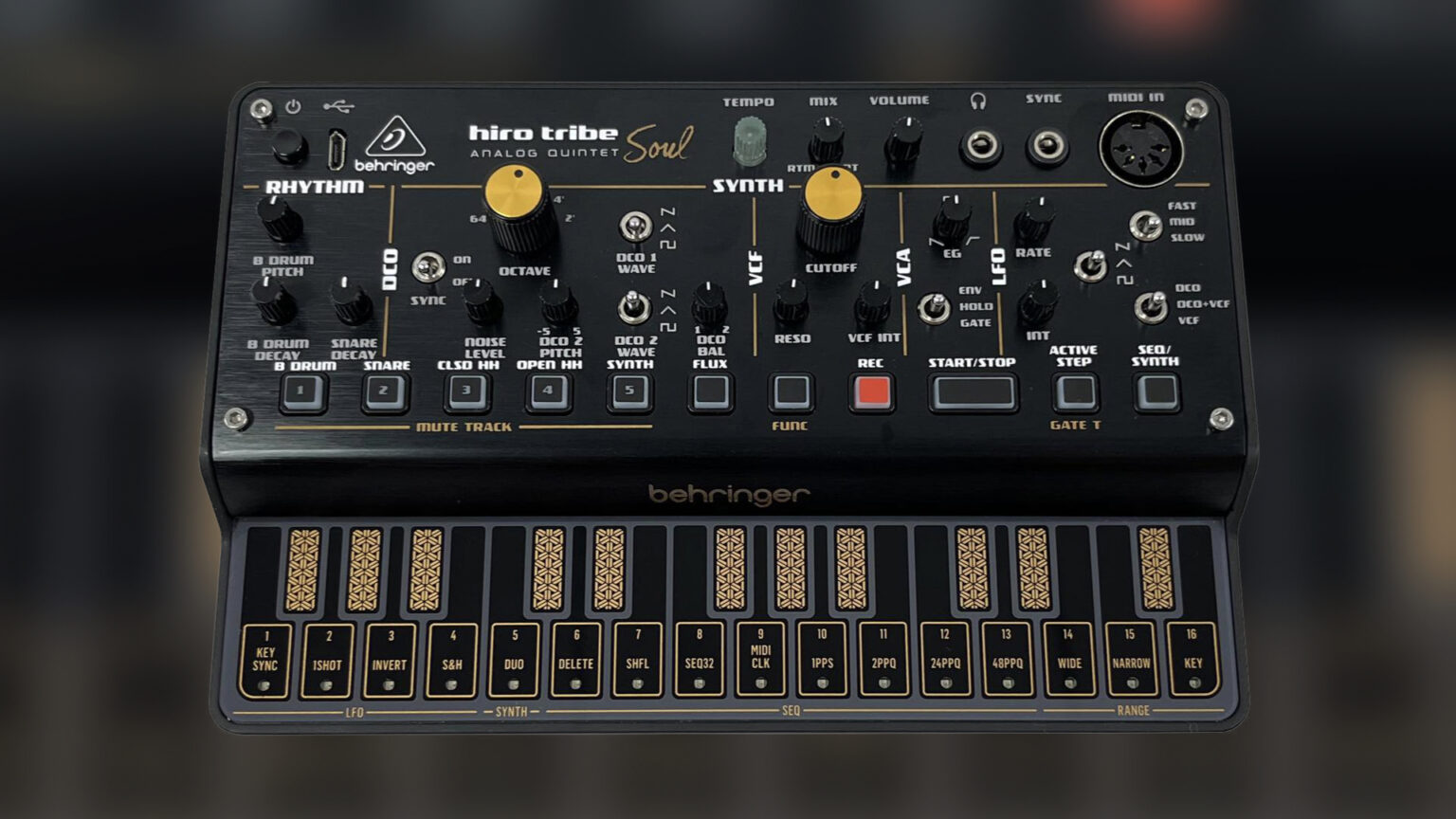 Again Behringer announced 3 mini-synths, which could easily been seen as mini-accordeons:

The Model D Soul is the little brother of the regular Behringer Model D clone. With less analog power but much more compact and affordable. Like its brother, it is based on the circuits of the legendary Moog Minimoog from the 1970s.

Instead of three oscillators, the Model D packs a single multi-wave oscillator (VCO) with saw, triangle, shark, square and pulse waveforms. Plus, you get a noise generator with white and pink noise timbres. Next to this, you have an authentic reproduction of the iconic ladder lowpass filter with resonance control. Must not be missing in any Minimoog-style Synthesizer.

Then, you get a single envelope for the VCA with an option to route it also to the filter cutoff with a variable amount. There is also an LFO with 4 different waveforms that can be used for animating the filter, and more.

You can either play it with the built-in 27-keys touch keyboard or with the 16-step sequencer with 8 memory slots and motion recording. Thus, it allows you to record knob movements in the sequence. The keyboard also serves as a menu for the sequencer and more.

UB-1 is a portable, super-affordable analog Synthesizer that is inspired by the Oberheim Matrix series. It features 2 DCO and a classic 4-pole filter based on the 3396/3397 analog chip designs found in the Oberheim Matrix 6 and 1000. You get individual envelopes for the filter (VCF) and amplifier (VCA). It also includes 2 multi-wave LFOs for adding movement to the filter and oscillator tuning. Initially, I thought it goes in the OB-1 direction, but it definitely a Matrix-inspired synth.

All of this can be played directly on the interface with 16-touch-sensitive keys. Alternatively, you can use an arpeggiator with 3 patterns and an hold function. A sequencer is not onboard. Nice, you can save your patches in 32 memory slots and exchange them via Behringer’s own SynthTribe app.

The UB-1 comes with 6 functions buttons (OSC, MOD, VCF…) and an OLED display for easy and immediate parameter editing. It is powered via the USB socket allowing you to use an smartphone, power bank or computer for powering. The USB socket also transmits MIDI to the synth and offers a comprehensive USB/MIDI implementation (including NRPN/CC control of all parameters and bulk load/save).

Besides the USB connection, you have a headphone output. A classic audio output next to the headphones and classic DIN MIDI is missing, unfortunately. According to the FB post, the UB-1 is fully developed and once they receive the chips, they will be shipping the synth to the retailers.

Since 2019, Hiroaki Nishijima, one of the developers of the legendary Korg MS-20 Synthesizer has been working in the Behringer team. With the mission to design new instruments. We haven’t heard anything about this collaboration for a long time. Now there is news. They collaborated on a new Synthesizer in mini format and with a Korg-like name.

he Hiro Tribe is Behringer’s take on the Korg Monotribe. More precisely, Hiroaki Nishijima, the original designer of the Monotribe, always wanted to create an evolved version of it.  He probably couldn’t achieve this with Korg, so he is now working with Behringer who agreed with this product proposal.

I devised the panel design, specifications and the first schematic. Various specifications were added or changed during the development process, and each time the project members had a hard time. However, looking at the ‘Hirotribe’ that was completed in this way, the hardships seem to be a nostalgic story. Thank you to all the project members, you did a very good job and I am very happy.

Now that the product is completed, I would be honored if you could all enjoy this ‘Hirotribe’ with my heart.” – Hiroaki Nashijima.

The Hiro Tribe is another Synthesizer announcement from the new Behringer mini series (Soul, Spirit). It’s the deepest in features so far.

Hiro Tibe is a portable analog groove Synthesizer consisting of an entire analog Synthesizer with sequencer and drum machine. The synth features two oscillators (DCO) with saw, triangle, and square waveforms and an additional noise generator for a dirtier sound. Then, you get a filter with cutoff and resonance controls.

Modulation side, it has a single knob ADS envelope generator with continuous parameters and a single LFO with three wave shapes. The latter allows you to modulate the pitch and cutoff frequency.

It’s not just a synth, it’s a groovebox. So it also has a built-in analog drum machine with bass drum, snare, closed hi-hat and open hi-hat. Both sections can be played either with the 27 touch-sensitive keys or with the 16-step sequencer with motion recording and memory slots. The keyboard has also non-scale note function and is also used to operate menu functions. As you know from Korg Volcas or from the small modal synths.

On the connection side, you a sync input and output to synchronize with your other synthesizers or drum machines, a big classic MIDI input and a USB micro input. The latter allows you to power the unit via your smartphone, power bank or computer. Behringer says it comes with a comprehensive MIDI implementation (including NRPN/CC control of all parameters and bulk load/save).

Another interesting little portable synth. I’m curious how the Hiro Tribe will sound and whether it’s a mini MS-20 synth or something completely new. We will see it.

Behringer Hiro Tribe will be available in the near future (soonish) for a suggested price of $99 USD. As with the other synths, Behringer waits for the semiconductor chips, then production begins. And they plan many more synths under Hiro’s leadership.