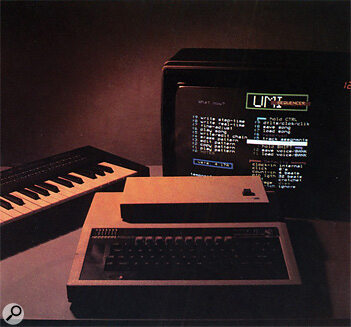 The Norwegian Technical Museum in Oslo has an exhibition with music machines: synthesizers, peripheral hardware, organs, recording machines and more. They introduce this exhibition with: “Where do you draw the line between a musical instrument and a machine? To what extent can music be created without using technology? Does technology stimulate or inhibit creativity? These are just a few of the questions that are addressed in this exhibition. Technology plays a key role in the production, performance and use of music. Some people have been enthusiastic about the possibilities afforded by technology.  Others, however, have been afraid that if machines become more important than human creativity, music will be the worse for it.
The exhibition “Music Machines” has many stories to tell about the relationship between music and technology in the past few centuries. These stories are connected with many unique objects which reflect both the time in which they were created and the people for whom they were created.”

We also found this interersting video from Erik Meyns spontanfilmer on youtube. It shows some parts of the Norwegian Technical Museum and also focusses on the BBC UMI sequencer.

The following is kindly reproduced from Erik Meyns spontanfilmer: “The Norwegian Technical Museum (the NTM) opened a permanent exhibition of old music technology. You get to see piano’s playing “themselves”, the old echo machines and a lot of old gadgets. You can see the old organs, the Mellotron, a Yamaha DX7 synth played by the Norwegian group a-ha, and a rather EXOTIC computer/sequencer system called the UMI. The BBC microcomputer model B and the UMI 2B sequencing system was used by a lot of British musicians (notably Vince Clarke, Erasure, Blancmange, Alan Tarney etc.) in the early eighties. It was also used extensively by the Norwegian group Bel Canto (Anneli Drecker and Nils Johansen). One senior UMI user donated his rare BBC model B with a UMI interface and a monitor/floppy disk drive to the museum. People who live in (Oslo) Norway should visit this exhibition, to experience stuff like a piano owned by the Norwegian royals. It “played itself”. They can also watch the echo machine used to record the old Norwegian number one hit song “The Main Island” (“Hovedøen”) with famed artist/entertainer Kari Diesen. In fact, they can also check out the equipment used to make Norway’s FIRST sound recording, and of course they can make music themselves or play the Theremin’s. People from other countries will have to enjoy this video. All images and sounds are from the exhibition and the recording was done (by me) on a Nokia N82 phone. Funny, I was once a UMI user. Today I can “record” on a device which fits in my pocket. How time flies (*sigh*). I belong at that museum myself. Recording date: July 20th 2009 Recorded objects: Old music technology – permanent exhibition Recording location: The NTM, Oslo, Norway Recording gadget: The Nokia N82“