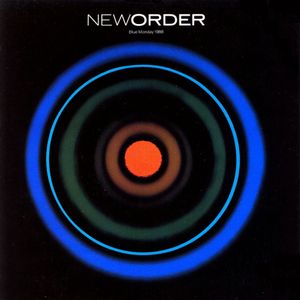 This Part 4 is an interview with Bernard Sumner and Peter Hook about the writing process of Blue Monday. This article, written by Barry Nicholson, appeared in the New Musical Express (NME), January 22nd, 2015. Please note that all (c) are with the magazine and the author. We have added some images for illustration purposes. The original article can be found here.

An overview of the different parts in this series can be found here.

New Order released their first new album in a decade in 2015 – reason to celebrate indeed. However, ‘Blue Monday’, a track that 30 years on, remains as powerful as ever, will always be considered their defining anthem. In 2012, we asked the Bernard Sumner and since-departed bassist Peter Hook how they wrote the classic track, clearing up a few myths along the way…

What do you recall of the writing of ‘Blue Monday’?

Bernard Sumner: We wrote it in our horrible rehearsal room in Cheetham Hill, which had a graveyard piled up in the back of it. I always remember the tea tasting pretty weird because of the water in the kettle. I said to Steve one day, ‘I’m sure something from those graves is leaking through into the water pipes…’ I remember just being turned on by the latest technology that was becoming available. It was pre-computers, pre-MIDI, and I’d built this sequencer from an electronics kit. We programmed everything in step-time using binary code digital readouts. It was… complicated. We could drive a synthesiser through it, but we couldn’t hook it up to anything. Steve had bought a drum machine, but we couldn’t get the sequencer to talk to it. Through Martin Hannett [New Order producer], we’d gotten to know this scientist called Martin Usher, so I took the sequencer and drum machine to him, and he designed a circuit that could make them speak to each other. The day that we wrote it was the day that we brought the circuit in, hooked it all up and pressed ‘GO’ on the drum machine, then the synthesiser started chattering away, and somehow it all worked. Rob [Gretton, New Order manager] thought it was witchcraft. He really did! That sounds weird now in the age of the internet, but he really thought it worked by magic.

Peter Hook: I thought the songs we wrote around it were better. I thought ‘Temptation’ was a better song, especially live. I thought ‘Everything’s Gone Green’ was better. And I thought ‘Thieves Like Us’ was far, far superior. But ‘Blue Monday’ has a sonic impact that very, very few records have. It really was a gift, and it was quite ironic – and quite sad, really – that we stole it off a Donna Summer B-side. It is a weird song. It’s become one of Manchester’s greatest records. We were very lucky to write ‘Love Will Tear Us Apart’ as Joy Division, which was a staple Manchester record, and then ‘Blue Monday’ with New Order. We got one with each band, fantastic!

It’s a song that’s always spoken of with great reverence, but do you yourselves see it as a game-changer? And why do you think it still connects with people, 30 years on?

BS: I don’t really see it as a song. I see it more as a machine designed to make people dance. It comes on in a club and it sounds so powerful, like standing next to a ship’s engine. I was in a club in Berlin a few years ago where they were playing some really good, modern house music, then ‘Blue Monday’ came on and it just sounded great – even in a contemporary context, and up against modern production.

I think ‘Love Will Tear Us Apart’ connects with people because of the emotional content within the song, and I think ‘Blue Monday’ connects with people because of the startling lack of emotional content within the song. It’s kind of contradictory, really. I think the way that everything in it is synchronised, so it’s like all these different gear cogs meshing together, and each synthesiser part is like a different gear. It all comes together like clockwork. If I could properly explain it, I’d write another one! But that’s the beauty of music, there’s no method to it.

How different do you think the musical landscape would look today if you hadn’t recorded it?

PH: It’s a great compliment to be told that you’re one of the inspirations for dance music, but the truth is that we were borrowing from Kraftwerk. We were also inspired by people like Giorgio Moroder, Sparks, people like that. The whole point of inspiration is that you take something as a starting point, and then make it your own. We were very lucky to be able to do that with Joy Division and then New Order.

BS: We were at the vanguard with that song – stuff like that wasn’t being played on the radio or in clubs. There was electronic music, but not much electronic dance music. There were a few people playing music like that in clubs in New York and London, but it was played on real instruments. There wasn’t anything that was as pure and electronic. Suddenly this track came along that sounded different to everything else, so DJ’s started playing it. And it kept coming back into the charts. We actually never got any radio play off Blue Monday; it was a hit in spite of the radio. To be fair, it was only available on 12″, so they couldn’t play it on the radio and it wouldn’t have made sense on the radio, where you could only play a three-minute fragment. So it was through clubs that it became a hit, and then became a hit again, and again and again, as it travelled from country to country.

There’s that famous rumour that despite the vast numbers the single sold in, you ended up losing money on it because of Peter Saville’s sleeve design. Can you finally clear that up?

PH: No, it’s absolutely true. Factory sold it for £1, and it cost £1.10 to make because of the sleeve – which had to have three die-cuts, all individually – the cost price to make it actually cost more than that. One of Steve Morris’ best quotes was that it was the bits you didn’t get on ‘Blue Monday’ that cost all the money. And it was true. Tony ended up having those wonderful brass awards cut for us to celebrate 500,000 sales, when what we were actually celebrating was a loss of £50,000. That could only happen at Factory! They did rectify it later by having a normal sleeve, but that only came after a massive amount of copies had been sold. But that was the way Factory worked. Rob Gretton used to say that to us whenever we were moaning about the money that we’d put into the Hacienda or the money we lost on ‘Blue Monday’, “Fuckin’ hell, what you’ve got money can’t buy.” And he was absolutely right. Whenever I bump into somebody like Bono, or him out of Coldplay, you name ’em, these multi-multi-millionaires, they don’t have an iota of what we’ve got – which is respect. We kept our credentials and never sold out.

BS: It sold loads and loads of copies but we didn’t get any awards for it; being on a small independent label, we weren’t members of the relevant societies. So when it hit 500,000, Tony made up a special Factory Records award, this big cogwheel that was almost like a hammer and sickle. I’ve still got it, actually. It weighs a ton.