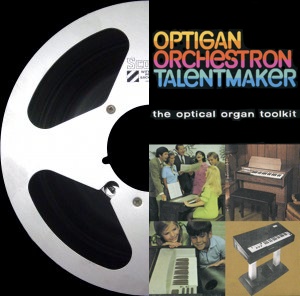 Panoptigan appeared at the recent Synthplex show in Burbank LA. They showed a couple of Panoptigons for tryout, as well as a vintage Optigan and Orchestron.

The original Optigan (OPTIcal orGAN) was developed by Mattel to be able to play back the sounds of real instruments, encoded on celluloid discs with concentric rings. The result was pretty crappy sounding and soon forgotten by the world at large. The Optigan is not a real synthesizer, because it doesn’t synthesize sounds, just like the Mellotron, which played sounds from tapes.

On the Optigan website you will find much more details of the vintage optigan machines and the new Panoptigan.

Each optical disc contains up to 60 sound tracks. The original Optigan® and Orchestron program discs came in many popular styles, some with rhythm tracks and special effects, and our proprietary mastering system allows us to release unissued discs from master tapes preserved by Optigan® guru Pea Hicks. In addition, we have created many new discs, which go further in exploring and exploiting the cyclical nature of the playback loop, resulting in loop libraries with endlessly entertaining combinations.

For a limited time, each purchase of a Panoptigon includes the following starter disc pack