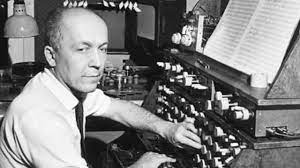 Innovative electronic music composer and physicist Oskar Sala would have celebrated his 112th birthday on Monday.The German is hailed for producing sound effects on a musical instrument called a mixture trautonium that transformed the world of radio, film and television.On Monday, Google is changing its logo in 27 countries to a doodle, or illustration, in his honour. This is his story: Sala was born in Greiz, Germany, in 1910. Since birth, he was surrounded by music. His mother was a singer and his father was an ophthalmologist with musical talent.Sala studied piano and organ at an early age. As a teenager, he began performing classical piano concerts and creating compositions and songs.

At the age of 19, Sala moved to Berlin to study piano and composition with the violinist Paul Hindemith.There, he was introduced to Friedrich Trautwein’s work, an engineer who was recognised for developing one of the earliest electronic musical instruments, the trautonium, an instrument whose tone produces an electronic pulse that is converted into sound by a loudspeaker.The instrument can sound like a violin, an oboe, or a siren and can produce vocal sounds. Sala quickly became fascinated by the possibilities of this invention.Sala focused on mastering the trautonium and developing it further, and this later inspired his studies. In addition, he participated in public performances and toured across Germany to introduce the instrument to others.Sala entered the University of Berlin to study physics in 1932 to advance his research, focusing on expanding his knowledge of mathematics and natural sciences.As a result, he contributed to the development of the volkstrautonium, a popular trautonium produced by Telefunken, a German radio and television company.During Nazi Germany, electronic music was banned. However, Trautwein managed to meet Josef Goebbels, the minister of propaganda, where Sala performed with the instrument.The Nazi authorities approved his work and let him continue.In 1935, Sala developed a new trautonium, and three years later a radio–trautonium which was a portable model for live performances.At the age of 34, Sala was called to the war on the East Front, where he was injured, making him stay convalescent for most of the campaign. Then, in 1946, after the end of World War II, 36-year-old Sala returned to his laboratory in Berlin.And two years later, he started working on his final invention, the mixture trautonium a polyphonic version of the original instrument. His invention was presented to the public at the end of 1952.Sala then built a large version of his instrument, and in 1958, he established his studio at the German film company Mars Film. He began working in the production of electronic soundtracks, including Veit Harlan’s Different from You and Me, and Rolf Thiele’s Rosemary. However, his best-known movie was The Birds by Alfred Hitchcock.In this film, with his instrument, the musician created noises like bird cries, hammering and door and window slams.Sala went on to work for more than 400 films. He was recognised with the Filmband in Gold for his soundtrack work and also honoured with the Merit Cross for a lifetime dedicated to music.In 1995, Sala made his instrument available to the German Museum for Contemporary Technology on permanent loan, and five years later, at the age of 85, he donated his estate to the museum.Sala died on February 26, 2002 in Berlin at the age of 92.