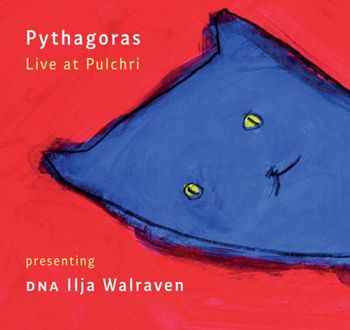 We will add more posts about the Dutch electronic groep Pythagoras in due time, you could also visit their Facebook page for more info.

In the late Seventies and early Eighties I was a regular visitor of the Dutch record shop Moonlight Records, in The Hague. The owner was Bob De Jong (who sadly passed away in 2011), also drummer in the duo Pythagoras, with keyboard player Rene De Haan. Because I was interested in buying a synthesizer, Bob arranged a meeting with Rene, it turned out that his home in The Hague was only a few miles away from my home! His boys room was loaded with synthesizers, after his recommendations I bought a Roland Juno 106 synthesizer. Fifteen years later I met Rene again, at his studio-apartment in the center, he had become a professional artist. And now, almost 40 years after our first meeting, I found the new Pythagoras promo CD from Rene in my postbox, at my house on Aruba, now 5000 kilometers from Rene his home, but I received the CD within 2 weeks!

This live CD contains the final 79 minutes of a 3,5 hour concert from 2015, organized to celebrate the new website of fellow artist Ilja Walraven, and recorded at the place of his exhibition room in the legendary Dutch Pulchri. If you are familiar with the work of Pythagoras, the music on Live At Pulchri will surprise you, to say the least! Because Rene loves to do new and challenging things, and this time the music delivers progressive electronic music improvisations, on synthesizers and Mellotron (digital m1000d) by Rene and on a D-Robber Custom Looper (a self designed sample sequencer) by Rob Bobhof. The duo is backed by Peer Wassenaar on bass and Joshua Samson on drums and percussion, they deliver catchy beats, the one moment hypnotizing or pulsating, the other moment propulsive and dynamic. On these beats Rene and Rob improvise with soli and interplay, culminating in very adventurous musical moments. It sounds like a blend of electronic music with a variety of styles, from funk, dance and ambient to industrial and Berlin School synthesizer music.

Rene colours the music with lots of soli on his Roland JX8P synthesizer (often using the pitchbend, resulting in funky, freaky, funny and flashy sounds) and the unsurpassed Mellotron, I love the ominous psychedelic Mellotron violins sound in some tracks (evoking The Rolling Stones classic 2000 Years Light Years From Home), very exciting!

Part III Conundrum. First a swinging rhythm with a tight beat, Rene shines with a long solo: pitchbend driven and with a lot of echo, at some moments jazzy like Jan Hammer, at other moments freaky and experimental. The sequencing from Rob is outstanding, very special and adventurous. Then those Rolling Stones ominous psychedelic Mellotron violins, and a swelling sound with spectacular synthesizer flights. Finally lush Mellotron violins and choirs, majestic, blended with another pitchbend driven synthesizer solo.

Part IV Nightwatch. It starts with a spacey intro featuring experimental synthesizer sounds and drums, followed by a wonderful part with Mellotron choirs and sequencing, it sounds experimental and hypnotizing. After an improvisation on percussion gradually the music turns from hypnotizing into more dynamic, featuring spacey synthesizer runs, pulsating sequencing and ominous Mellotron violins. Finally bombastic eruptions, what a compelling climate, strong build-up and exciting finale, this is Pythagoras in its full splendor during this live CD!

With the new Pythagoras line-up Rene De Haan has delivered an adventurous new progressive electronic album, a big hand for his daring music!