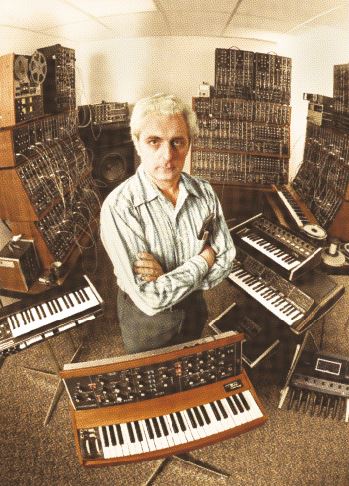 Bob Moog wrote a series of articles about digital sampling, for Keyboard magazine, in the days that digital samplers were a relative new Music technology.

Below you will find the articles (which were completed by Terry Fryer) and we scanned them to include the OCR’d text (below the images).

Part I: a brief history of tape and optical sampling

LAST MONTH WE TOOK a quick tour through musical techno-history, stopping briefly to examine the roots from which today’s sJmpling instruments have grown. We saw that, technically speaking, there are many ways to ‘skin the cat’ of.sound sampling, from drawing the sound’s waveform on a glass disk to using large semiconductor memories to store digital encodings of complete musical sounds. Today’s instruments that let musicians sample their own sounds are all state-of-the-art microprocessor-based digital devices with a random access memory (RAM) capability that exceeds the storage capacity of your average personal computer, and with provision for some sort of off-line non-volatile (capable of being saved indefinitely) storage, usually on floppy disks. These instruments’ operating software, usually contained in one or more ROMs (readonly · memories), contains a series of sophisticated routines (small,self-contained programs that perform specific operations). Together, these are able to do everything necessary to digitize, process, and play back musical sounds. Those who are familiar with the basic concepts of computer architecture recognize that a digital sampling instrument is not that different from a general-purpose personal computer. In fact, you can buy peripheral-plus-software packages for many personal computers that let you sample sounds from a microphone or tape recorder and perform elementary operations on them. The important differences between these peripherals and dedicated sampling instruments are all in the details of the user interfaces, sampling hardware, and operating software. Well-designed sampling instruments are optimized to produce high sound quality and offer ergonomically appropriate control over the sounds, all at a reasonJble cost-the same optimization that is embodied in all popular musical instruments. Some Basic Sampling Concepts. In digital audio, digitizing is the conversion of an audio waveform into a series of numbers that stand for the height (instantaneous amplitude) of the waveform at closely spaced intervals of time. Each of these numbers is called a sample. It is the value of the waveform at one fleeting instant of time, an extremely thin slice of the waveform. The piece of hardware that does the sampling is called an analog-to-digital (A/D) converter. These days, the A/D converter is a single-chip device whose input is the audio waveform and whose output is a set of off/on signals that represent the binary bits of the sample. There is one other connection to the A/D converter that you should know about. It is often called the strobe input. If you think this has anything to do with strobe lights, you’re right. When the strobe input receives a pulse, it grabs the value of the waveform at that instant and converts it to a sample number. In much the same way, a strobe light ‘freezes’ the motion of an object (such as a dancer). Fig. 1 shows how an engineer would draw an A/D converter. The strobe input pulses thousands of times every second, and its frequency is called the sampling rate.

Another analogy might be helpful in understanding the numbers associated with digitizing. That analogy is with video and film. Like digitized sound, film is made up of a series of still images (samples). l.f we see the images rapidly enough in succession, they appear to move smoothly; if the images don’t change rapidly enough, the movie is jerky and disjointed. In a roughly similar way, sound samples appear to be indistinguishable from the original waveform only if they follow one another in rapid enough succession. Now let’s relate the sampling rate and resolution of digitized sound to those gremlins that plague electronic musicians: noise and distortion. Sampling Rate. Unlike our eyes, which have a long ‘persistence of vision’ that lets our brains fill in between the frames of a movie or TV program, our ears hear virtually every change in a sound that produces frequencies between 20 and 20,000 cycles per second (Hz). When we digitize a sound, we first have to decide how much of the frequency spectrum of that sound we want to preserve. Then we have to be sure that the sampling rate is fast enough to preserve all those frequencies through the sampling process. How does one discover the relationship between sampling rate and frequency response? Fortunately, Bell Labs scientist Claude Shannon studied this relationship forty years ago, when digital transmission of analog data was just in its infancy. By using some pretty tricky math, Shannon showed that the sampling rate must be at least double the bandwidth of the digitized signal in order for all of the information in the signal to be preserved. This makes intuitive sense as well: If a waveform is cycling from high to low 20,000 times every second, we need to take at least one sample every time it is high and another every time it is low, in order to get any sort of picture of its shape. In other words, we need to take twice as many samples as the wave has cycles. When engineers design a digitizer, they use sampling rates somewhat greater than Shannon’s criterion. For instance, a professional digital audio recorder runs at a sampling rate of 48k Hz, even though the bandwidth of the audio is no more than 20kHL. In sampling instruments, the sampling rate may be anything from 5 or 6kHz (to digitize a sound that has very limited bandwidth) to 100kHz (which digitizes well beyond the range of human hearing). However, the sa rn pli ng-rate-to-f requency-bandwidt h ratio of 2.4 or 2.5 to 1 is nearly always used. What does this mean for typical musical material? Well, a single musical note of, say, l0kHz bandwidth and 3 seconds’ duration requires about 70,000 samples to digitize. Storing that one single sample takes more RAM than is in the entire personal computer on which I’m writing this column! As we’ll see in a later column, the sheer amount of RAM in a sampling instrument is one of the most important factors in its cost. Accuracy (Resolution) Of The Sampling Process. The more bits are used to record the value of a sample, the more accurate the sample is. A good analogy here is the representation of a black-and-white photo as a grid of dots, where all the dots must be either black or white (ones or zeroes). Using a few large dots will give a very poor idea of what is in the picture, while using lots of small dots packed cl03e together will give a much better representation. Obviously, translating shades of gray into black and white causes some error. The errors in sound sampling add up to unwanted information: noise (if the errors occur randomly) or distortion (if the errors are related to what the desired signal is doing), A good rule of thumb is that every extra bit of resolution in the sample contributes 6dB to the signal-to-noise ratio. An 8-bit sample thus has a signal-to-noise ratio of about 48dB, while a 16-bit sample has a signal-to-noise ratio of 96dB. In terms that we are familiar with, 48dB is what you get out of a run-of-the-mill cassette recording with no noise reduction, while 96dB is stateof- the-art compact disc quality. Sampling resolution is one of the easiest parameters to talk about when comparing two sampling instruments. Other things being equal, a 12-bit machine will offer better sound quality than an 8-bit machine. But other factors can have a major effect on the quality as well. Some sampling instruments offer only linear response (the noise stays the same as the signal level goes down) while others offer logarithmic response or compression/expansion (the noise level goes down as the signal level goes down). These differences, plus the differences in the instruments’ input filters, which limit the frequency bandwidth of the inrnming signals (and al/ digital sampling instruments must hJve input filters), account for much of the individual sound character of the currently avail,1ble sampling instruments. We’ll discuss these and other small but important details of sampling instruments in next month’s column.