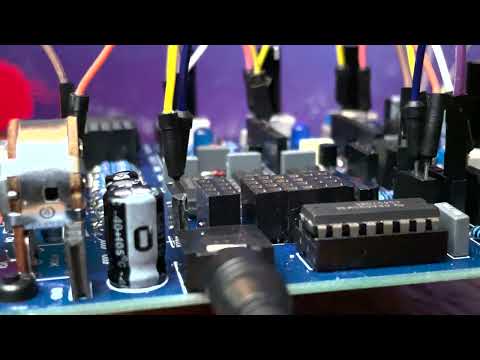 Roundabout – a small patchable synthesizer – developed by Matt Kuebrich – all details can be found here.

There are 3 VCOs, 1 with triangle and square outputs and 2 with saw outputs.

The 4 CV inputs provide increasing levels of modulation, indicated by the white triangle above them. These won’t track 1/V per octave.

Each VCO has 2 sync inputs, one uses a diode and the other an LED. They behave differently (the LED is a bit wilder). Remember: If the signal that’s doing the sycning is faster than the oscillator being synced, you won’t hear anything.

The “trisq” VCO is fast by default. You can patch the 2 points labeled “medium” or “slow” together to change the speed. It’s equivalent to a 3-way “range” switch.

The filter isn’t really set up like a normal filter, so it’s best just to experiment with it. The potentiometers controls the resonance, while the cutoff is controlled by patching into the CV-A and CV-B inputs. These effect the 2 different stages of the filter. For the most typical filter behavior patch the same signal into both of them. You won’t always need something plugged into the filter input, since the filter is very resonant when turned up. There are lowpass, bandpass (2 of them), and highpass outputs. Both filters are the same except the 2nd one is tuned higher.

Patch tip: Patching the BP into the left mixer and the HP into the right mixer (from the same filter) can give you a nice stereo effect.

There are 2 frequency divider sections. They are separated by a vertical white line that is kind of hard to see. You patch in a clock and get a division from /1 to /16. The output will always be a square wave.

This is just an extra buffer. It can be used to overdrive a signal or just buffer a weak signal. For example, the DAC isn’t buffered and in certain situations could need to be passed through this buffer. The buffer is inverting, so can be used to generate an (overdriven) reverse sawtooth wave, for example.

The DAC takes 4 binary inputs and generates a stepped voltage on the output. The 2 output pins are taken from different points in the R2R ladder, so they will be different, but related.

Patch tip: Feeding the DAC with outputs from the divider section, then using that as CV for an oscillator will generate cool arpeggios.

Patch tip 2: You can use the DAC as an attenuator. You actually patch the signal you want attenuated into the right-most DAC output, then patch out of one of the 4 inputs, which will give you decreasing amounts of attenuation. The filter CV inputs, for example, aren’t weighted like the oscillator CV inputs. This is a way to attenuate the signal before patching into the filter CV. You can also use this as a weighted mixer. Olegtron did a great writeup about the different uses of a R2R in reference to their R2R Eurorack module.

Patch tip: you can “loop” the register by patching the 4th register back into the data input.

Patch tip 2: you can get an 8-bit register by patching the 4th register or SR1 into the data input of SR2 and uses the same clock source for both shift registers.

The shift register clock expects a clean square wave. When feeding it something else (like a triangle, saw or the output of the filter), it can behave inconsistantly, but sometimes that’s cool. If you want it to work “properly”, pass the offending signal through the /1 on the divider before going into the clock. This basically turns any signal into a square wave.

Like the CV inputs, the mixer inputs provide increasing amplitude as you patch into it, left to right. Actually the 2 ones in the middle are the same amplitude (I found I used them the most), but the left one is the quietiest and the right one is the loudest.