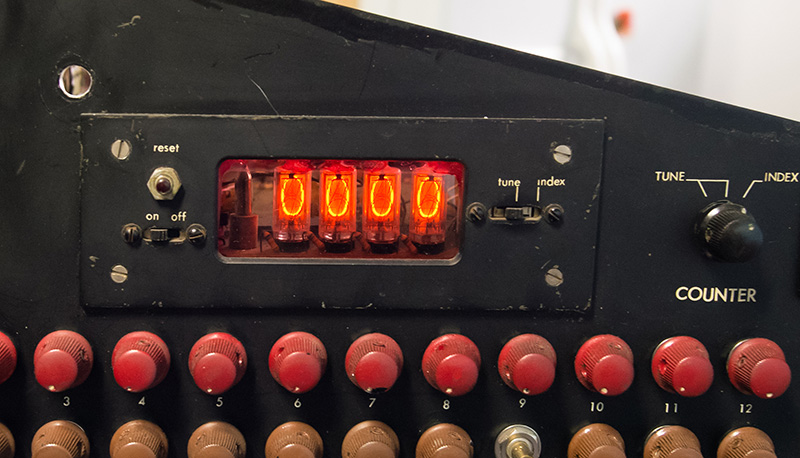 This article appeared in the Gear History range of features at Reverb.com, November 15, 2022. The article is produced by Mark Brend. Please note that all (c) are with Reverb and the author and the first image is (c) Dave Brown. We have added some more pictures of the insides of the Electronium, please note that the (c) of these pictures are with the respective photographers. The Original article can be found here.

Once, a long time ago, recording artists went into studios to record songs, which they may have written themselves, though often not. Usually, they were joined by session musicians.

The arrangements for those session musicians were written by an arranger. An engineer and tape op worked the equipment. A producer presided over it all, deciding what the finished record would sound like. The studio itself was simply a location housing equipment—a recording device, microphones, a mixer, and processors (reverb and echo units, compressors, and so on).

The music was made by the artists and session musicians, using their own voices and instruments, with the addition perhaps of a piano or drum kit permanently housed in the studio. Give or take a few variations, all records were made in this way. It was a world the American bandleader Raymond Scott was very familiar with—and we’ll return to him shortly.

But things have changed. These days, chances are that as we write and perform music, we’re also to some extent engineers, arrangers, and producers. And most likely we’ll use some equipment that it’s hard to neatly pigeonhole as either a recorder, a processor, or an instrument. Is Mark Ronson more a producer than a recording artist, more a composer than a producer? Is a DAW, with its capacity to create, sample, sculpt, record, and play back sound, a “studio” or an “instrument”? The distinctions have blurred into irrelevance.

You might think that the journey from then to now happened recently. In fact, the story can be traced back through the emergence of digital technology in the ‘80s and ‘90s, and then further still to studio auteurs such as Brian Eno in the ‘70s and Joe Meek in the ‘60s. But it all started way back at the dawn of electronic music in the late ‘40s and early ‘50s, when maverick pioneers were simultaneously composing and recording music in studios they’d assembled themselves, equipped with gear they’d built from scratch or repurposed.

There was Tristram Cary in Oxford, UK, with The Machine, a collection of military-surplus electronic equipment, a derelict harmonium, and a disc-cutting lathe. And there was Louis and Bebe Barron holed up in Greenwich Village, USA, with their Stancil-Hoffman tape recorder and home-made oscillators. Both studios were active in the late ‘40s. Which brings us back to Raymond Scott.

The Barrons’ studio was typical of many home-based electronic facilities of the time, with the bulky equipment crammed into the couple’s living room. Not far away, in Manhasset, Long Island, there was another home-based electronic music studio that was an entirely different prospect. It was a futuristic domain of shining chrome, white walls, and a galaxy of twinkling lights. And it grew to occupy eight rooms of a 32-room mansion that belonged to the man calling himself Raymond Scott. As home studios go, it was in a league of its own.

Though he operated for nearly 30 years from the early ‘30s in the traditional studio system, Scott was always a little different. Born Harry Warnow in 1908 in Brooklyn, New York City, the younger son of Russian Jewish immigrant parents, he studied piano, theory, and composition at the Juilliard School of Music. After graduating in 1931, Warnow played piano for the CBS Radio house band, conducted by his older brother, Mark.

At this point, he became Raymond Scott, to spare his brother from accusations of nepotism. The CBS gig was the start of his varied and lucrative career as a pianist, bandleader, and composer. That combination of roles was not unheard of at the time. Think of Duke Ellington, for example. What was unusual, though, was that almost from the off, Scott took an interest in the technical process of recording sound.

He was often found in the control room of his own sessions, effectively acting as producer or engineer, even when others were nominally assigned those roles. He had his own disc-cutting recording equipment, years before tape recorders appeared, and he would use it to record and analyze his band rehearsals.

It isn’t entirely surprising, then, that Scott—a gifted, trained composer and musician with an affinity for sound and sound technology—became interested in electronic music in the post-war years. He wasn’t the only one.

The Barrons and Cary were also trained musicians with an interest in sound technology. Daphne Oram, another pioneer active at about the same time, was musically gifted, though she turned down an opportunity to study music in favor of a studio job at the BBC in London. The thing that set Scott apart was that he was rich. And he plowed a significant portion of his income into his new enthusiasm.

Scott was secretive about his electronic music work, so it’s hard to put dates and details into the story. But in 1946 he formed the first of several electronics corporations, Manhattan Research, Inc., and was soon patenting electronic musical devices.

Hindsight reveals Scott as more ideas-man than business-man. Glossy brochures advertised a dizzying array of his inventions: electronic doorbells, multitrack tape recorders, rhythm machines, sequencers, and instruments such as the Clavivox, a kind of keyboard theremin. But these rarely sold. It’s possible that didn’t bother Scott too much, as through the ‘50s he was still earning well from the first phase of his career and had a new income stream composing electronic jingles—for Sprite, Nescafé, and Baltimore Gas and Electric Company, among others.

By Scott’s own account he built his first sequencer in 1960, inspired by Wurlitzer’s Sideman drum machine of 1959. He almost certainly used sequencers in his 1962 trilogy Soothing Sounds For Baby, a set of records featuring ambient electronic music intended to send infants to sleep. Consisting of overlapping, repetitive patterns of electronic sound, the albums were years ahead of their time.

Scott’s sequencers became part of his most ambitious invention, the Electronium, which he started around 1959. Developing this machine gradually consumed him at the expense of other projects. The first iteration was, in Scott’s words, “a gigantic room full of equipment.” He sought investment to build another version that he envisaged to be the size of a home electric organ. No backers came forward, but an article in Varietymagazine about Scott’s idea caught the eye of Motown Records boss Berry Gordy.

Scott did not intend the Electronium to be a performing instrument in any conventional sense. Rather, he imagined it as a means to simultaneously compose, record, and play back new music. It was to be an “artistic collaboration between man and machine,” he wrote in 1970, though he was somewhat opaque about what this might mean in practice.

Gordy, meanwhile, was sufficiently intrigued to hire Scott in 1971 as Motown’s Director of Electronic Music Research and Development. Scott moved to California and—funded by Motown—continued to work on the Electronium until 1977. It seems that nothing much came of this, and if Motown did make any Electronium recordings, they have never been heard.

Like Daphne Oram’s Oramics system, Scott’s Electronium was a grand plan never fully realized. Unlike the Oramics system, though, it at least looked finished. Photos of the surviving model, the Motown iteration, show a three-sided console housed in a dark-wood cabinet, adorned with neat rows of lights and switches. The operator sits enveloped in the console, as if embraced by it.

After Scott died in 1994, this Electronium lay forgotten in a garage until rescued by Mark Mothersbaugh of Devo. There is talk of restoring it to working order, but this is proving to be a challenge. Work has been stopping and starting for at least 15 years.

Darren Davison, who has been involved in the restoration work, said in 2011 that this surviving Electronium houses a 12-channel sequencer. Each channel has a tone generator assigned to it, and each tone generator has controls that adjust the sound, including accent, tremolo, and reverb. All 12 channels can be played simultaneously.

According to Alan Entenman, an engineer who worked with Scott on the Electronium around 1970, the tone generators, filters, and noise generators are analogue, but all parameters are controlled digitally, and music could be stored and reproduced using an integrated digital recorder that saved and played back the Electronium’s settings.

Quite how—or how well—this all worked remains a mystery. Drum machines of the time might have 12 preset rhythms, which could be combined and the tempo modified to give multiple permutations. Entenman indicated that the Electronium—or at least the version of it Scott was developing in 1970—worked on a similar preset principle, magnified to the nth degree and offering millions of permutations.

Regardless of how the Electronium worked then, and the extent to which Scott was able to develop it subsequently, the idea was prescient. An all-encompassing system with which a musician or composer can interact to create, modify, record, and play back music seems a lot like a DAW. Think of the presets on Scott’s Electronium as something like the loops that come pre-loaded with any off-the-shelf DAW.

After leaving Motown, Scott continued working on the Electronium for a while. Some say that when he heard about the Fairlight he gave up. For years, his ideas had been ahead of the technology needed to realize them. Now the world had caught up with him. We might never know what he could have achieved in what he called, in 1970, his “cockpit of dreams.” But with hindsight, the very idea is like a portent of things to come.