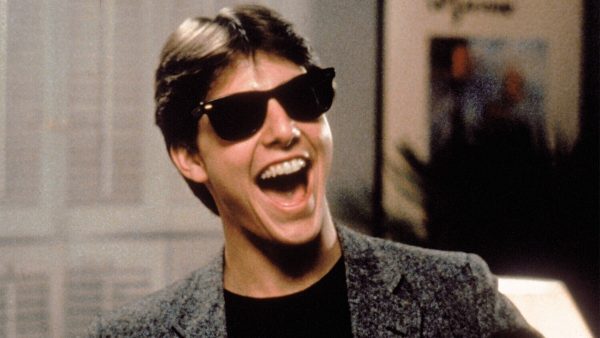 In recent cinematic history there has been a nostalgia loaded fascination with synth scores. The kind of music that was popular through the late 70’s and 80’s, would begin to find itself increasingly used in film. After all, a few solo artists or small groups (like Tangerine Dream) could concoct musical soundscapes on their synths, often at a fraction of the cost of utilising huge orchestras. It thus brought with it an association with cheapness. The rise of video nasties, video horror and straight to video pictures also saw a marked increase in electronic film scores, because those films just couldn’t afford to do orchestral music, even if they wanted to. Increasingly, during the height of electronic music’s popularity, a number of film-makers sought to bring in these artists to score their films. One such group, one of the pioneering electronic bands, was Tangerine Dream. A collective out of Germany that had an ever changing line up (with only founder Edgar Froese staying constant until his untimely death in 2015). In fact along the way my uncle was a member of the band, at their very beginning before breaking big, and then back in the late 70’s for an album (Cyclone) and touring.

Their music, and those like them, would never quite hit with film critics when they first arrived. Often derided or dismissed as being a passing oddity, it would be in this century that a particular boom in popularity would be retrospectively placed upon so many of these great synth scores, not least from Tangerine Dream. They were busy with film composition throughout the 70’s and 80’s before dropping out of fashion somewhat in the 90’s. More recently they composed music for Grand Theft Auto 5, and have certainly had a distinct influence on the music of Stranger Things(several TD tracks have featured in the series too) and the music from Cliff Martinez (particularly in his collaborations with Nicolas Winding Refn).

Tangerine Dreams big break out film. Having heard them in Berlin and been blown away, William Friedkin offered the band the gig of scoring his big budget thriller, Sorcerer. Friedkin’s unexpected choice was merely in keeping with a film that would mark a peak of his cinematic standing. At the time he had virtually carte-blanche. He could do what he wanted, and he was going to utilise that power. Sorcerer is now regarded widely as a masterpiece. A rare example of a remake being as good, if not better than its predecessor. A film of relentless discomfort and gut wrenchingly tense set pieces is enveloped with this wonderful atmospheric score. With stunning, gritty photography, the music is ambient, but once we kick into action those pulsating arpeggiating sequences keep the tension ratcheted right up. The people that appreciated Sorcerer from the beginning, likely appreciated the score as a big part of that. Time has increased the popularity of both substantially.

Michael Mann’s gripping and tense debut (with arguably James Caan’s best performance). The film would be a moderate success all told, though initially, the music from Tangerine Dream was deemed intrusive and not effective at reacting to key moments. Synth scores tend to have an overriding ambience and atmosphere over being scored to particular moments. If you listen to an orchestral score as an example, there might be crescendos to accompany punches etc, or the music could dip into slow melancholy to suit a change in emotion. Synth scores often just creates that overall, sometimes dream-like overlay. It’s a different beast entirely, and indeed, something people appreciate more now than perhaps film fans did back then. Still, TD’s music here is pulsating and energising, put to particularly great use in the robbery sequences.

There might not be a more effective use of Tangerine Dream’s evocative and atmospheric music than in Paul Brickman’s stylish teen comedy. There’s nothing quite like Risky Business in the teen comedy genre. It’s unique. Tom Cruise is Joel, an upper class teenager who ends up setting up a brothel when his parents are away. He gets increasingly thrown into an array of situations after encountering Lana (Rebecca De Mornay), an enigmatic and alluring call girl. The dreamy quality of the film, and romanticised sequences, blend perfectly with Tangerine Dream’s music. Several of the soundtrack pieces have been repeatedly used in other films since, such is the popularity of the soundtrack. Indeed the soundtrack itself, as well as the film, marked the first (and possibly) last association of TD with an instant smash hit.

A breakout leading role for a young Drew Barrymore, following up her early role in E.T. the Extra-Terrestrial. Many synth scores tended to have an association and more fitting cohesion with horror. Oddly, Tangerine Dream’s film legacy is more iconic for their non-horror work, not dipping into the genre as often as one might expect (particularly when you look at how effective John Carpenters scores were in his own films). This is a solid Stephen King adaptation that looks great and the music works brilliantly.

Legend is something of a contentious film. There are two versions of the film and two scores. Critics never warmed to either version, and many still don’t in a film that is incredibly messy. On the other hand, it’s incredible looking with Ridley Scott at peak indulgence. Additionally, in retrospect, it’s blessed with two enthralling scores. Jerry Goldsmith’s music I enjoy, and likewise I enjoy Tangerine Dream’s, both of which accompany those amazing visuals very well. If you can overlook a confused tone (it feels very childish whilst feeling incredibly dark at the same time), and appreciate the amazing sets, creatures and cinematography, you’ll find a lot to enjoy (not least Tim Curry’s exceptionally realised villain).

In a year almost defined by great vampire films, Near Dark was the lesser known cult film to the more iconic Lost Boys. Two wildly different takes on the genre, both of which were fantastic. Near Dark features a broadly etched collection of villains (a strange family of nomadic vampires, lead by Lance Henriksen). When Caleb (Adrian Pasdar) has a romantic tryst with Mae (Jenny Wright) he ends up being turned into a vampire and has little choice but to reluctantly travel with Mae and her morally obtuse family of predators. Beautiful visuals and a dreamy quality mean that the kind of music TD produce, is a perfect fit, and a visual stylist like Kathryn Bigelow creates the perfect visual landscapes to combine sound and music.

In what is probably the most criminally underappreciated film they’ve been involved in, Tangerine Dream produce another ambient and ensconcing score. Miracle Mile, a great example of a one night film where a man looking to meet a date, accidentally receives warning of an impending nuclear attack. He sets about to find the girl and try and get out of the City before it’s too late (encountering problems along the way of course). Miracle Mile was a low budget film that still bombed. Anthony Edwards had been around a few years as a supporting act in bigger films (most notably as Goose in Top Gun), but as the leading man here, was probably not a magnetic enough draw. It’s a shame because he makes an engaging every man thrust into a crazy situation, intent on getting himself and date out to safety. The film has slowly magnetised a growing fandom over the years, and deservedly. Tangerine Dream’s draw seemed to end to an extent after this. They continued to score films here and there but productions were getting smaller, and lacking in the same kind of visionary film-making associated with their best films.