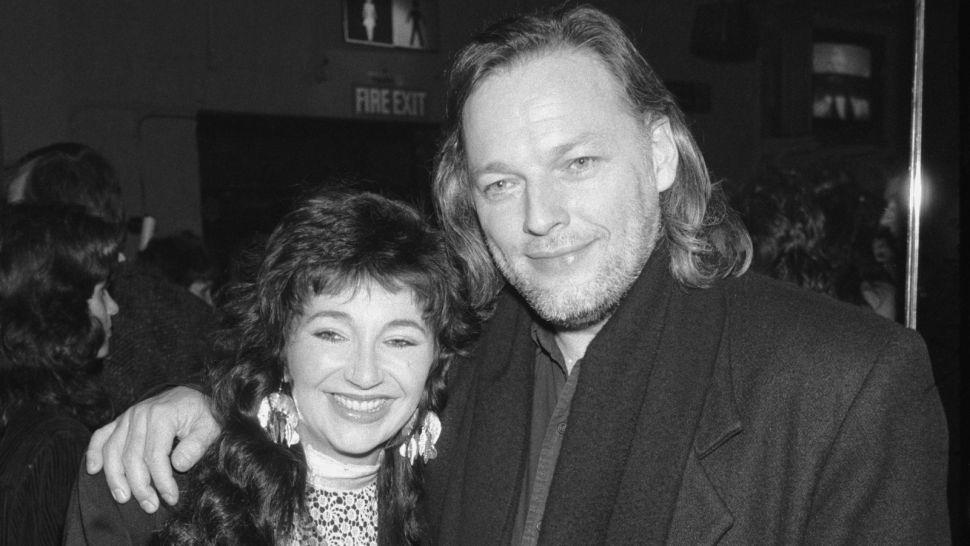 That year, Pink Floyd reached new heights of success following the release of Dark Side of the Moon and the benevolent Gilmour was moved to reach out and help fellow artists.

Having installed a recording facility in his Essex home, Gilmour promptly assembled a crew to assist Bush. It was the first time she had tracked with a group of musicians and this initial studio foray filled her imagination with possibilities. In 1975, Gilmour paid for a recording session at London’s prestigious AIR studios. The results later secured her a record deal with EMI, though Bush would wait until she turned 18 the following year before the contract was fully agreed.

Released in early 1978, Wuthering Heights – the lead single from Bush’s debut album The Kick Inside – was an instant smash, reaching the number one spot in the UK charts where it stayed for four weeks.

Interestingly, Wuthering Heights is noted as the first UK number one to be both written and performed by a female artist.

Throughout the late ‘70s and early ‘80s Bush flourished as an artist, self-producing a string of albums while fulfilling her unique creative visions.

t Hill single managed to reach the number 3 spot in the UK charts while climbing to number 30 in the Billboard Hot 100 US charts, the track reached newfound success in both countries this month, thanks to the Netflix sci-fi horror series Stranger Things.

Released in May 2022, volume one of Stranger Things 4 prominently features Running Up That Hill in the soundtrack.

Held in the clutches of evil, the song serves as a spiritual lifeline for character Max Mayfield as it guides her back to the safety of her friends and saviours.

Set in 1986, Stranger Things 4 is a total nostalgia fest for many, but it appears a new generation of fans have discovered the genius of art rock queen Kate Bush via the series.

Although her live appearances were notoriously infrequent back in the day, this awesome clip from 1987 shows Gilmour joining Bush onstage, headless Steinberger electric guitar in hand, for a spirited rendition of Running Up That Hill.

The guitar parts on the original studio recording were performed by the late Alan Murphy (1953-1989).

A highly respected session guitarist, Murphy played on numerous Kate Bush albums during the ‘80s and was also known for his work with Level 42 and Go West.

Please note: parts of the above text is kindly reproduced from Musicradar, all (c) are with Musicradar and author Rod Brakes.

Stranger Things has taken the world by storm with the release of its fourth season in late last month, and it’s taken with it the song Running Up That Hill (A Deal with God) by Kate Bush, which featured in the season’s fourth episode.

The tune, first released in 1985 on the album Hounds of Love, fit perfectly with the season’s mid-80s aesthetic.

No spoilers ahead, but it plays during a climactic, visually spectacular scene surrounding one of the main characters’ encounters with the season’s villain.While its feature in the show directly brought about the song’s resurgence, it didn’t take long for TikTok to further accelerate its rise to the top of the charts.

A shortened version of the Stranger Things clip has been posted on the app, the original post garnering millions of views in a week and prompting over 500,000 reposts with the same audio. Incidentally, Bush wrote, produced, and owns 100% of the licensing rights to Running Up That Hill. Though the song is now distributed by Warner Music Group, her own company, Noble & Brite, owns its recording rights—meaning she gets every cent the song’s streams rack up. On Spotify alone, the song has drawn 137 million new streams in the three weeks since the Stranger Things episode’s release. Since Spotify reportedly paid artists $0.0033 to $0.0054 per stream in 2021, that makes an average of around $200,000 going to Bush per week during the song’s 2022 revival. Taking radio play and all other streaming platforms -Amazon, Apple Music and YouTube, to name a few- into account, she could be making $36–392 in royalties per play, to add to her speculative net worth value of over $60 million.

The above text is kindly reproduced from Ladbible