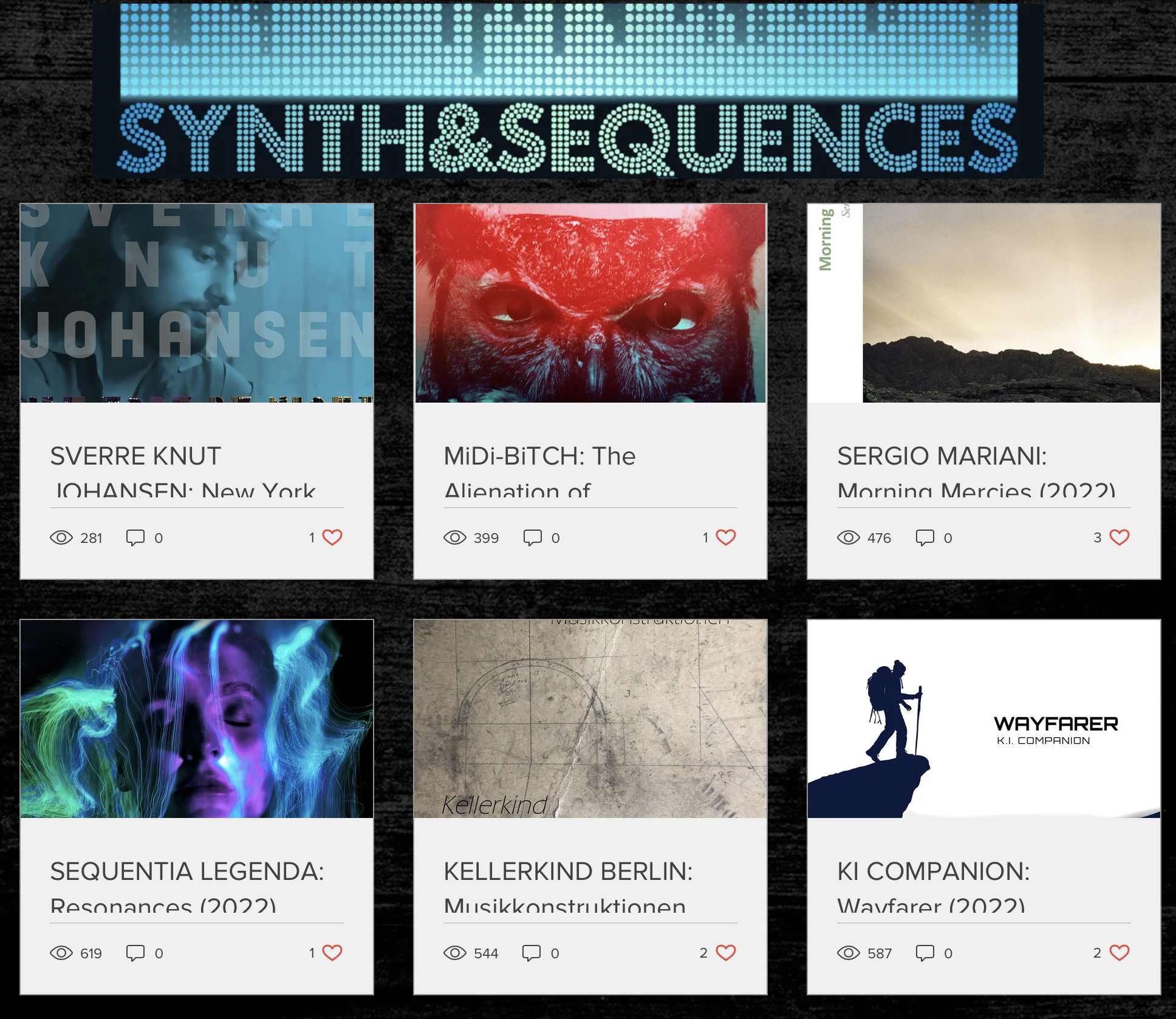 Years ago Sylvain runned a Blog (Synth & Sequences) that got so many visitors that he converted to a website, offering (a lot of) reviews of Electronic Music releases.

The list of available reviews is huge: albums by most familiar Electronic Music artists, from different labels (such as DiN, Groove, AD Music) and the reviews are valuable and pretty to read.

For example, this review of Eloy Fritsch – Cosmic Light, kindly reproduced from Sylvain’s website. For more go and visit synthsequences.com

Hmmm… How many times have I listened to this Eloy Fritsch’s COSMIC LIGHT? At least a dozen or so times, if not more, and to this day I still don’t know which foot to dance on to chronicle it. Awesome. Too pompous. Orchestral at the limits of Synergy’s audacity. Too commercial. Too flashy. In short, one listening and I find it great and the next listening I tell myself that I’ve been carried away by the extravagance of the style of this keyboardist-synthesist who has nearly 15 solo albums since Dreams in 1996. Must say that the keyboardist of the Brazilian progressive-symphonic rock band Apocalypse puts all the effort into it for his second solo album on Groove. Animated by lively electronic rhythms with melodies weaving musical itches, COSMIC LIGHT takes advantage of the very great cultural diversity of the solo career of Eloy Fritsch in a 60 minutes where our ears flutter from one title to another. From one pleasure to another!

It starts well with Gravitational Force and its battalion of scintillating sequenced arpeggios twirling in a gravitational force. The rhythm comes alive early with a good, thrilling bassline that structures the title into an Asia’s musical hymn of interstellar warfare, including the arrival of reinforcements, in a series of musical actions worthy of a good science fiction movie. This is a big progressive electronic rock with good bouncy phases and good earworm-forging synth solos. It’s a vocoder that invites us to Physical Activity. The robot reciting the benefits of physical activity to us, voice effects à la Kraftwerk in Tour de France stick a second charm of the Düsseldorf School. I still don’t know if I like it or not! From the 40th second, a rhythm structure stolen from the first sessions of Gravitational Force is set in motion. It’s catchy and quite easy to tame! Eloy Fritsch knits a highway of rhythms where melodious approaches, catchy choruses and sound effects meet, juxtapose and intermingle in a brilliant 10 minutes if you like this Düsseldorf School and Asia fusion. Artificial Intelligence is a bit in the same genre but expresses itself more on creative electronic rock filled with vocal effects and perched on astonishing percussive effects. My crush was triggered with The Time Tunnel and its synth in the colors of Synergy on an electronic rhythm worthy of belonging to the excellent album Games. A very good track on a lively bass line and a duel between synth dialogues and catchy choruses, not to mention the work on percussions and percussive effects cleverly inserted at the beginning of the track. And what about synth solos? Creative and acrobatic, they fly over an electronic rock from another era.

A big electronic symphonic rock, Spacetime offers an opening centered on a military march. A procession of warriors on another planet enshrouded of analog sound effects on an ascending structure of the sequencer. Moreover, the sequencer likes to compete with the arpeggios sown here and there by an Eloy Fritsch in the shoes of Larry Fast. The structure increases its emotional level, as of its intensity, with a more symphonic sound where are grafted dramatic percussions, including drum rolls, and pompous synth effects always busy weaving harmonious solos among more rebellious effects. A 3rd phase, a little before the 5th minute highlights the architectural work of the Brazilian musician in this title. Placed on a delicate pensive piano, the laments of Theremin of Memories of a Mysterious Dream are as delicious as these cosmic odes of Mannheim Steamroller in Fresh Aire 5 and Fresh Aire 6. A very beautiful title which is born in splendid orchestrations, dividing quite well the rhythmic loads of COSMIC LIGHT. After the nervous and boosted rhythm of Artificial Intelligence, Droids plunges back into this universe of astral poetry of Memories of a Mysterious Dream. The music is stranger with this choreography where two shadows dance without being able to touch each other. There is a little of Legend, Tangerine Dream, and a lot Let The Night Last Forever, by Walter Christian Rothe, on this magnificent track whose echo of percussive effects and vampiric melodies plunge us into the delirium of Roman Polanski in The Fearless Vampire Killers. Secret Path offers a static spheroidal structure with loads of suspended rhythms which serve as the basis for melodies whistled by a synth in a high tone, the other tone being more symphonic. It seems that a war is imminent in the imaginary country of Eloy Fritsch who likes to take up and rework some of his ideas including this sweet ode to reverie granted to Memories of a Mysterious Dream. It’s this base, revisited goes without saying, which brings Cosmic Light Part I to our ears. If there is war, it’s rather a war of emotions, of thrills from the soul. Because the tone is divine and dreamy with an essence of Vangelis in those orchestrations made to melt the romantic in us. Cosmic Light Part II is already well advanced when its rhythmic framework is born from a line with an alternating flow sticking to lascivious arpeggios. The orchestrations that stick to it give these inexplicable chills as the movement of Cosmic Light slowly begins to waltz. Cosmic Light Part III sets apart with a cinematographic and symphonic opening à la Vangelis in a splendid ballad where we find ourselves alone to contemplate the stars crisscrossing the roads of Cosmos, our teenage heart at the mercy of the unattainable one of this first love.There are things that don’t lie! If I remember correctly, I had had my fair share of difficulties getting to grips with the symphonic approach of Journey to the Future. On the other hand, each title had its effect without counting that Spacelab was one of the most beautiful titles of 2019, always according to my tastes. And now Eloy Fritsch does the same to me with this COSMIC LIGHT which is clearly more homogeneous by exploiting its 60 minutes that should appeal to an audience fond of this progressive-symphonic rock of Asia, the daring of Synergy and the reveries of Mannheim Steamroller and Vangelis. Big names, necessary here, in order to better describe this enchanting universe of the Brazilian musician. Finally, here is a very good album! Sylvain Lupari (March 9th, 2021)