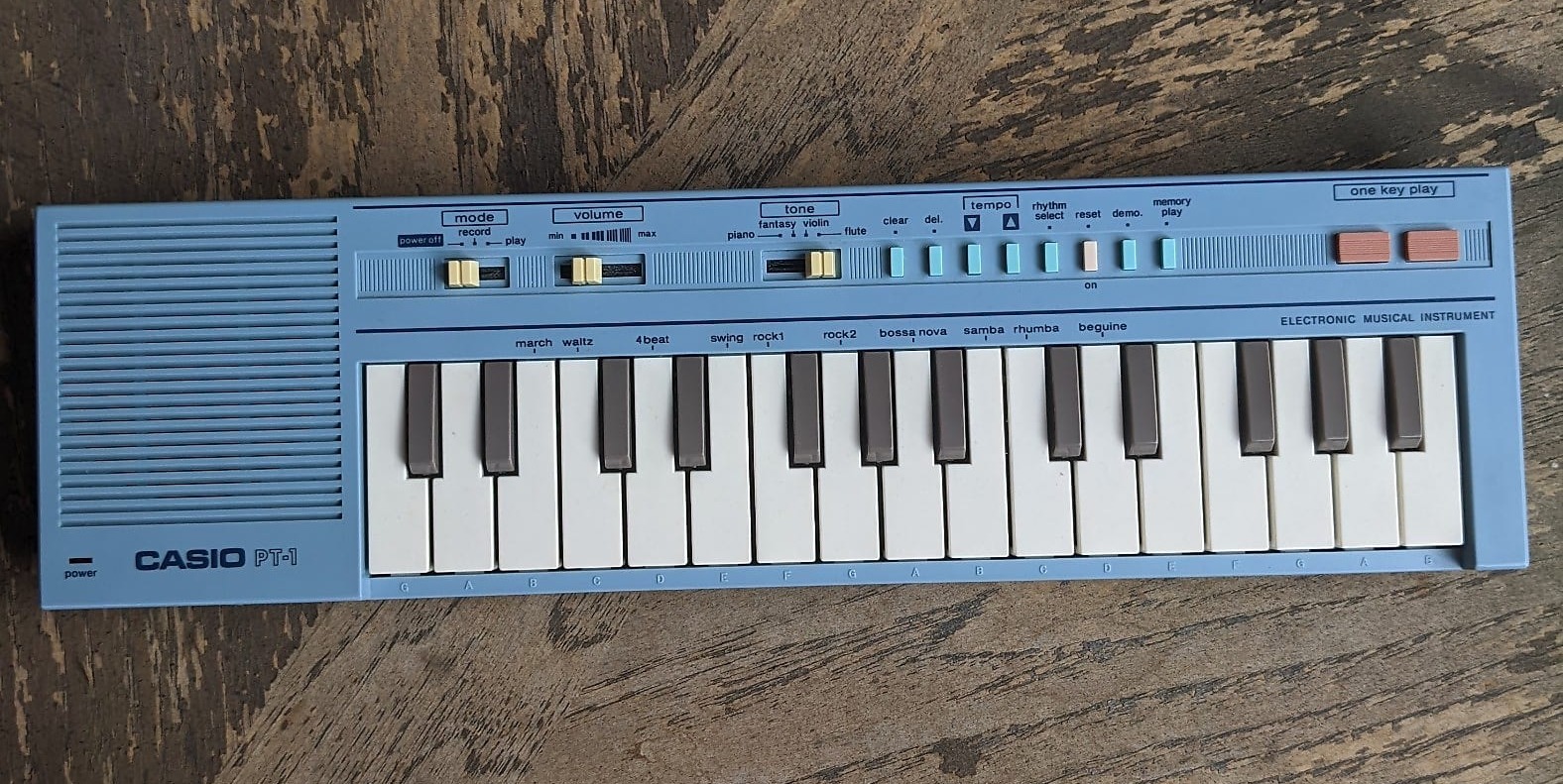 Usully we don’t bother too much with sing-and-songwriters, but we noticed this nice article on John Mayer and his Casio PT-1, published on Reverb.com . Please note that all (c) are with Reverb. You can find the original article here.

Being musicians and music fans, we here at Reverb know John Mayer for his guitar-playing and his best-selling signature Silver Sky. But he’s also deeply invested in a whole other type of gear: watches.

Mayer, the horologist, is as much a figure to fellow watch lovers as he is to Boss BD-2 enthusiasts, sitting down for multiple interviews about his extensive collection and even getting into the watch design game himself.

In recent years, he’s collaborated with the premiere watch site Hodinkee and a brand that, like Mayer, straddles the world of music gear and watches: Casio.

The partnership’s latest creation is the Casio G-Shock Ref. 6900-PT1, a digital watch inspired by the PT-1 Mini Synthesizer.

Casio first built the PT-1 synth in 1982 and continued production until 1988, meaning it was one of the many affordable synths and samplers the company released during Mayer’s early childhood.

The toy-like PT-1 is a monosynth—meaning it can only play one note at a time—but it packs in more features than parents probably expected. While there are just four simple tones (piano, violin, flute, and the mysterious “fantasy”), there’s a built-in drum machine with the same spread of rhythms you’d find on an old Roland or Korg, and—pretty amazingly, especially to a kid—a sequencer.

To really seal the deal for “home keyboard” playing, it can run on four double-AA batteries, has its own speaker, and a headphone output.

John Mayer’s new G-Shock takes cues from his own childhood PT-1, with its blue enclosure, though you can also find the synth in white, pink, black, and red.

If you too were a budding musician in the ’80s and early ’90s, you may remember these models—not just the PT-1, but the whole wide array of kid-friendly Casios, like the PT-80 mini synth and SK-5 sampler.

In fact, Mayer, Hodinkee, and Casio have now concluded a trilogy of releases based around the Casios of Mayer’s youth. In 2020, they released the SK-5-inspired G-Shock Ref 6900 and, last year, they followed it up with a PT-80-inspired limited-edition model.

Since the introduction of the G-Shock Ref 6900, used sale prices for the Casio SK-5 sampler have doubled on Reverb, though how much of that is Mayer’s influence and how much of that is the simple understanding that old Casios make great first synths can’t really be known.