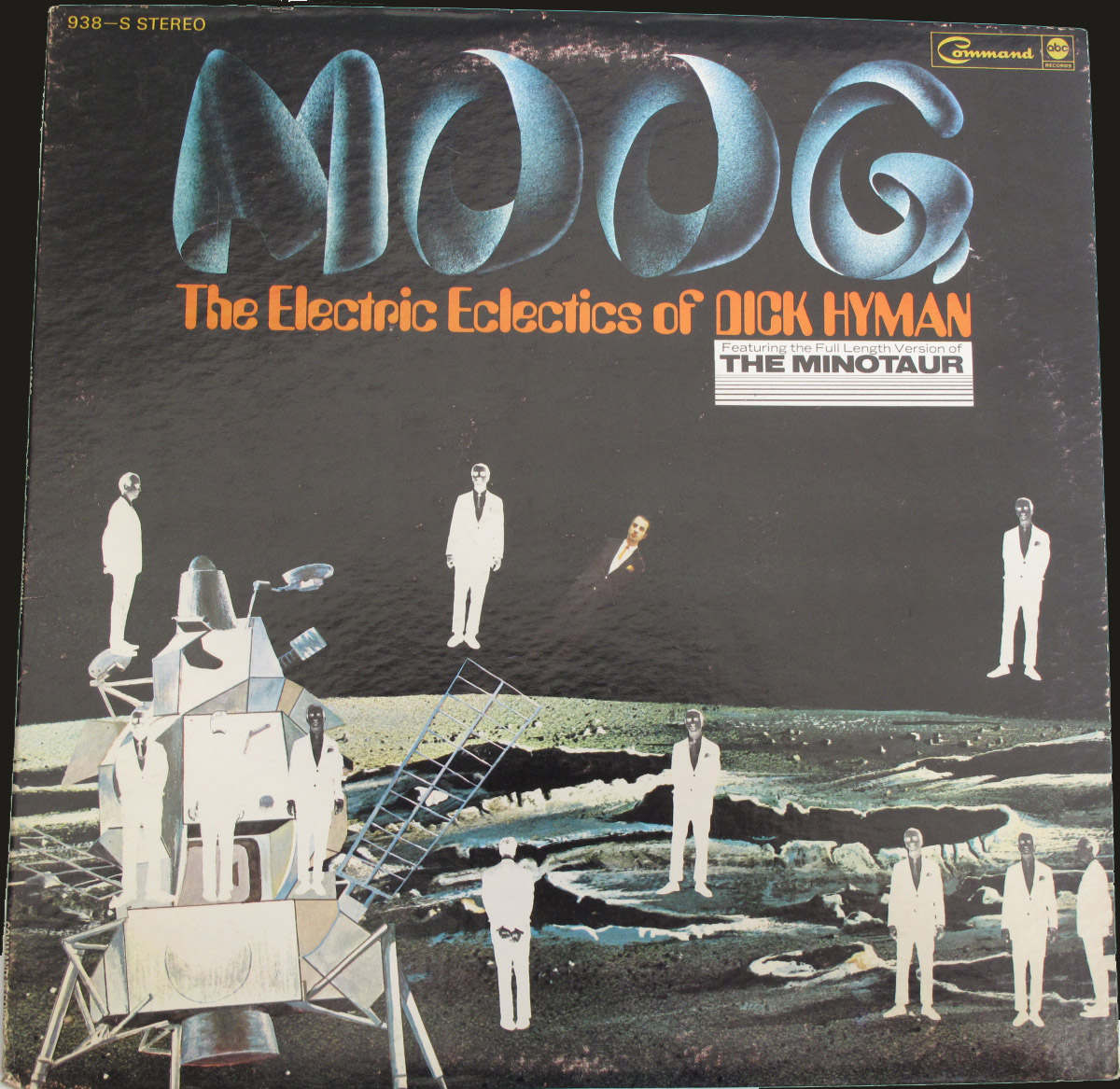 We received this tip about the music of Dick Hyman (thanks Cees Wolvers) and we thought it would be good to find some background information to it… Some parts are taken from the Bob Moog foundation website.

Dick Hyman (b. 1927) was already on his way to becoming a musical legend by 1968 and it had nothing to do with the Moog Modular Synthesizer. Having established himself as a jazz and studio keyboardist, arranger, and composer, he found himself thrust into yet another rolethat of pioneering electronic musician.

At the time, Hyman was extremely busy as a session musician for Enoch Light’s Command label, known for its adventurous recordings of instrumental music and exotic arrangements. Hyman’s New York recording sessions for Command and other companies kept him busy for many years as a pianist, organist, arranger, and occasional player, as needed, of other keyboards.

Then along came Bob Moog’s synthesizer.

When producer Enoch Light (1905-78) heard the Moog, he knew that it had to become a part of the new sound of Command Records. Before long, Light had the most remarkable keyboard player in his organization sitting in front of the Moog to see what would happen, and the results are now part of recorded music history.

For this edition of the blog, Dick Hyman helped me look back at his remarkable recordings with the Moog Modular Synthesizer.

Many early Moog experimenters viewed the synthesizer primarily as a special effects machine. But Hyman, like a select few of his contemporaries including Carlos, Kingsley, Beaver, Krause, and Perrey, recognized the musical potential of this instrument.

Even though the synthesizer resembled, in Dick’s words, “a telephone switchboard,” he quickly grasped the unique tonalities that one could coax from it. As a session musician who spent an enormous amount of time recording in a multi-track environment, Hyman already had the mindset and patience to build interesting music, track-by-track, using the Moog’s monophonic output.

His mastery of Hammond and Lowrey organs also gave him insight into how to shape and play intriguing sounds with an electronic instrument. Hyman’s Moog immersion resulted in two full albums of Moogified jazz-pop, Moog: the Electric Eclectics of Dick Hyman (January 1969) and The Age of Electronicus (August 1969).

From the perspective of popular music history, Hyman’s Moog recordings were by no means the first. I’m aware of at least 45 recordings using the Moog Modular synthesizer released prior to Moog: the Electric Eclectics of Dick Hyman. However, as Wendy Carlos found with the release of Switched-on Bach only about a month earlier, listeners of the time were ready for electronic music that was more than sound effects and psychedelic sounds.

Interestingly, Hyman was working on his Eclectics album around the same time that Switched-on Bach was being released. Hardly a month later, in January of 1969, after reportedly spending 70 hours crafting the album in the studio, Command unleashed Hyman’s first LP of electronic jazz pop.

The accompanying advertisement clearly characterized what they had in mind. While the Carlos disc was for classical music buffs, Electric Eclectics was “Switched-on Pop for ‘Counter’ Revolution!” i

A brief review from Variety repeated the idea that Moog music was for everybody.

Although it wasn’t an instant hit in 1969, “Popcorn” became a hit during the early 1970s for Kingsley and others. In the span of only six months, three of the most influential albums of highly tuneful electronic music had been released, inspired others, sold more synthesizers, and helped spawn a new industry in electronic music equipment.

These records by Carlos, Hyman, and Kingsley became the killer apps that made the future of electronic music possible.

How it was done

Hyman is primarily a musician, not an engineer, so for his Moog music he partnered with audio technician Walter Sear (1930-2010), Bob Moog’s New York sales and technical representative. Sear worked with Hyman by programming the Moog patches and engineering the multi-track recordings. Often Hyman would suggest a kind of sound and the two would explore patches until they found what they liked. ii

“All the recordings on the two albums were done in Walter’s studio,” explains Hyman, “which was in the penthouse of the Great Northern Hotel on 57th Street. I was experienced on the Wurlitzer, Hammond and Lowrey organs, and was able to relate many of the synthesizer’s possibilities to those keyboards. Walter would suggest registrations or tone productions which were new to me; sometimes I would ask him for settings comparable to my experience as an organist.” iii

Command instrumental recording sessions took place in the ballroom of the Great Northern hotel, also known as Finesound because of Bob Fine, the recording engineer. Enoch Light produced and Bobby Byrne and Loren Becker were his assistants. iv Moog tracks were mostly recorded separately in Walter Sear’s studio, and then for certain tracks mixed with prerecorded instrumental tracks.

Enoch Light produced several recordings featuring the Moog and other non-electronic instruments, including drums and brass. Dick Hyman played Moog and other keyboards on some of these, while other times Walter Sear played the Moog.

Hyman, working with Sear, approached each session as one of exploration. Some pieces were totally improvised in this fashion. When Sear had presented a new and intriguing sound, Hyman would work out a melody or pattern, and then build the piece on successive tracks. The “composition” per se was the multi-track recording itself, not a page of written music.

Other pieces were based on compositions by Hyman, newly created for the album, or in some cases older works re-arranged for the new tonal universe offered by the Moog modular. In Hyman’s second album, The Age of Electronicus, most of the tracks were arrangements based on then current recordings by other artists of the time, from The Beatles to James Brown.

Hyman’s memories of making the two Moog albums are vivid. Electric Eclectics primarily consisted of original works composed using the iterative process just described. The Age of Electronicus consisted of cover versions of pop music of many styles, from songs by Booker T., Burt Bacharach, and Joni Mitchell to the most mind-blowing interpretation of James Brown’s “Give it Up or Turn it Loose” you’ll ever hear.

Some of the tracks include additional instruments, such as drums, organ and harpsichord. But the predominant sound on both albumsincluding many instrumental soloswas that of the Moog Modular synthesizer.

Dick explains that “The Minotaur” used a Maestro Rhythm Master drum machine. The Rhythm Master was an early drum box with ten settings for preset rhythms, such as Rock1, Rock2, Mambo, Cha Cha, Bossa Nova, Foxtrot, and others. To use it, you pushed a button and then controlled the tempo with a rotary dial.

“The Minotaur” was recorded as three improvised overdubs on top of a drum machine track, the three parts being the melody, bass line, and the raga-like drone tone. “The drum machine beat was an odd result of combining a waltz with a bossa nova. It was a lucky inspiration, all around.”