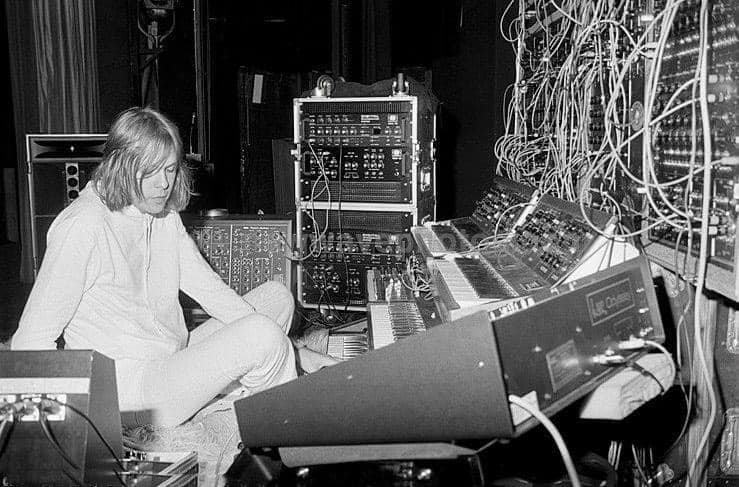 This article, created by Ted Davis, appeared in the Gear History section of Reverb.com. Please note that all (c) are with Reverb and the author. The original article can be found here.

As a member of seminal electronic acts like Tangerine Dream, Ash Ra Tempel, and the Cosmic Jokers, Klaus Schulze spent a lifetime working tirelessly to make a name for himself as one of most influential keyboard players of all time.

The German musician was a pivotal figure in the emergence of Krautrock in the 1970s, going on to drop over 50 albums under his own name. And as if that wasn’t enough, he also released seven collaborative, more commercial-sounding records under the alias Richard Wanfried between the years of 1979 and 1997.

While Schulze is best known for his heady knack for synthesis, he was a percussionist before he was a keyboardist. He cut his teeth performing in a number of local Berlin bands, including one called Psy Free. After meeting Edgar Froese at the short-lived, yet iconic experimental music venue The Zodiak Free Arts Lab in West Berlin around 1969, Schulze started drumming for Tangerine Dream. He was behind the kit on their debut LP Electronic Meditation, but then left the act after a brief stint to help found the proto-New Age jam band Ash Ra Tempel. (He would go on to rejoin Tangerine Dream for a few shows in 1973.)

Schulze laid down the drum tracks for that trio–alongside guitarist Manuel Göttsching and bassist Hartmut Enke–for just one record. After the release of their 1971 self-titled debut and a ton of shows–in true Schulze fashion–he departed Ash Ra Tempel. (However, he would continue to collaborate with them in various capacities in the years to come.) This time, his reason for leaving was to focus on launching a solo career.

In 1972, he put out the first album under his own name, Irrlicht. Centered on imposing organ licks played through a crappy amplifier, it was an ambitious, neo-baroque effort from the up-and-coming avant-garde presence. In the decade to come, he churned out a number of classic records, including 1976’s Moondawn, 1977’s Mirage, and 1978’s X.

Between the 1980s and the 2020s, Schulze built up a seemingly-impenetrable catalog of releases, which were united by a digitized, retrofuturistic aural palette. But while his output tended to be centered on cutting edge analog atmospherics, he still sometimes incorporated organic elements into his work, like electric guitars and human voices.

He even played in the prog rock supergroup Go, alongside Stomu Yamashta, Al Di Meola, Steve Winwood, and Michael Shrieve. Widely considered a master of the Moog, he all-but-invented the Berlin School–a flavor of early kosmische musik that was a bit more ethereal than the work of propulsive krautrock acts like Can and Neu!.

On April 26th of this year, Schulze tragically passed away at the age of 74. After a long battle with an unspecified illness, he left behind a wife and two sons. However, in spite of his old age and health struggles, he still managed to announce one more album before his death: the LP Deus Arrakis, which was posthumously released on June 10th.

It’s hard to imagine the emergence of genres like ambient, IDM, or house without Schulze’s contribution to the progression of electronic music. He was an avid innovator, who never hesitated to push the technological limits of his work. So, in honor of the legacy of “the godfather of techno,” we’re going to look at the powerful musical machines that shaped his sound.

The Moog was a crucial component of Schulze’s formula. Over the course of his career, he cycled through a number of instruments from the Asheville, North Carolina-based synthesizer manufacturer. For an example of how important these products were to his creative process, look no further than his Pete Namlook collaborative albums The Dark Side Of The Moog and The Dark Side Of The Moog 2.

Schulze sometimes used a compact, 32 key Micromoog in his live setup, which was only produced between the years of 1975 and 1979. The monophonic synthesizer was capable of creating a wide range of tones and textures. In the above video, you can hear Schulze lean on it to add arpeggiated washes of treble to a 1977 on-stage set.

In this same video, he also plays a Polymoog, which was a hybrid polyphonic synthesizer–it dwelled in the same vein as other popular pre-1980 organs and string machines. Its tastefully groovy presets made it well suited for disco and ambient musicians.

Another one of the main synths from the company he employed was the coveted Memorymoog. It was the last polyphonic synth to be produced by the company before they declared bankruptcy in 1987, and is famous for its luscious, funky sound. But while it’s one of the most sought out synths around, it’s famously more of a studio powerhouse than a road-ready workhorse.

In the recording of this show, he shreds on the now-coveted, then-affordable  Minimoog Model D as well. This synth was one of the brand’s first accessible releases.

He was also a fan of the company’s early Modular synthesizer—a “Big Moog” that comprised of IIIp and a Sequencer Complement B expansion cabinet, bought in 1975 from Florian Fricke of Popol Vuh. An entire wall of his home studio was dedicated to the instrument, which he used to patch different sounds.

Schulze may have been known as the master of the Moog, but he was fond of other synthesizers as well. He was rarely content to play the same instrument for long, and so the list of keyboards that cycled through his studio is lengthy.

The first synthesizer Schulze ever purchased in the 1970s was an EMS Synthi A, which became a staple in both his live and recording setups for years to come. He loved the atmospheres that he could craft with its alluringly flawed oscillators. Because of its rickety nature, it was almost impossible to replicate the same sound multiple times, and Schulze embraced this chaos.

Schulze was also fond of a number of Roland products. He incorporated a Roland Super JX-10 into his rig, which produced a bevy of sounds, ranging from wiry strings to blocky electric pianos. He also used a Roland JD-800, which was a digital synthesizer known for its plethora of knobs and sliders. These features made it a powerful tool for patch editing and performance control.

On top of that, he used a Roland U-110 ROpler module, which was the company’s first dedicated sample playback synth. He played a Roland D-50, too, which was famous for its subtractive synthesis, on board effects, and joystick modulation. The sounds of a Roland Fantom G7 appeared on some of his recordings as well.

And while Schulze certainly exhibited some favoritism towards Roland and Moog, he did own synthesizers from a number of other companies. For a wide range of sounds, he employed the dexterous Crumar GDS, which could produce anything from plonky pseudo-xylophones to jagged soundscapes. He also used the Alesis A6 Andromeda, which was a 16 voice, 16 channel multitimberal piece of equipment.

For bass sounds, he sometimes played a Novation Bass Station II, while for keyboard sampling he tapped in a Sequential Circuits Prophet 2000. And for wubby basses, he frequently called upon the ARP 2800 Odyssey Rev 1. As a vocoder, he used the DSP chip-centric Alesis ION. Plus, he was occasionally spotted with a Korg MS2000.

While this list of synths is definitely extensive, it barely even scratches the surface of products that Schulze owned in his lifetime.

In the 1970s, Schulze founded his own recording studio, called Moldau Studio. It was nestled somewhere deep in Germany’s Lüneberg Heide forest, and was fairly difficult to find without detailed directions. Jam packed with synths and recording equipment, it was a high tech playground for a musician who rarely let himself get comfortable working with the same gear for long.

At the center of the studio was a 36 channel Soundcraft 6000 mixing desk (he was known to use an Alesis 32 mixing console as well). He preferred larger consoles, because he loathed patching things in and out of his mixers–this piece of gear featured 92 inputs, so he could start recording anything almost immediately.

Schulze used a Quasimidi Cyber 6 as his master keyboard for midi sequencing, which was a powerful early tool for DAW integration. In his younger years, Schulze employed a Revox B77 tape recorder as his reel to reel. However, later on once he had transitioned to digital production, he used an Apple Power Mac G6 as his computer, which was loaded with a number of plugins and VSTs (Schulze used an Apple Powerbook in his live performances). He listened back through a pair of Event PS6 studio monitors.

This core digital workstation was boxed in by outboard equipment, which Schulze referred to as the “Big Wall.” This setup contained a number of synths–six Quasimidi Rave-o-lution 309 grooveboxes, six Quasimidi Polymorph sequencer/synthesizers, and four Access Virus synthesizers. The rack also featured a Doepfer MAQ 16/3 sequencer, and a mixer. Although few people actually saw this elaborate rig in person, he did use it live at a 1997 concert in Osnabrück, Germany. He had a master controller hooked up to all of the synths in his studio, so that his sprawl of keyboards was essentially remote controlled.

Schulze’s studio was packed to the brim with outboard equipment, too. Some of these pieces of gear included a TC Electronics M-One dual effects processor, an Eventide H3500 Ultra-Harmonizer, (he also used an Eventide Harmonizer H939t), a Roland SRV-2000 MIDI digital reverb, and an Alesis C LX-440limiter and compressor.

The space also featured a detached cabin for recording singers and acoustic instruments.

Schulze may have been best known for his forward thinking knack for electronic instrumentation, but synths and outboard gear weren’t his only tools of the trade.

He owned a few guitars, including the timeless Fender Stratocaster, a 1958 Hofner President Acoustic Archtop, and a Martin Standard Series D12-28 12-string. Sometimes he would play these guitars through pedals, like the TC Electronic Spark Booster and the TC Electronic Stereo Chorus Flanger. He also laid down electric basslines on a Hofner Verythin.

When Schulze wanted to use an outboard drum machine, he frequently programmed beats on the Alesis DM-10. It was a drum module, which has now evolved to be its own entire standalone electronic kit.