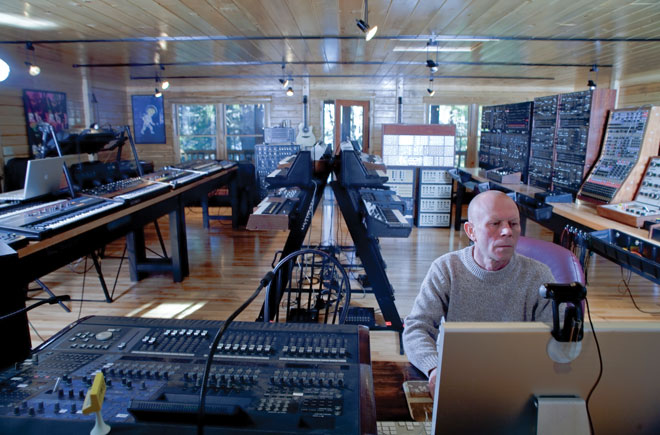 This article appeared in the Maine magazine in 2010, featuring a visit to Vince Clarke’s studio ‘The Cabin’. We have also added a video of Vince Clarke explaining the Cabon.

Please note that the article, pictures and video are owned by the authors.

By Peter A. Smith, Photographs by Nathan Eldridge

Walk into Bubba’s Sulky Lounge in Portland on a Friday night and you’re bound to hear Depeche Mode’s “Just Can’t Get Enough” and Erasure’s “Always.” What do they have in common? The man behind the irresistible pop songs, who has written and programmed three decades’ worth of uberbuoyant music, lives and works in Walpole, Maine. Step into Vince Clarke’s fantastic Futuristic world.

Down a gravel drive, the little log cabin sits up on the banks of the briny Damariscotta. A tire swing hangs from a yellow rope in the forest. A plastic kid’s truck lies spilled out in a ditch.

Inside the cabin, an electronic orchestra of pulsating melodies—whooshing glides over a steady synthetic pulse—fills the pine-paneled studio. The cabin-sized motherboard is packed with keyboards and filter racks. Moogs, Korgs, Rolands, a Kobol, and a wall of modular racks assemble a W-shaped control panel. These are the machines that made synthpop.

There’s the Movement drum machine Dave Stewart of the Eurythmics used to make the 1983 album Sweet Dreams (Are Made of These), a little programmable Roland drum machine similar to the one used in Phil Collins’s 1981 hit “In the Air Tonight,” and the monophonic Moog Source that Dave Gahan played on Depeche Mode’s 1981 debut album, Speak & Spell. The cabin also houses a theremin, a tape machine, and a Moog Modular from the late 1960s with such unstable sound quality that it requires tuning every two minutes.

The equipment is hardwired into a Mac, where Vince Clarke sits, tapping the desk with his fingertips and sipping black tea.

Vince Clarke has carved out a reputation as a successful pop musician and a dedicated user of analog synthesizers. “I got into collecting for the sake of collecting,” he says. “Now, I really want to buy the stuff to make music—not just because the machines are rare.”

Neither Clarke, who turns 49 this year, nor his music shows much sign of slowing down. He’s currently producing another Erasure album due out this fall, remixing songs for Franz Ferdinand and The Saturdays, and tinkering with an album of cinematic Tim Burton–esque children’s songs.

Last October, Clarke went to New York for four weeks to record the rough outline of what will be his 20th studio album, his 12th with Andy Bell, 2 the other half of the band Erasure.

The two start low-tech. Clarke plays acoustic guitar; Bell sings. They record the songs onto a mini-cassette tape. Since Clarke returned to Maine, he has been breaking out the basic melody ideas, arrangements, and chord structures—alone in his cabin full of machines.

When Erasure plays live, Bell sings like a flamboyant, modern-day choirboy. Clarke remains who he is: the geek behind the keyboards. Erasure represents an odd-couple duo, and they collaborate best together by working apart. “We write the best songs when I have no technical distractions,” Clarke says. “I could have Andy here, but Maine would drive him mad. He lives in London.”

Clarke takes a quick break for more black tea with two sugars and a Marlboro Light. He works ten hours a day, five days a week. When he finishes, he sends the songs to Bell, who will write lyrics as he programs the songs using his collection of instruments, each with its own signature circuits and sound.

Whether it’s Lady Gaga, Rihanna, or Gwen Stefani, musicians are still toying around with vintage synth sounds. Clarke continues to play the machines because he likes the physicality of patching cables and tweaking knobs, rather than using a mouse. What results is pristine electronic music with his fingerprints all over it. “Every time you start making a sound on these keyboards, it’s going to be different,” he says. “You’re not repeating yourself. With modern soft synths, they all have memories and banks of sounds. One of the dangers in that is that you tend to go for sounds that you like and you’ve heard over and over again.”

In 1980, Depeche Mode played at Crocs in London. Clarke was 19. He had a tuft of bleach-blond hair. He thrust his hips and played a monophonic keyboard. He would leave the band shortly after the release of its first album. He went on to create Yaz with Alison Moyet and Erasure with Bell. Clarke remained a pioneer in a wave of British musicians who reimagined a world ruled by machines, a place where science fiction became fact. “It was a fantastic time. We weren’t trying to be Rockabillies. We weren’t trying to recreate the seventies. It was completely new.” His latest album is infused with that same giddy technological optimism—more like The Buggles’ “Video Killed the Radio Star” than Kraftwerk’s Computer World.

Clarke moved to the States in 2002 to be with his girlfriend, the publicist Tracy Hurley. He put Ammonite, his spiral-shaped glass home in Surrey, on the market. The couple lived in New York and would visit Maine on vacation. They married in 2004, moved to Portland, and finally bought a place on the Pemaquid Peninsula.

Meanwhile, Andy Bell was working on his solo Electric Blue (2005), so Clarke had time to fill the cabin with all his gear. “It was just fantastic. I hadn’t seen this stuff for four years. I dusted it all off, and most of it still works.”

The cabin came off the shelf. It’s sparse and clean. It’s easy to imagine snow flurries whirling outside. On one wall of the cabin is a poster of a cosmonaut that says Space Is For Everyone in Russian. It’s a mission statement: As if he, Vince Clarke, a sonic explorer of the future, could be anywhere. But he’s chosen this secluded spot on the Damariscotta.

“This place is very beautiful. I don’t intend on writing songs about trees, but it’s a very peaceful spot, and where you are dictates your state of mind and influences your music.”

Outside Clarke’s cabin and the still-beating heart of electro-retro-Futuristic synthpop, the wind whispers in the pines, a barely audible shwoosh in the Maine quiet.